What's in store for the encore after Tampa and Boston exploded for 21 runs on 33 hits in Monday's series opener? Find out why we're expecting more fireworks at Fenway Park on Tuesday in our Rays vs. Red Sox picks and predictions.

After giving away a much-needed win in yesterday's series opener, the Boston Red Sox will send lefty Eduardo Rodriguez to the mound at Fenway Park on Tuesday in hopes of evening up their series with the American League East-leading Tampa Bay Rays.

Boston, clinging to one of the final playoff spots in the AL, coughed up an early 7-1 lead and was ahead 9-7 going into the eighth before an eventual 11-10 extra-inning loss.

Check out our free MLB betting picks and predictions for Rays vs. Red Sox on September 7.

Drew Rasmussen (1-1, 3.38 ERA): The 26-year-old has thrown well for the Rays since joining the rotation last month. He has a 1.59 ERA over four starts while holding batters to a .155 average. Rasmussen has better than a 3:1 strikeout-to-walk rate over that stretch and is coming off a season-high 74-pitch outing against Boston in which he struck out five over four innings.

Eduardo Rodriguez (11-7, 4.88 ERA): Rodriguez has had a disappointing season but has found a bit of a groove recently, pitching to a 2.73 ERA with 35 strikeouts and 11 walks over his last six starts. Still, he was roughed up hard in one of them, allowing five runs over 3 2-3 innings to Texas on August 21, and is still susceptible to the blowups that have ballooned his ERA to a career-worst mark.

The Over is 13-3-1 in the last 17 meetings at Fenway Park. Find more MLB betting trends for Rays vs. Red Sox.

Boston has stumbled at the wrong time, as a combination of shoddy play and then a COVID outbreak has seen the club in a dogfight for one of the two wild-card spots in the AL. The Red Sox enter Tuesday holding the second spot, 0.5 games behind the Yankees, with both the Mariners and Blue Jays three games back of Boston, while the A's are 3.5 games out.

The Red Sox got out to a blistering 50-31 start through three months but have gone 29-30 since July. While they are still mashing, pitching inconsistencies remain a problem for them. One of those arms who has battled through an up-and-down season is tonight's starter, Rodriguez.

The southpaw is throwing better recently but has been tattooed for much of the season, despite a career-best strikeout rate and career-low walk rate. He's stranding runners at one of the worst rates in the AL and his MLB-high .354 batting average on balls in play (among pitchers who have thrown 100-plus innings) hasn't done him any favors, either.

He is coming off a strong start against these very same Rays, but that came at the pitcher-friendly Trop. Now he'll get one of MLB's most potent lineups — that has been mashing lefties — at Fenway Park, where Rodriguez has been torched this year, pitching to a 5.69 ERA over 10 starts.

While his counterpart, Rassmussen, is still working himself up after transitioning to the rotation last month, he has thrown well in a starter's role and has given the Rays good innings despite the lower pitch counts. Two of his last four starts came against the Red Sox, and he held them a combined two runs on four hits over eight innings, while punching out nine and walking two.

Rasmussen might not last as long, but the hard-throwing righty gives the Rays the starting pitching advantage for this matchup, and Tampa's edge in the bullpen is enormous. We can't confidently back Rodriguez at Fenway against the AL's best team, which has won 16 of its last 20 and can be had at a great price.

What will be the encore after yesterday's 21-run, 33-hit explosion? It's hard to bank on that sort of offense again... but we're still expecting more fireworks.

That either means riding out the starters or potentially turning to non-preferred arms, depending on who needs a breather. Based on Rodriguez’s struggles, it’s tough to envision him shutting down this lineup for extended innings, while Rasmussen hasn’t reached 80 pitches in a start this season. Not that these offenses need much help, but this can only work to their advantage.

Tampa is second in baseball to Boston in slugging and OPS against lefties over the last month and trails only the Red Sox in the AL in homers versus southpaws over that same stretch. Franco and Mike Zunino have an OPS north of 1.000 against lefties this year, while Arozarena has a mark of .922.

Against all pitchers, the Rays have the No. 1 OPS in the majors post-All-Star break and are tied with the Blue Jays for the most homers. Boston, meanwhile, is second in slugging and third in OPS on the year.

The Over is 8-1 in the Red Sox's last nine home games and has gone 13-3-1 in the last 17 games Boston and Tampa have played at Fenway. These teams are littered with weapons up and down the lineup and with the Rays getting a juicy matchup versus Rodriguez, there's no way we're hitting the Under. 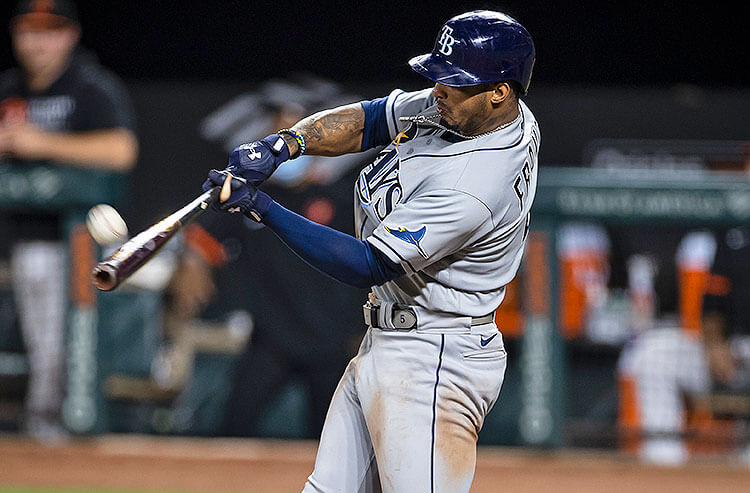