It's hard to believe, but we've finally reached the final day of the 2022 WNBA season. With Vegas looking to secure the No. 1 spot, will Seattle be able to play spoiler? Find out in our WNBA betting picks and predictions for Storm vs. Aces.

It feels like only yesterday the WNBA season was just getting underway, but the finish line is now within sight. The final day of the regular season is here, and all twelve teams are in action. Our WNBA picks and predictions are zeroing in on the marquee matchup between the Las Vegas Aces and the Seattle Storm.

When these teams meet they are generally highly competitive affairs — but with Vegas fighting to win the No.1 overall seed and the Storm locked in at the four spot — will there be much for the away side to play for?

Check out our WNBA betting picks and predictions for Storm vs. Aces on Sunday, August 14.

The Storm are 1-4 ATS in the last 5 head-to-head meetings. Find more WNBA betting trends for Storm vs. Aces.

Storm vs Aces picks and predictions

For a few WNBA teams, Sunday is the final time they’ll play this year. That’s not the case for the Seattle Storm or Las Vegas Aces though, both of whom have championship aspirations.

The end of the season is a tricky time for basketball bettors, true in the WNBA just as it is in the NBA, because the incentives can sometimes be hard to judge. Not every team is equally invested in winning, so it’s critical to glean as much as possible about which teams are playing for something meaningful, and which are inclined to rest and prepare for the playoffs.

This is a road back-to-back for the Seattle Storm — a significant disadvantage — against arguably the most talented team in the “W”, who are also tied with the Chicago Sky for the league's best record. That tie with the Sky is important because it means that the Aces could secure the No. 1 overall seed in the playoffs with a win on Sunday.

Unlike many teams near the top of the conference, the Aces absolutely have something to play for on the final day of the season.

Seattle finds itself in the opposite position. It's locked into the fourth seed no matter what happens Sunday and is most likely already mentally preparing to play the Washington Mystics. There has not yet been any official word about the Storm potentially resting key players for this matchup — which is a bit surprising— but it also creates a small window of opportunity.

If word does arrive before tip that Breanna Stewart, Sue Bird, Jewell Loyd, or Tina Charles are sitting, then this line should rocket back up to over double digits. Even if they do play, the disparity in motivation is simply too much to ignore, and the Storm will pack it in if the Aces show the requisite level of urgency.

Which is to say nothing of the recent history between these two teams, which also favors Las Vegas. The Aces are 4-1 against the spread in their last five meetings.

Vegas is motivated, at home, have a rest advantage, and has gotten the better of the Storm more often than not in recent memory. All of that points to them comfortably covering on Sunday.

Historically, these two teams play high-scoring games, with the Over cashing in seven of the last 10 meetings between them. I’m expecting that trend to hold tonight, for a few reasons.

The Aces are the most dynamic, explosive offense in the “W”. The point guard play of Chelsea Gray has been nothing short of breathtaking in recent weeks, and she has a SportsCenter Top 10 worthy pass on seemingly every night. A’ja Wilson has likely locked up the league MVP, and Kelsey Plum should be a shoo-in for Most Improved. When they find their groove, they can pour it on like no one else.

The Seattle Storm are one of the few teams capable of (sometimes) slowing them down, but it takes immense discipline, effort, and focus. That’s a lot to ask of them for a game that means less than nothing to Seattle and everything to Las Vegas. This line wouldn’t be unreasonable even if the Storm were likely to give a full effort, but supposing that they won’t, it becomes a strong value.

Another factor favoring the Over is the unfortunate absence of Dearica Hamby, who is set to miss 2-4 weeks with a knee contusion. Hamby is the beating heart of the Aces' defense and their best wing defender. Her loss hurts the Vegas defense Sunday and heading into its first-round matchup.

Without her, I think the Storm are going to score just enough for the inevitable Las Vegas 3-point avalanche to take this total over the line.

The Aces are going to officially finish with the league's best offensive rating, and at 109.2 it wasn’t particularly close (they’re nearly four points ahead of the second-place Chicago Sky). The Storm’s offense didn’t track as nearly as formidable, and their defense, while stellar, is not good enough to make up the gap. What has plagued Las Vegas since about midway through the season has been a lack of focus, edge, and killer instinct.

That’s even reflected in their record ATS. While they’ve struggled to cover consistently, they’re actually better at covering against stiffer competition. They’re 4-1 ATS in their last five games against teams with a winning record.

With a chance at the league's best record on the line today and multiple do-or-die playoff games in their immediate future that should all be over and done with now.

Playing at their best, the Aces should outclass the Storm, and it’s why I like Aces -5.5 as the best bet on the board.

Did you know that if you parlayed today’s WNBA Storm vs. Aces predictions and picks in a single-game parlay, you could win $26.45 on a $10 bet? 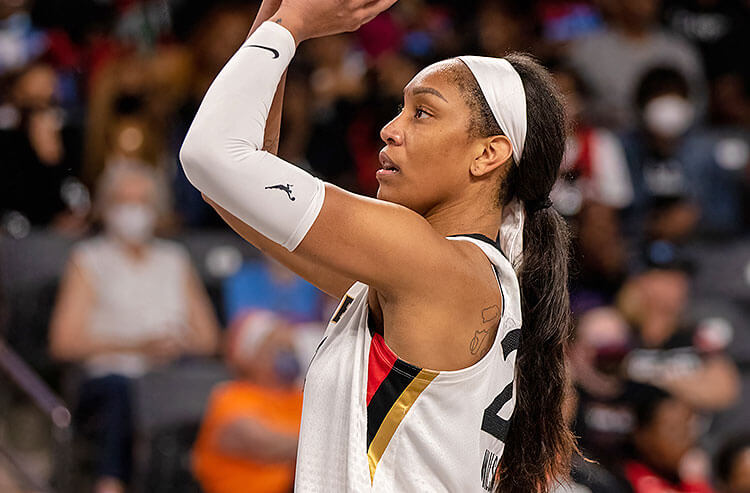