With the 2022 WNBA season a few games in, we're getting our first glimpse at a packed title race. The Aces (+240) are off to a roaring 7-1 start, maintaining their preseason status as the team to beat in WNBA championship odds.

WNBA Championship odds are here as the 2022 season is underway, and sportsbooks are anticipating a dogfight among the league's best teams.

Last season, a tightly-packed WNBA playoff bracket was turned on its head when the sixth-seeded Chicago Sky topped the fifth-seeded Phoenix Mercury to capture the 2021 title.

Will we see more upsets in 2022? With a few weeks of action in the books, let's take a look at the live betting odds to win the WNBA Championship.

WNBA Championship odds, courtesy of bet365, are current within five minutes. Analysis below may not match live odds.

Favorite to win the 2022 WNBA championship

Concerns of Liz Cambage's departure may have been overblown.

Despite losing the All-Star center in free agency, Vegas held onto 2020 MVP A'ja Wilson and can help mitigate Cambage's loss with the re-signed Kiah Stokes. Kelsey Plum and Chelsea Gray return to form a dangerous backcourt, while new head coach Becky Hammon comes with a great pedigree after several seasons under NBA legend Gregg Popovich with the San Antonio Spurs.

At 7-1 on the season thus far, the Aces have five double-digit wins and a league-best 13.2 net margin, with Wilson providing another stellar campaign and Plum and Jackie Young in the midst of breakout seasons.

The Sun returned most of their core in free agency, including reigning MVP Jonquel Jones, and maintain a top spot on the WNBA title odds board despite mixed results in the early going.

Connecticut dropped an 81-79 nail-biter to New York in its season opener, only to turn around and win four straight, including a 27-point revenge drubbing of the Liberty. The Sun then fell flat against a possible surprise Dallas team May 24, choking away a double-digit halftime lead to lose by eight.

They'll get a chance for revenge Wednesday night before a tough schedule stretch has them face the Mystics, Aces (twice), Mercury and Storm.

The reigning champion Chicago Sky are running it back, for the most part, this season, returning free agents Courtney Vandersloot, Allie Quigley, and reigning Finals MVP Kahleah Copper alongside Candace Parker. Departed Stef Dolson and Diamond DeShields were both hits to the Sky's depth, but adding 2019 Finals MVP Emma Meesseman is a great insurance policy.

Early returns are generally positive, with Chicago sitting 4-2 after narrow losses to Seattle and L.A. (the latter in overtime). With six players averaging double-figures, the Sky continue to be one of the league's most balanced attacks, while countering with an always-stingy defense (fourth in opponent points per game).

Seattle's star trio of Breanna Stewart, Jewel Loyd, and Sue Bird are back for the latter's farewell WNBA season, solidifying one of the league's best foundations. To boot, the Storm went out and swiped Briann January from the rival Sun, bolstering its backcourt depth and defense.

After struggling out of the gate at just 1-3 (missing Stewart for two games), back-to-back wins over the Sparks and Sky have leveled Seattle at .500. Stewart and Loyd bookend the League's Top 10 in scoring as the Storm seek a new identity after several seasons as the league's best defensive team.

Adding their names to an already-crowded title chase are the Washington Mystics, currently an East-best 6-2 and the only team to beat Las Vegas so far this season.

The return of two-time MVP Elena Delle Donne has undoubtedly sparked a resurgence for Washington, who finished 12-20 last season and 9-13 in 2020 with their leader mostly sidelined.

The Mystics are the WNBA's stingiest defensive team thus far, giving up a league-low 72 ppg while ranking Top 3 in both opponent field goal percentage and turnovers forced.

Sportsbooks will post odds for the WNBA Finals as early as late January. These odds are constantly adjusted throughout the offseason as players get injured or are traded. Once the regular season begins (usually in May), title odds will change daily as teams win and lose games and more roster changes occur. Sportsbooks will also adjust the WNBA odds based on handle and liability to certain teams.

This means that on a $100 bet, you'll stand to win $300 if the Mercury win the WNBA title. If it's close to the end of the regular season or even during the playoffs and the WNBA has a particularly dominant team, you might see a team with a minus sign (-) ahead of its odds.

Above we have posted the American odds for the WNBA championship. However, these are easy to convert to decimal odds or fractional odds with our odds converter tool. And don't forget to check out our WNBA forum if you're interested in chatting with other basketball bettors about WNBA odds.

The Houston Comets, Minnesota Lynx and Seattle Storm have all won four titles, most all-time.

The Houston Comets four-peated as champs in the WNBA's first four seasons (1997-200), while the L.A. Sparks also went back-to-back in 2001 and 2002. Despite numerous teams winning two in three seasons, none has gone back-to-back since. 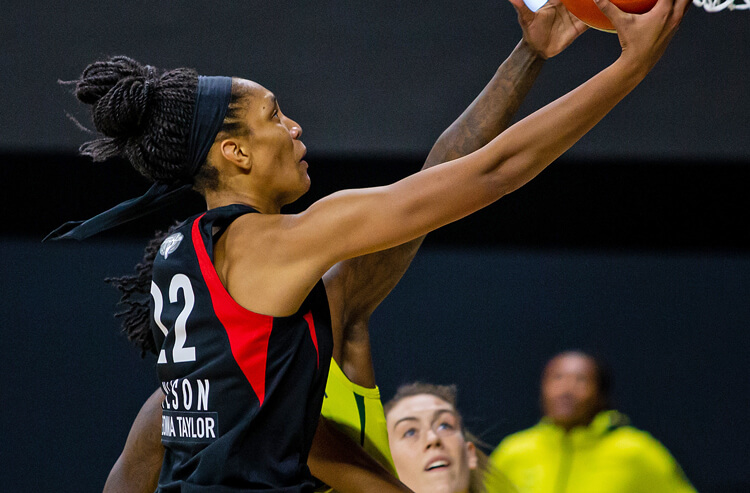