With the Sparks in freefall following Liz Cambage's exit and the Liberty in need of a win to keep their playoff hopes alive, our WNBA betting picks and predictions are all in on Sabrina & Co. to win and cover the 5-point spread.

The WNBA Playoffs are just over two weeks away, but there remains serious unfinished business as teams all over the standings scramble for better postseason positioning.

Two teams at the bottom of the bracket just vying to get into the playoffs — the Los Angeles Sparks and New York Liberty — square off today, with the loser one step closer to seeing their postseason hopes dashed.

This is a matchup of two wildly inconsistent teams and drastically different basketball philosophies. Our WNBA picks and predictions take a deep dive into both teams' statistical profiles to see where the best betting value lies.

The Sparks are 1-7 against the spread in their last eight games. Find more WNBA betting trends for Sparks vs. Liberty.

Sparks vs Liberty picks and predictions

These Sparks and the Liberty have not exactly covered themselves in glory recently. The Liberty are just 3-7 in their last 10 games, and the Sparks, losers of three in a row, are 4-6.

The Sparks are winless since the departure of Liz Cambage, and it appears that there is no quick fix on the horizon for a team that has been underperforming all year long. They’ve limped to a 1-7 record against the spread in their last eight games overall.

The Sparks are just mired in dysfunction and uneven play. They can’t seem to put together a full quarter of consistent effort, let alone a full 48 minutes. At times, like in the fourth quarter against the Minnesota Lynx on July 31 where they nearly erased a 20-point lead, they look like a team that should be better than this. However, most times the team just doesn’t gel and is only saved from abject embarrassment by a standout individual performance, usually by Nneka Ogwumike.

The Liberty, meanwhile, are coming off an impressive 20-point win against the Phoenix Mercury, who they’re desperately hoping to overtake in the standings for the right to the last playoff spot. Their 11-18 record has them in a precarious position, and they’ll need to grind out a win tonight against L.A. to give themselves a chance.

The Liberty take more threes per game than any team in the WNBA, and they hit them at a Top-4 rate. That’s the beginning of a recipe for a pretty good offense, but even the best perimeter offenses need to balance their 3-point shooting with some interior scoring. It’s a balance this young New York Liberty squad has yet to strike. They have the lowest free throw rate in the league and are tied for scoring the fewest points in the paint.

Against quality competition, the Liberty’s all-perimeter offense often runs out of steam, but the Sparks are their ideal opponent. Los Angeles allows a high volume of opponent threes, and also by far the highest opponent efficiency — L.A. opponents shoot a shocking 38% from deep.

It’s easy to see why this total has been steadily rising since it opened last night. The Liberty are inconsistent but are more than capable of absolutely explosive offensive performances against the right matchup.

The Sparks' dearth of perimeter defensive talent suggests this may be one such matchup. Furthermore, the Over is 5-2 in the Sparks' last seven games.

New York’s offense is predicated on ball movement and shooting, an effective recipe in the modern game, but this is a team still firmly in its developmental stages, and that style of play, though efficient once fully formed, contributes to their costly turnover problem. They allow among the highest points off turnovers and opponent fast break points in the WNBA, something the Sparks will capitalize on.

The Sparks also allow a lot of fast break points but for different reasons. When almost every shot you take is right at the hoop, every opponent defensive rebound has the potential to key a 5-on-4 fast break opportunity.

For the Los Angeles Sparks, interior scoring is their raison d'etre. They abhor 3-point shooting and instead total more points in the paint than any team save the Chicago Sky. The Liberty grade out as a pretty good paint defense team on average, but matchup wise it seems unlikely they’ll fair well on the interior against the size and skill of Sparks.

With both teams capable of making the other uncomfortable on the defensive end, a high-scoring game seems in the offing.

With Kristi Toliver out and Lexie Brown’s status uncertain, the Sparks might find themselves with two of their three highest volume 3-point shooters sidelined for their matchup with the Liberty (three of their four counting Rae Burrell, out of action since almost two weeks ago).

That leaves an already shooting starved team utterly bereft of perimeter offense, and against a team like New York that runs up the score from outside, that could spell serious trouble.

The Liberty by comparison can put shooters at all five positions, which is still something of a rarity for a WNBA team. What pushes their five-out system to the next level though, aside from the transcendent play of Sabrina Ionescu, is the presence of second-year player Han Xu.

At 6-foot-9, Xu is one of the most efficient players in the WNBA, shooting 48.3% from beyond the arc. Because of her immense height, almost no opposing players can challenge her shot, making her the perfect release valve for the Liberty’s drive and kick offense.

It’s incredibly difficult to guard even for the best defensive teams, and the Sparks' 105.2 defensive rating is one of the league's worst.

Did you know that if you parlayed today’s WNBA Sparks vs. Liberty predictions and picks in a single-game parlay, you could win $44.67 on a $10 bet? 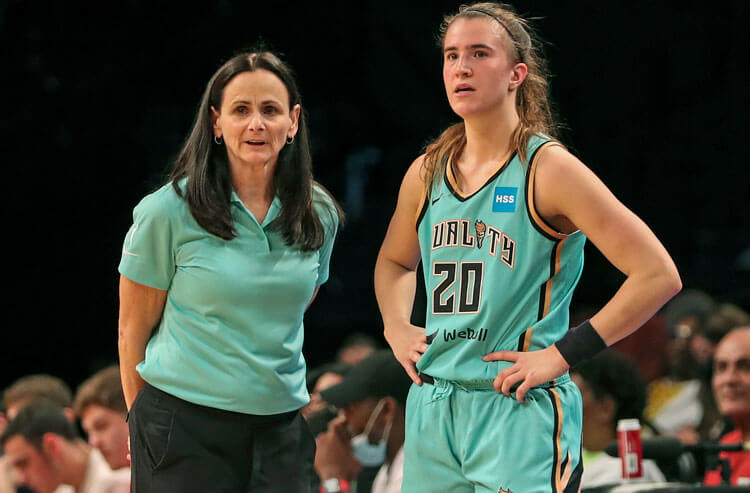