Argentina and the Netherlands are one of the most compelling quarterfinal matchups, with both teams playing attacking soccer. Our World Cup picks are avoiding the risk of extra time and highlighting the goal market. 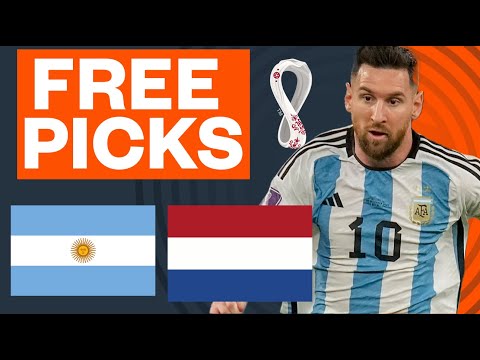 Argentina are three victories away from a fairytale ending to the Lionel Messi era. That quest continues on Friday against a talented Netherlands team, with a place in the World Cup semifinals on the line.

A moment of Messi magic set kicked off a 2-1 win over Australia in the Round of 16, and Lionel Scaloni’s men look like true contenders, bouncing back impressively following a disastrous start in Qatar.

Like Messi, this is surely Louis van Gaal’s last chance to get his hands on the World Cup trophy and the World Cup odds underdogs the Netherlands, who have been somewhat flying under the radar, remain unbeaten after brushing aside the USA on Saturday.

Find out more in our free Netherlands vs. Argentina World Cup picks and predictions for this Friday, December 9 showdown.

Netherlands vs Argentina picks and predictions

Bring on an open, attacking thriller. This quarterfinal is set up to be one of the rare games at this World Cup where both teams come out with attacking intent and look to seize control of possession. No ten-man defensive shells; no long balls to an isolated lone striker.

The Netherlands and Argentina have consistently shown a cutting edge and sharp finishing in Qatar, with depth off the bench to turn the tide. Both teams have scored in every game at the tournament – and both have netted at least two goals in three of their four games.

The attacking quality on show speaks for itself, from Messi and Julian Alvarez to Memphis Depay and Cody Gakpo. That should translate to an end-to-end, high-tempo game, with defenses being stretched at both ends. With three goals each, Messi and Gakpo are on the heels of Golden Boot leader Kylian Mbappe.

Argentina’s attack could also be boosted by the return of the experienced Angel Di Maria, who missed the Round of 16 due to injury and links up so well with Messi when cutting in from the right wing.

In what feels like a coin-flip game, it’s tough to feel great about wagering on either team to win, so I’m leaning more toward both teams to score.

Netherlands vs Argentina side analysis

Argentina is favored to win on Friday, with the Messi factor at the heart of those odds. The 2-1 victory over Australia on Saturday was more comfortable than the scoreline suggests, but the memories of the opening game loss to Saudi Arabia still linger.

As always, Messi carries a heavy burden – even more so here, with World Cup glory starting to come into focus. This is the trophy that would complete a glittering resume, but he can’t do it alone.

The Dutch put down a marker with a classy 3-1 win over the USMNT in the Round of 16, breaking down an American defense that had shut out a free-scoring England attack in the group stage.

An illness struck van Gaal’s squad prior to that win – but there should be no lingering effects here. With Depay fully fit and in scoring form, the Oranje have all the ingredients to grind out a win – and the experience of Virgil van Dijk and Daley Blind should elevate younger teammates.

I’ll be especially watching the midfield battle between Frenkie de Jong and Rodrigo De Paul. When either playmaker gets a stranglehold on a game, it generally means good things for his team.

While I don’t expect either team to be reckless with so much at stake, both teams are at their best on the front foot, pushing forward and getting the ball to their front three. The collective attacking firepower makes the Over a tempting option.

The Albiceleste defense has admittedly tightened up after the struggles against Saudi Arabia, recording back-to-back clean sheets against Mexico and Poland in the group stage. But don’t overthink that – Scaloni’s men were helped by facing opponents who were content to camp in their own half. The Netherlands’ game plan should be very different.

That’s where Denzel Dumfries stands out as a real X-factor for the Oranje and perhaps their best reason to like the Over. He scored the third goal against the U.S. and assisted on the first two. The Inter Milan man’s raids down the right wing give the Netherlands another dimension and his battle with Marcos Acuña could be decisive.

These two teams met in the 2014 World Cup semifinal and served up a 0-0 draw (with Argentina progressing on penalties). A repeat of that kind of stalemate in Qatar would be a real surprise.