Canada secured a spot in Qatar to end a 36-year wait for qualification, doing so in an impressive fashion. The Canadians are headed toward a tough group — find out how we expect them to do as we break down their roster and World Cup odds.

Canada not only achieved their goal of returning to the World Cup for the first time since 1986 but did it in style, finishing on top of CONCACAF qualifying and going unbeaten until the final game.

The Canadians' reward for such an impressive qualifying campaign? A World Cup draw that put them in a group competitive top-to-bottom, with Belgium, Croatia, and Morocco rounding out Group F.

Yet, despite Canada's 36-year wait for qualification and a tough draw, they aren't going to Qatar to round out the numbers — progression to the knockout stage is a genuine expectation.

How realistic is that expectation? We unpack that question below, as we break down Canada's roster and World Cup odds.

Alphonso Davies may be the biggest name on Canada's roster and Cyle Larin may be the highest-scoring Canadian man of all time, but if Canada are to march deep enough in the World Cup to have a player challenge for the Golden Boot, oddsmakers tab Jonathan David as an equally likely player to do so.

The 22-year-old forward currently plays in Ligue 1 with Lille and he has 22 goals in 34 matches for the Canadian national team.

Canada's odds to win the World Cup over time

Canada's attack is where their most talent is, and it's game-breaking ability all the way across the front line.

Alphonso Davies, the best male soccer player in Canada's history despite just turning 22, is where it all starts. The Bayern Munich left-back will play on the left side of attack but gives manager John Herdman the flexibility to play him anywhere in the front four, or further back.

He's Canada's best player, their talisman, and the player who can win them a game single-handedly in Qatar. An October injury scare is already in the past, with Davies back in action for Bayern before the World Cup break.

On the other flank will be the breakout star of 2021 for Canada, Tajon Buchanan. The winger earned a move to Club Brugge in Belgium after a superb 2021 with the New England Revolution and the national team. Quite luckily for Canada, Buchanan has gotten minutes both as a wide attacker and as a wing-back — both roles he fills for Canada — since joining Club Brugge.

Buchanan's direct player is an excellent complement to Davies and will give Canada a threatening outlet in matches in which they're overmatched and playing on the counter.

Davies and Buchanan will play on either side of a front two of Cyle Larin and Jonathan David, after countless debates around the pair's ability to play together — a debate thankfully put to bed in 2022.

Larin was arguably Canada's best player in 2021, scoring 14 times in 13 games, and he's added another three in '22 to become their record goalscorer. Though Larin has started slowly with Club Brugge, who he joined in the summer, he and Buchanan did secure progression to the Champions League knockout stages.

David, the program's other ascending star alongside Davies, isn't far behind Larin on Canada's all-time goalscoring chart. Crucially, after a frustrating end to last domestic season, David is in excellent form for an attacking Lille side, with nine goals and three assists, sitting behind just Neymar and Kylian Mbappe in the goalscoring charts.

Like Davies, David's versatility — he can play out wide, as a No. 9, or as a second striker — will provide Herdman with tactical flexibility.

Rounding out Canada's forward group is Ike Ugbo, who debuted for the national team last year, and Junior Hoilett, a veteran of the football league.

Ugbo, the former Chelsea youth player enjoyed a strong loan spell in the second half of last season, scoring five times for Troyes in Ligue 1, and can provide physicality up top as a substitute. Hoilett is a creative option capable of playing on either flank or through the middle as an attacking midfielder.

With Herdman committed to four forwards, Canada will rely on a two-man midfield, though just one name is a certainty.

Stephen Eustaquio is just as valuable to Canada as Davies or David, has staked a claim as CONCACAF's best central midfielder, and got valuable Champions League experience ahead of the World Cup with Porto — who he helped advance to the knockout stages.

Who partners Eustaquio remains to be seen, due to some unwanted dramatics. The legendary and ageless Atiba Hutchinson, who's still an overwhelmingly calm and secure presence in midfield at 39, has been fighting with a troublesome bone injury. Starting in Qatar is surely out of the question but Hutchinson's place in the squad, alone, is so valuable.

With Hutchinson's availability in question, there are two prominent members of the squad who will play roles.

Mark-Anthony Kaye is the most like-for-like replacement for either Eustaquio or Hutchinson, as a steady box-to-box midfielder who is secure in possession. Out of contract in MLS this winter, Kaye is looking for a move abroad and the World Cup could be a great stage to earn that move.

Then there's Jonathan Osorio, a reliable veteran for TFC and the national team. Osorio is certainly a more attack-minded midfielder than Eustaquio, Hutchinson, or Kaye, and drives the ball forward from midfield with far more regularity.

Osorio will no doubt get chances off the bench in Qatar and has made a habit of scoring in big moments, most notably for Canada in their famous draw away to Mexico last fall.

Canada's defense is a mixed bag, with certainty on the flanks and a lack thereof in the center.

Whether they play a four- or five-man backline, the left side will be owned by Sam Adekugbe, another breakout star of qualifying for Canada and a regular starter in the Turkish Super Lig.

The right side will be manned by either Alistair Johnston or Richie Laryea, both of whom were reliable throughout qualifying. Should they play a back-five, Johnston would tuck into right center-back, with Laryea operating on the flank.

Canada will need strong play from their fullbacks, because their CBs leave a lot to be desired.

Steven Vitoria, 35, has been reliable in a Canada shirt but is increasingly a bit-part player for both club and country, making just 16 starts in each of the last three seasons for Moreirense of Portugal's Primeira Liga.

Vitoria's partner will be Kamal Miller, who has developed into a reliable ball-playing CB more than capable of driving forward in possession. He is, however, fairly untested against high-level competition, with the majority of his pro experience coming for middling Orlando and Montreal teams in MLS.

While there are questions at center-back, there are no such questions between the sticks. Milan Borjan, a veteran of nearly 300 games in European leagues and the Champions League, was fantastic for Canada throughout qualifying and will retain his place in Qatar.

Should Borjan miss time for any reason, Canada can turn to Maxime Crepeau, who has been one of MLS's best 'keepers for several years.

Tactical flexibility is absolutely key to progressing in tournaments, and Herdman proved throughout qualifying that he has built Canada into a flexible team capable of setting up to reflect their opponent. That flexibility — and experience playing different ways — will help Canada get out of Group F.

With game-breaking speed and direct play from Davies and Buchanan, pinpoint passing from Eustaquio, and world-class finishing from David, Canada thrives on the counter. They'll set up to defend deep, absorb pressure, and strike on the break against Belgium and Croatia, and they couldn't have asked for more ideal big teams to do so against.

Both of Group F's heavyweights will take aging squads to Qatar and will be susceptible on the break, and both have had underwhelming moments in recent tournaments.

Croatia were incredibly average at the Euros in 2021, escaping a mediocre group, while Belgium's golden generation continued its legacy of underperforming, with quarterfinal exits in Russia 2018 and the Euros.

A draw from one of the first two games, likely Croatia in matchday two, would put Canada in a good position to advance with a win against Morocco in the third matchday — with Croatia having to face Belgium at the same time.

Morocco (32nd in Elo rankings), like Canada (29th), are a young and high-flying side but flamed out terribly in '18 and most recently were pushed to the brink by Malawi at AFCON before getting knocked out by Egypt. They won't be an easy out but the experience Canada got in possession and breaking down lesser teams in CONCACAF will help them to victory.

It will be a nervous group stage from start to finish, but Canada have the talent and tactical nous to successfully navigate their way to the knockout stages.

Canada will face Belgium, Croatia, and Morocco in Group F of the 2022 World Cup. 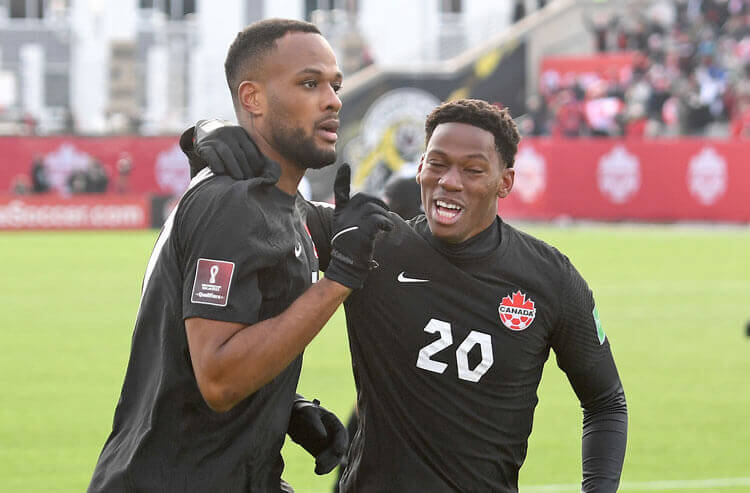 Canada's World Cup Odds, Schedule, and Betting Preview: Not Just Making Up the Numbers
Provided by