Lionel Messi and Kylian Mbappe will meet in the World Cup final, and they'll do so level in the Golden Boot race on five goals apiece. Find out how the two attackers stack up in our Golden Boot odds.

Lionel Messi slotted home a penalty in the semifinal to draw level with Kylian Mbappe in the Golden Boot race — and after Mbappe failed to add to his tally in France's semifinal victory, it's Messi favored to win the honor in World Cup odds.

Looking to bet on some 2022 World Cup action? Here are two of the best bonuses* available:

Entering the final, Lionel Messi and Kylian Mbappe are deadlocked with five goals apiece in the tournament, which brings tiebreaker scenarios into play. There are two tiebreakers in case neither player scores or if they each score one — or if either Julian Alvarez or Olivier Giroud can match them.

The first will be total assists. Messi has tallied three while Mbappe has two, giving the Argentinian the edge should Mbappe fail to score or grab an assist. The other tiebreaker is fewest minutes played, which is where the Frenchman is far and away in the lead. Mbappe has played 477 minutes in the tournament while Messi has played 570.

Lionel Messi made it three goals in three knockout games, and five overall, as Argentina beat Croatia 3-0 to advance to the World Cup final. With Mbappe going scoreless for a second game in succession, Messi took over as the betting favorite.

Mbappe scored his second brace of the tournament in the Round of 16 win over Poland but he's been held out since, unable to score against either England or Morocco — though he has remained at the heart of France's attack.

The beloved all-time scorer for France is on four goals, last scoring the winner against England. The No. 9 does the thankless work for France's attack, pops up with stellar goals every now and then, and delivers when needed.

Alvarez stole the show in Argentina's semifinal, scoring twice including a brilliant individual effort in their 3-0 win over Croatia. Alvarez's brace drew him level with Giroud, one goal behind the leaders.

France's Kylian Mbappe is the favorite at -125.

The Argentine superstar has +150 odds to win the Golden Boot. 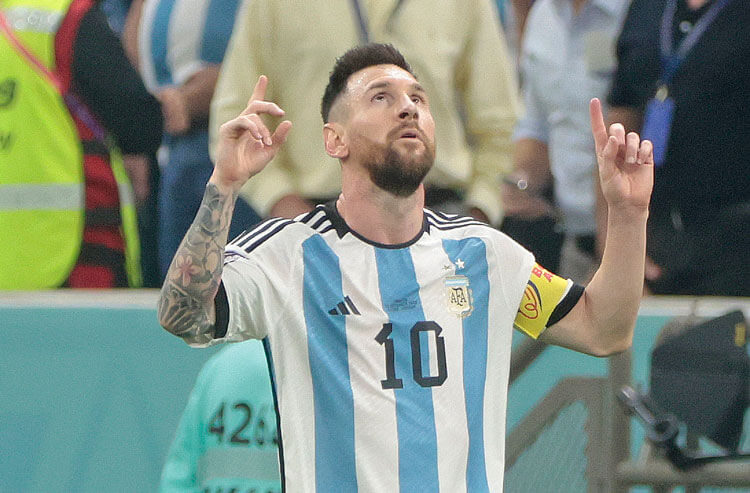