The 2022 World Cup saw France dethroned in the final. With 2026 World Cup odds on the board as we look ahead, Kylian Mbappe & Co. are favored to wrestle back the crown they earned in '18.

The 2022 World Cup ended with a final for the ages, as Lionel Messi earned the crowning achievement in a flawless career.

While Kylian Mbappe and France left the pitch in Qatar as runners-up, early odds to win the World Cup in 2026 suggest Les Bleus won't be down for long. The two-time champions are favored to take back the title in '26, with a few world heavyweights close behind.

With the page turned from the '22 tournament, check out the 2026 World Cup odds below.

Looking to bet on some World Cup action? Here are two of the best bonuses* available:

France came up short of defending their World Cup title but they're favored to wrestle it back in 2026. Kylian Mbappe leads a deep, young French core that is sure to bleed through even more elite talent between now and '26.

Neymar or no Neymar, Brazil are expected to contend again in three-and-a-half years, and rightfully so. From Viniscius Jr. in attack, to Bruno Guimaraes in midfield, and Eder Militao in defense, Brazil have young, elite talent at every area of the pitch.

Like France, England have an elite young core with more talent to be cycled in between now and the '26 tournament. There's sure to be plenty of conversation around Harry Kane's status within the team as that time approaches but between Phil Foden, Jude Bellingham, and Bukayo Saka, there's no shortage of world-class talent.

Argentina walked away from arguably the greatest World Cup final ever as victors, led by Lionel Messi's immaculate performance. Messi's sure to be out of the picture come '26 but can the next generation lead them to a repeat?

Spain's exit from Qatar looked an awful lot like previous exits, in which they had very little to show from occasionally dominant play. Pedri and Gavi will make up the spine of Spain's team for years to come but they'll have plenty to round out in the coming years.

Past winners of the FIFA World Cup

How to bet on the World Cup

The unrivaled excitement of the World Cup only comes once every four years, and it brings many first-time bettors to the sport. Learn everything you need to know about how to bet on soccer and the World Cup with our comprehensive guide tackling moneylines, spread, totals, and even Asian handicaps.

Betting on the outright winner of the FIFA World Cup is an extremely popular futures betting option and odds usually come out soon after the previous World Cup winner is crowned. These odds will adjust based on how countries and players perform leading up to the World Cup. Sportsbooks will also adjust the soccer odds based on handle and liability with certain nations.Futures odds are displayed in list form, showing each option and its odds – most often ranked from best chances to win to worst. You will usually see a plus (+) sign in front of a team's futures odds, like this:

This means that on a $100 bet, you would stand to win $500 if France won the World Cup. As we get closer to the World Cup final or if one team has been extremely dominant, you might see a country with a minus sign (-) ahead of its odds.

This would mean that you have to bet $110 to win $100 on a Brazil World Cup victory. Above we have posted the American odds for the FIFA World Cup. However, these are easy to convert to decimal odds or fractional odds with our odds converter tool.

• A host country has won the World Cup five times.

• There has only been one back-to-back World Cup winning nation in history. Brazil accomplished the feat in 1958 and 1962.

• No African or North American nation has ever played in a World Cup final.

• Prior to 2022, the World Cup had been won by a European nation in the previous four tournaments.

Brazil have won the most World Cups, with five, while Italy and Germany follow with four wins each. 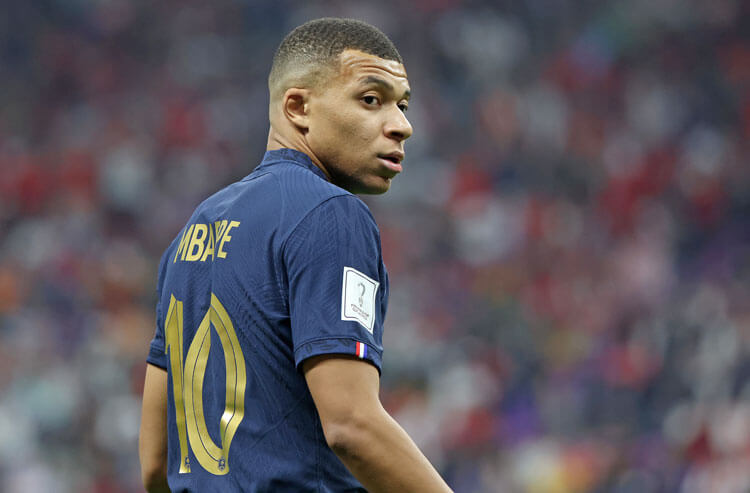