Public bettors clearly aren't putting much faith in the Falcons, and frankly, we don't have much reason to disagree. Find out why WFT can start to get its season back on track as we break down our Washington vs Falcons picks for Week 4.

Things haven’t gone quite as we expected for the Washington Football Team after a promising end to last season as they exited the playoffs to the eventual Super Bowl champions, the Buccaneers.

Both WFT and the Atlanta Falcons both come into this game 1-2, with Matt Ryan’s team breaking their winless start with victory over the Giants last week.

If you’re betting this game on Sunday, October 3rd, then make sure you read our NFL picks and predictions for the Washington Football Team vs. Atlanta Falcons first.

When the line opened it had the Falcons as favorites. The market reacted quickly, taking them from 1-point favorites to 1.5 point underdogs. Such is the public’s belief in this team. The total points line has also changed since opening, dropping from 49 to 48 points.

Falcons are 0-4 ATS in their past four games in Week 4. Find more NFL betting trends for Washington vs. Falcons.

The Falcons finally got their first W last week, as they narrowly beat the Giants in a battle of the winless teams.

It was a low-scoring game and not many bettors would have cashed on the Falcons’ two touchdowns being scored by Olamide Zaccheaus and Lee Smith. Kyle Pitts only managed two receptions, and even Calvin Ridley, the Falcons’ best offensive weapon, only managed 61 yards despite leading the team in receptions.

We can’t let that win against a very poor Giants team cloud our judgement of the Falcons. Only two teams have put up fewer points than them, the abysmal Dolphins and Bears. Between those two, Miami has injuries and the Bears have Matt Nagy — we really would expect far more from an offense with Matt Ryan, Ridley and Pitts.

The Washington Football Team haven’t yet performed at the level that we saw from them down the stretch last year where it begun to look like they’d be challengers as early as this season. They have excuses though, with Ryan Fitzpatrick on IR and free-agent signing Curtis Samuel injured in training camp.

Washington’s defense also hasn’t quite lived up to the lofty expectations that were set before the season but, on paper at least, it’s still one of the best in the league and their pass rushing attack will put serious pressure on Ryan. Statistically, they’ve struggled, but with quality on their roster, you’d expect to see that turn soon.

The line moved from Falcons being 1-point favorites to the WFT being 1.5 point favorites and I’d imagine that we could see this continue to swing to Washington as kick-off gets closer. Take that 1.5 point hit and back the Football Team now.

Put on your balaclava and get ready to jump into the getaway van because this points total looks like an absolute steal. We’ll be smashing the Under here because it’s just too easy of a play.

The Falcons sit dead last in terms of offensive DVOA and the Football Team are middle of the pack in 20th. Through three games, Washington has put up an average of 22.3 points per game on offense, a low number, but one which is far superior than the Falcons’ lowly 16 points per game. This obviously isn’t an exact science, but from what we’ve seen from these teams, it feels highly unlikely that this game will be scoring-heavy.

The trends also direct us straight to the Under, which is 4-0 in Washington’s last four games as a road favorite and 10-2 in their past 12 games on grass. Not only that, but the Under is 6-1 in the Falcons’ past seven games as a home underdog.

Both teams’ scoring this season points us toward the Under, the line is moving toward the Under and the trends point to the Under. Sometimes you just need to do the obvious thing.

We all expected Mike Davis to dominate this Falcons backfield this season, but Cordarrelle Patterson has had other ideas. Not only has the hybrid star taken carries off Davis but he’s also begun to own the Falcons’ passing game.

Over the past two weeks, we’ve seen Patterson get targeted seven times in each game, hauling in five and sic catches respectively. Against the Giants, he managed to turn his six receptions into 82 yards, averaging 13.7 yards per catch.

Patterson has quickly become a key part of how this Falcons offense operates and a line of 3.5 on total receptions looks very low, especially when Washington gave up significant yardage to Zack Moss when he was used in the passing game last week.

Take the Over here. 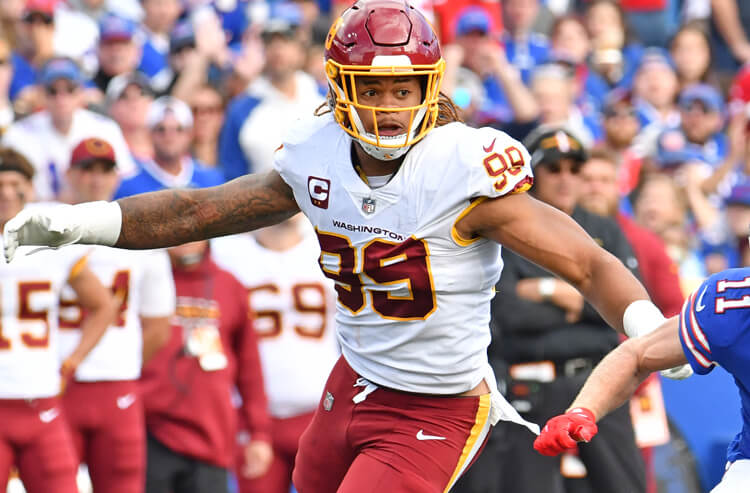 Washington vs Falcons Week 4 Picks and Predictions: ATL Fails to Soar
Provided by