The NFL's international schedule gets underway in Week 4 with the Vikings and Saints meeting in London. With no shortage of injuries to watch, our prop picks focus on a trio of players who will be impacted by Andy Dalton's start.

The NFL's international schedule gets underway Sunday at Tottenham Hotspur Stadium, with the Minnesota Vikings and New Orleans Saints meeting in London in Week 4.

Minnesota is 2-1 but not without questions, as it is coming off a comeback win over the Lions in which superstar Justin Jefferson was bizarrely muted. New Orleans has questions of its own, such as who is going to be under center on Sunday.

Our NFL player prop picks for the Vikings vs. Saints highlight a trio of players who will be impacted by Andy Dalton's looming start.

Red Rifle and an AK

Despite averaging 5.1 catches per game through the first five years of his career, Alvin Kamara's production as a pass catcher was widely expected to drop considerably in 2022.

Jameis Winston, back from a torn ACL, has never been one to throw to running backs. Charles Sims, briefly one of the NFL's best receiving backs, had the most receptions a back has had playing with Winston, with 51 in the QB's rookie season.

A pesky rib injury hasn't helped but so far it's played out as expected in New Orleans, with Kamara posting two- and three-catch days in two games. With Winston doubtful, Andy Dalton is under center and ready to pepper the Saints' best skill position player.

In Cincinnati, Dalton made regular use of Gio Bernard, despite the back's part-time role. From 2013, Bernard's rookie season, to 2019, Dalton's last with the Bengals, Bernard averaged 2.97 catches per game despite never playing more than 60% of the offense's snaps in a single season.

Winston and Dalton are wildly different quarterbacks who operate in different parts of the field. While Winston's inclined to push the ball downfield and fit it into tight windows, Dalton wants to rapidly go through his progressions and get the ball out.

That is great news for a running back in Kamara who has been massively underutilized in the young season. He may be limited by a rib injury still but even not playing a full snap count, one of the NFL's best weapons will go Over 3.5 catches.

Not a lot to Olave

It was tough to find a more ready-made fit after the draft than Chris Olave to the Saints. At Ohio State, Olave largely operated on the perimeter, working on the boundary and vertically. There are no two places Winston loves to throw to more, and so it was a match made in heaven.

While the results have been hit-and-miss through three weeks, the theory there has absolutely played out in practice. Olave's stressing defenses vertically, and Winston has been targeting him repeatedly.

Chris Olave has led the league in air yards in back-to-back weeks. He has 603 over this span. Only one other player over 400 this season.

Has 13 targets and 80-plus yards in back-to-back games.

Unfortunately, after a career day in Week 3, Olave finds himself in considerably less ideal circumstances with Dalton under center. Olave's route tree hasn't exactly expanded in the pros, with the large majority of his work still coming on the perimeter and deep. Dalton, in contrast to Winston, is a passer who targets the short and intermediate areas, and the middle of the field, relentlessly.

Since 2018, Dalton's average intended air yards is 7.35 on a per-attempt basis. Winston, on the other hand, has averaged 10.2 air yards per attempt over his last four years as a starter (including 2022). That is pretty much the difference between the highest average air yards attempted and the lowest, season over season.

On Sunday, the difference in passers will be the difference between Olave's fantastic start continuing and hitting a minor bump. With Dalton set to start, take the Under on Olave's yards total.

With Michael Thomas out, Jarvis Landry questionable, and Olave less reliable with Dalton under center, the Saints are going to need a tertiary piece to step up on Sunday. Enter tight end Juwan Johnson.

Though Johnson's had a modest start to the season, with six catches for 83 yards — a line that looked a lot better before zeros in Week 3 — there are some promising underlying metrics. Before a 49% route participation last week, Johnson had run a route on 70% of the Saints' dropbacks and earned 12 targets over two games.

Taking away that hideous showing by the Saints in Week 3, in which Winston's back injury quite clearly sabotaged the offense, Johnson has a solid role in this offense — and that same offense will be down two of its Top 3 receivers against the Vikings.

With a receiving yards line at just 20.5, Johnson doesn't need much at all to go Over. A route participation rate around 70% and six targets, both well within the realm of possibly and even more so with New Orleans' injuries, is really all we will need.

I will happily take the Over here and count on Johnson's role sustaining in unideal circumstances for the Saints. Not for nothing, Minnesota's in the Top 10 in both yards and receptions allowed to tight ends this year. 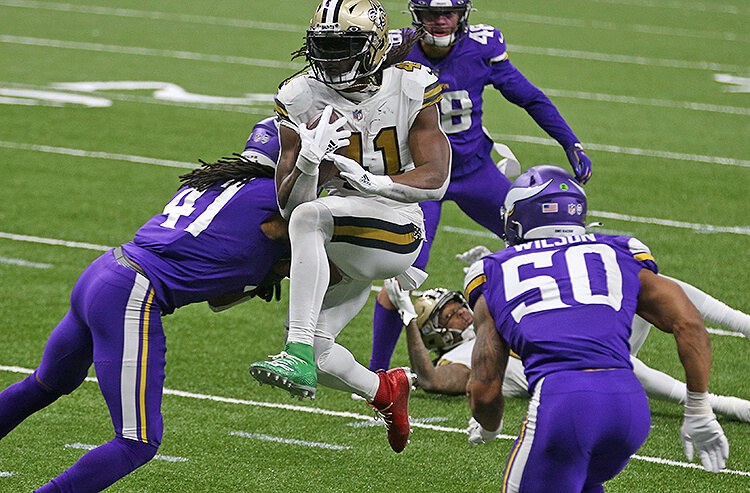