NFL Wild Card Bet Now, Bet Later: Take the Under in Dallas, Back the Bucs ASAP

Early betting lines are dropping for the NFL's Wild Card Weekend. Jason Logan likes taking the Under in the 49ers-Cowboys matchup and is backing Tom Brady and the Bucs as 7-point favorites as soon as possible in his latest edition of Bet Now, Bet Later. 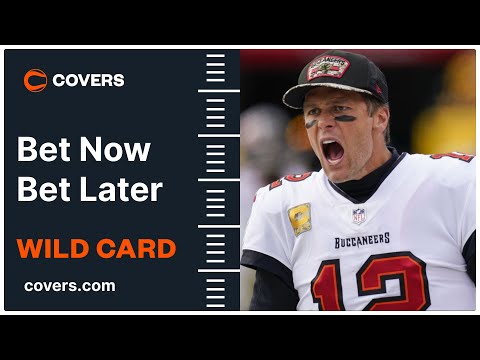 After 18 weeks of regular-season competition, we have NFL Wild Card Round odds in front of us. Those are moving fast as bettors break down the postseason matchups to find those angles and edges.

The plan is the same in the playoffs: get the best number for our opinion. That means betting some NFL playoffs spreads and totals now, and waiting for others to move before getting action down later.

Here are my top Bet Now/Bet Later lines for the NFL Wild Card Round.

FanDuel was one of the first through the door and hung the defending Super Bowl champs as touchdown favorites at home. The Bucs were 7-point chalk in Philadelphia back in Week 6 and won 28-22 on a Thursday night – a game that wasn’t as close as the final score would lead you to believe, with Philly pulling out the backdoor cover on a last-minute score.

Philadelphia’s RPO-heavy playbook pushes up against one of the top run stop units in the NFL, as the Bucs ranked third-lowest in EPA allowed per rush (-0.217). That could put the postseason weight on Jalen Hurts’ inexperienced arm in what will be the Eagles' first real road game since Week 10. Philadelphia benefited from a super-soft schedule to finish the year, playing four of its last seven at home and only traveling to New Jersey twice and once to DC. Those foreign stands were filled with plenty of green jerseys.

Tom Brady and the Bucs have been around the block and while the offensive depth chart is a little shallow, Brady has done more with less in the postseason. Tampa Bay scored 41 points in the finale with Carolina in Week 18 and has posted 30 or more points in six of its last eight games and finished the season 6-2 against the spread inside the pirate ship.

The Cardinals and Rams finish a trilogy in the Wild Card Round after these NFC West rivals split their two previous matchups. Los Angeles drew the freshest blood with a 30-23 victory at Arizona in Week 14, winning outright as a 3-point underdog on Monday Night Football.

This postseason point spread opened L.A. -3 and quickly jumped to -3.5 in the minutes after hitting the board. I pegged this line higher in my projected spreads, thinking more Rams in the -5.5 range. The Cardinals are coming off a loss to Seattle in Week 18 and have only one win in their last five contests.

That said, if you do like Kyler Murray & Co. to keep this one close, you may want to push the pause button and see if this spread climbs higher. Offshore books opened Los Angeles -4.5 and other mainstream operators are already up to Rams -4.

The Cardinals have been one of the better road wagers in football, going 8-1 ATS as visitors, including a 37-20 win in SoFi Stadium as 3.5-point dogs way back in Week 4. If you like Arizona, bet this one later.

The total for this Wild Card contest opened as high as 51 points at mainstream operators while prominent online bookies posted the number at 48 points. This sucker is going down, so grab as many points as you can with the Under now.

San Francisco deploys a methodical offensive attack, keeping everything between the hash marks with a relentless run game and short passes with plenty of YAC. On the other side of the ball, the 49ers have been the premier defense in the NFL since Week 10, owning an EPA allowed per play of just -0.379 in that span (lowest in the league), and are easily the toughest stop unit the Cowboys have faced in a long time.

Dallas’ offense has been inconsistent with its output despite all those playmakers. The Cowboys hung scores of 56 and 51 points in two of their last three games (versus a gassed WFT the short-handed Eagles playing for nothing) but mustered only 22 points in a loss to Arizona and have struggled to move the chains on third downs. The Cowboys stop unit is the real star of the show, ranked among the best in DVOA and allowing just 21 points per game on the season.

This number is starting to slim from 51 to 50.5 and could end up sub-50 by Monday morning, so if you aren’t banking on many points between these classic NFC rivals, bet the Under now.

Round 3 of this AFC East rivalry sees its total once again pegged at 43.5 points. That’s the same closing number from their Week 16 encounter in Foxborough, with Buffalo winning that one 33-21 (Over/Under opened 44.5). The total for their now-infamous Week 13 wind-plagued Monday night battle in Orchard Park opened at 45 points before the weather reports became clearer and those girthy gusts trimmed the total to as low as 39.5 on gameday.

Some online shops are down to 43 points while other books are tagging Under 43.5 with a little extra juice. This will be the third look at each other and both defenses have plenty of tape to sort through before Saturday night’s Wild Card contest. As well, the extended forecast for Orchard Park is calling for Arctic-like temperatures, with a “feels like” range around 3 degrees.

However, the Bills offense has been rolling since that embarrassing loss to New England at home in Week 13, ranking No. 6 in EPA per play over those five games while scoring 27 points or more in each of those contests (3-2 O/U). The Patriots' once-mighty defense showed cracks toward the end of the schedule, going from a league-low 15.4 points against per game in the first 13 contests to giving up almost 26 an outing in the final four games (+0.321 EPA allowed per play – 32nd in that stretch).

If you think there are plenty of points packed into this AFC Wild Card clash, wait it out and see if that subtle slide to the Under snowballs into a move below 43.5/43 points later in the week before buying back the Over.

NFL Wild Card Bet Now, Bet Later: Take the Under in Dallas, Back the Bucs ASAP
Provided by