Monday Night Football is in the Big Easy this week, and Lamar Jackson will need to be at his best with many key players injured on Baltimore's offense. Read more to see why the star quarterback headlines our Ravens vs. Saints prop bets. 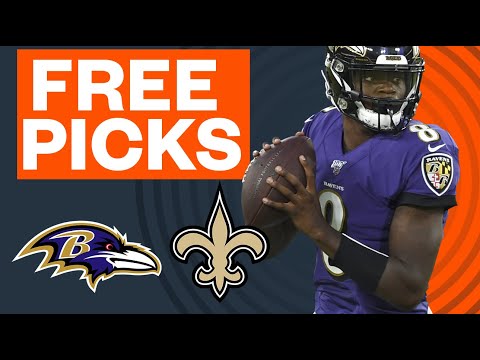 The Baltimore Ravens come into their Week 9 Monday night prime-time battle with the New Orleans Saints as 2.5-point favorites but will likely be missing the majority of their skilled offensive players.

Lamar Jackson will have to be creative this week and might have to rely on his rookie tight end in the passing game with a litany of injuries.

Check out my best NFL picks for Monday Night Football’s Week 9 matchup between the Ravens and Saints.

A) Opt-in at DraftKings and get a 15% profit boost on any MNF same-game parlay! Opt-in Now

I'll do it myself

This is not a great matchup for the Baltimore offense. The Saints rank No. 1 in EPA vs. the rush, and with running back Gus Edwards and tight end Mark Andrews both questionable, there are not a lot of things the Saints’ defense has to worry about other than Lamar Jackson.

With a lack of pass-catching talent, Jackson might have to take a me-first approach on the indoor track of the Caesars Superdome.

The Saints have seen two mobile quarterbacks this season (Kyler Murray and Marcus Mariota) and the pair combined for 102 rushing yards on 19 carries and a score. Joe Burrow also had a rushing TD vs. NOLA in Week 6.

Over his career, Jackson is also averaging 77.8 rushing yards per game when playing under a roof. This team was already lacking pass-catching talent, and the loss of both wideout Rashod Bateman and possibly Andrews is massive. The run game is also in trouble with personnel and having to face the Saints’ rush defense.

Jackson will have to do more than usual, and that could mean creating on the ground due to an inexperienced receiver corps — especially when the yards get tough inside the 20. Jackson is averaging 6.89 designed rushes per game at 7.21 yards per carry and will be the team’s best runner come Monday.

At +165 to score a TD (which is longer than three of his last five games), I’m betting on the best talent to find paydirt for the Ravens.

Since returning in Week 5, Alvin Kamara has received six, nine, nine, and 10 targets in consecutive weeks. The running back has turned that into 28 catches for 278 yards. His receiving yard total opened at 36.5 yards, which is a season-high but just one yard longer than his Week 7 total.

Thanks to the aging arm of Andy Dalton, that’s an impressive 25.6% target share for Kamara. With the game script and an indoor environment in his favor, Kamara should see another big role in the passing game on Monday night.

Jarvis Landry is questionable (yet again), but Dalton hasn’t been looking to go deep downfield with a 3.6 average depth of target (aDOT) over the last four games. With the Saints just one game out of the division lead, another conservative game plan could be in store for New Orleans. That means Andy Dalton will continue to pepper his No. 1 back with targets.

Only Austin Ekeler is averaging more targets per game on the season than Kamara, and his receiving total closed at 46.5 yards last week.

Mark Andrews exited last week early and rookie tight end Isaiah Likely finished with six grabs for 77 yards and a score on seven targets. Now Andrews is on the wrong side of questionable heading into Monday night after a DNP on Saturday. With the Ravens having a bye next week, Andrews playing is even more improbable.

Thanks to a lack of other skilled pass catchers, Likely could see the majority of Jackson’s targets on Monday night. With a backfield that could feature Kenyan Drake, Baltimore could also be facing longer third downs which would also favor Likely’s receiving props.

This could be the rookie’s coming out party as he caught 59 balls last year with a pass-first Coastal Carolina offense.