Cam Akers has returned from the wilderness as the Rams' clear RB1 but has a tough matchup on TNF against a revitalized Raiders defense. Our NFL betting picks break down Akers' rushing total for Las Vegas vs. Los Angeles. 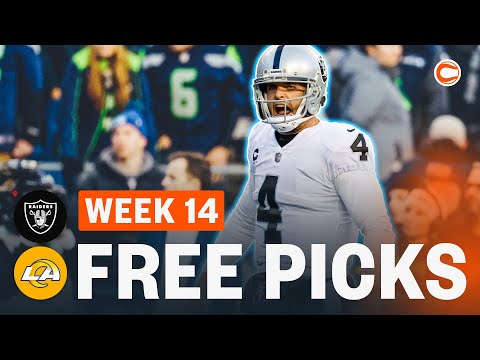 Many sports bettors know the long and lonely stretch of highway between Sin City and Southern California, which sets up the first non-conference “Battle of I-15” when the Las Vegas Raiders visit the Los Angeles Rams on Thursday Night Football.

The Raiders bring a three-game winning streak with them to SoFi Stadium, which will feature plenty of Silver and Black in the stands, going back to the franchise’s time in L.A.

Los Angeles is trying to tread water on a broken season but made waves by picking up castoff quarterback Baker Mayfield, who has a chance to play with Matthew Stafford out and backup John Wolford injured.

I try to make sense of the point spread and Over/Under total for Thursday Night Football and give my best NFL picks and predictions for Raiders at Rams on December 8.

Also, be sure to check out Josh Inglis' full TNF player prop picks.

Raiders vs Rams picks and predictions

A short week can leave even the best teams in chaos. When it comes to clubs like the L.A. Rams, a Thursday night date is downright banana balls.

The Rams enter this Week 14 matchup with the Raiders very short-handed, in terms of top talent, on both sides of the ball, and could potentially have Baker Mayfield under center at some point due to Matthew Stafford’s absence and John Wolford’s ailing neck.

No matter if its Wolford, Mayfield or Bryce Perkins under center, Los Angeles will continue to lean into its running game.

Before Stafford was lost to injury, Sean McVay’s playbook was handing off on only 36.35% of snaps — fourth lowest in the league — for an average of just 22.1 rush attempts per contest (fewest in the NFL). That workload has shot up the past three games, with Los Angeles handing off on 50.56% of snaps for carry counts of 33, 28, and 30.

That uptick in rushing attempts has benefited one-time castoff RB Cam Akers, who’s coming off a season-high 17 carries in Week 13. Akers picked up 60 yards and two touchdowns from those handoffs and played 72% of snaps — a sudden increase in action after working as RB2 behind Kyren Williams since his return to the lineup.

That effort prompted oddsmakers to set Akers’ rushing yards total at 45.5 for Thursday night — a tempting Over considering his increase in carries and the fact Akers has gone for totals of 61 and 60 yards in two of his last three contests.

However, there are multiple factors working against Akers entering this short week that have me betting the Under 45.5 yards, as I believe this Over/Under is a bit of an overreaction to Sunday’s showing.

Overall, Akers is rushing for a little over four yards per carry in the past three games and runs behind the worst offensive line, in terms of Football Outsiders’ adjusted line yards. Las Vegas does a good job slowing down the run, ranked out No. 7 in EPA allowed per handoff and checking rival rushing games to just 3.2 yards per carry during its winning streak.

Akers is now not only sharing touches with Williams but also WRs Brandon Powell and Tutu Atwell, who combined for 68 yards on seven attempts in Week 13. His carries could also diminish if Perkins gets the nod over an injured Wofford, as he’s run for 92 yards on 18 attempts in his limited work this season, including nine runs for 44 yards versus Kansas City.

Game script would also work against running the ball, considering Las Vegas is a 6-point favorite and likely forcing L.A. to play from behind and pass more, even with McVay being relentless with the run despite falling behind against the Chiefs and Saints.

The Raiders’ ability to run with Josh Jacobs and dominate possession (31:11 TOP last three games) with a methodical pace (22nd in secs per play) doesn’t leave Los Angeles much time with the football and leaves fewer opportunities for Akers to go Over his rushing yards total.

On any TNF bet for tonight!

A) Opt-In to get a 100% profit boost on any TNF bet tonight at DraftKings! Opt-In Now

This point spread hit the board as low as Las Vegas -5.5 on Sunday night and quickly marched as high as -6.5 on Tuesday. While some respected shops are on the high end with the road team, the market consensus is Raiders -6.

Las Vegas is on a three-game run and coming off a solid two-way performance against the L.A. Chargers on Sunday. The Raiders’ defense continues to spark this turnaround, most notably the pass rush, while the offense put up 404 yards in Week 13 and is averaging 0.449 points per play during this streak — fifth highest in that span.

The Raiders were holding out hope that TE Darren Waller and WR Hunter Renfrow would be able to return off the IR for Week 14, however, it sounds like both of those skill players are still working their way back from injury and will sit out the schedule game on the short week. Should one or both of those players be active, this spread could jump to a touchdown.

Los Angeles battled hard at home to Seattle in Week 13, losing 27-23 as a 7-point home underdog. The Rams are missing their starting QB, all-world WR in Cooper Kupp, and defensive motor in Aaron Donald. The concerns at quarterback are magnified by an offensive line unable to protect the passer and sitting 30th in adjusted sack rate at Football Outsiders.

As for the Mayfield pickup, the acquisition of the much-maligned QB barely made a blip in the betting markets. Los Angeles +6 saw minor shuffling of the vig and you could make the argument that giving Mayfield reps on a short week in this system would actually be detrimental to L.A., considering Wofford and Perkins at least know the playbook.

According to DraftKings, 68% of bet count and 78% of handle is riding on the Raiders in their “home away from home” while Covers Consensus concurs with 63% of picks siding with the Silver and Black.

The Over/Under total for Thursday Night Football hit the board at 43 points and has climbed to 44.5 points as of Tuesday evening.

Las Vegas has put up 27 and 37 points in regulation the past two weeks and sits ninth in EPA per play during their three-game run. The Raiders’ defense has been much more dangerous in terms of pass pressure and takeaways but is still ranked 31st in defense DVOA at Football Outsiders.

The Rams’ offense has been declawed, at least through the air, since losing Stafford and Kupp. However, Wofford showed flashes of brilliance against a Seahawks’ suspect stop unit last weekend and the run game is getting a massive uptick in action, with L.A. going from one of the lightest rushing attacks to a playbook handing off more than 50% of snaps over the last three contests.

As for the Raiders’ offense, it’s leaning into the ground and pound with RB Josh Jacobs. The bruising running back has anchored a methodical Las Vegas playbook that is chewing up clock and controlling possession during the winning streak.

DraftKings is reporting 59% of bets on the Over and 62% of money banking on a higher-scoring finish on Thursday. Las Vegas owns a 6-6 O/U mark this season while L.A. is 5-7 O/U entering Week 14.

Adams is pretty much unstoppable and will find the end zone for the fifth game in six weeks on Thursday, which will help Las Vegas pad a lead and force L.A. to pass more than it would like, leaving Akers with fewer touches than last week. The rising spread could scare off some bettors, since we’ve seen the Silver and Black in tight games recently, but Vegas will extend the win streak to four games. Hence, the moneyline rather than laying the points.

Raiders vs Rams Thursday Night Football Picks and Predictions: Akers Bottled Up by Silver and Black
Provided by