Patriots vs Bills Wild Card Picks and Predictions: Buffalo Cranks Up the Heat

There's been constant chatter around the cold weather in Buffalo ahead of this one, but let's not give it too much weight. We explain why the Bills will overcome the frigid temperatures and the Patriots in our Wild Card betting picks. 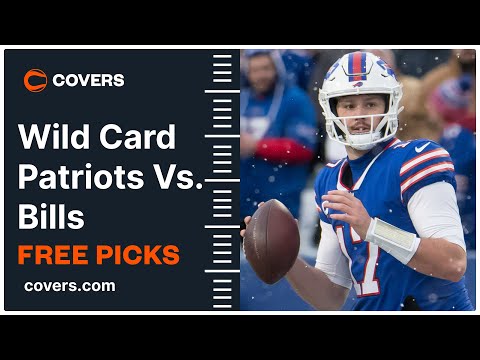 A rivalry so nice, they’ve got to play it thrice.

The New England Patriots and Buffalo Bills get a rubber match in the AFC Wild Card Round after these divisional foes split their regular-season series – thanks in part to the wild winds of Orchard Park in Week 13, which helped New England grind out a 14-10 win. The Bills returned serve with an impressive 33-21 victory in Foxborough 20 days later.

A grudge match this bitter calls for a complementary climate with temperatures feeling like -4 degrees in Buffalo Saturday night.

Here are our free NFL betting picks and predictions for Patriots at Bills on January 15.

Buffalo opened between -4 and -4.5 on Sunday night once AFC Wild Card Round matchups were set and most books have settled on the Bills as 4-point home chalk, however, some books are dealing Buffalo -3.5 flat. This total opened at 43.5 points and has ticked down slightly to 43 points as of Tuesday morning.

Canada: Over 44.5 points + Devin Singletary and Damien Harris to both score a touchdown boosted to +500 at Betway! Claim Now

The Over is 9-4 in the Patriots’ last 13 games overall. Find more NFL betting trends for Patriots vs. Bills.

Patriots vs Bills picks and predictions

The Bills were jacked up on vengeance when they rolled into Gillette Stadium a few weeks back, still stinging from an embarrassing loss to New England at home in Week 13.

In that first meeting, the Patriots decided to pass on passing in those brisk breezes and pushed the Buffalo defense around on the ground at will. In the follow-up game, the Bills came out guns blazing, rolled the dice on fourth down early on, and put the Patriots on their heels, eventually winning 33-21 as a 1-point road underdog.

That will be the plan of attack for the Wild Card Round as well, with the Bills’ potent passing game not running against the wind "Bob Seger style" and perhaps not facing the same stingy defense that got New England to the tournament.

The Patriots stop unit has slipped in the home stretch of the season, exposing the soft gooey middle of the schedule where New England took advantage of some less-than-stellar opposition and strung together seven straight wins.

Ever since that Week 13 win at Buffalo, the Pats defense has allowed nearly 26 points per outing in the final four games and ranks 20th in EPA allowed per play (0.062) in that span, most notably getting picked apart by the pass (allowing a 49.2% success rate per dropback).

If Josh Allen can find that same early-game engine that put the Bills up big in Week 16, New England will once again have to dial down the run calls and put weight on the arm of rookie quarterback Mac Jones – not the best plan of attack considering the history of first-year passers in the NFL Playoffs (rookie QBs just 2-9 SU in playoffs since 2010).

You hate to sell Bill Belichick short in the postseason, but with New England backing into the Wild Card Round - losing three of its last four games - and Buffalo riding a four-game win streak (3-0-1 ATS), we’ll go with the hot team at home in the brutal cold.

I featured this Over/Under in my “Bet Now/Bet Later” lines for the Wild Card Round, telling bettors to put a pin on playing the Over right away as this number was bound to slim later in the week. And we’ve started to see this move, with the total trimming from 43.5 to 42.5 points as of Tuesday morning.

Even with Buffalo dropping 33 points on New England in Foxborough and the Patriots defense showing cracks, this total hit the board way too low and is an even greater gift now that it’s dropped to below 43 points. That brutal cold may make the hits hurt a little more, but the winds are going to be very tame and there’s no rain or snow showing up Saturday night.

Buffalo has scored at least 27 points in five straight games and will do the lion’s share of the scoring Saturday, which means we’re not asking for much from the Patriots offense. New England managed at least 17 points in those final four games – including a 50 burger served to the Jaguars – and that’s all we’ll need to get this final score Over the total.

For some reason, bettors still can’t shake that Week 13 wind-altered result from their heads and with the forecast calling for dangerously cold temperatures on Saturday night, the mind drifts to the Under. But if you look at the totals set for the past two meetings between the Pats and Bills, we see openers in the 45 and 44.5-point range.

The Bills offense wobbled a bit between Week 9 and Week 13 but snapped out of that funk, starting with a near-comeback versus Tampa Bay in Week 14. Since then, this attack sits No. 7 in EPA per play (+0.115) and is getting great production on the ground and through the air.

New England has fallen behind quickly in its past three losses, getting outscored by a combined 35-0 in the first quarter, and the Bills will come out swinging to set the tone for the Over on Saturday night. Buffalo holds a 1Q edge of 31-2 over its previous three outings. 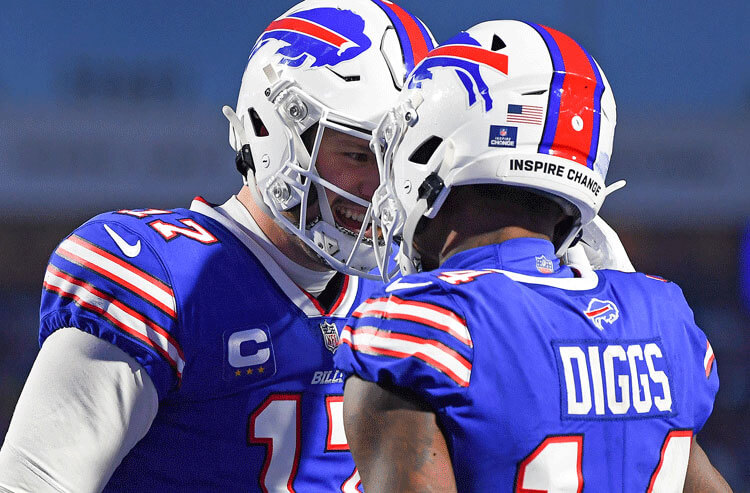 Patriots vs Bills Wild Card Picks and Predictions: Buffalo Cranks Up the Heat
Provided by