The Wild Card Round has been ripe for the picking when it comes to underdogs in recent years. We're targeting a pair of road dogs that aren't getting the respect they deserve in Jason Logan's Wild Card Underdogs. 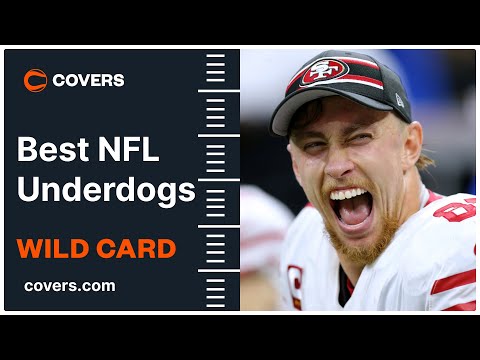 The NFL playoffs went to the dogs last year, with postseason pups posting an 8-5 against-the-spread mark – capped by Tampa Bay’s victory as a 3-point underdog in Super Bowl LV.

In fact, going back to 2017-18, postseason point spread underdogs are 29-17 ATS overall, covering in 63% of those tournament tilts. And the Wild Card Round has been the bigger purveyor of potent playoff pups, with NFL underdogs going 15-3 ATS the past four postseasons.

Will this trend continue or is this Wild Card run for dogs due for regression? Only one way to find out.

These are my favorite NFL Wild Card picks and predictions for those teams getting the points this weekend.

If any team knows a thing about “wild,” it’s Las Vegas. And it has nothing to do with the Sin City nightlife.

The Raiders are coming off one of the wildest games in NFL history this past Sunday night, blowing a 15-point lead with less than five minutes remaining in the fourth quarter and then keeping their shit together long enough to win in overtime – punching the final ticket to the tournament.

That’s nothing new to Las Vegas bettors, who have watched the Silver and Black battle in close contests all season. In fact, the Raiders’ current four-game winning streak has come by a combined 12 points and six of their last seven games have been decided by four points or less.

Las Vegas has leaned on a methodical offensive pace and sound defense during this winning run. The Raiders have dominated time of possession with a playbook that eats up more than 28 seconds between snaps while converting key third downs that keep the chains moving.

Defensively, Las Vegas keeps everything in front of it and protects against the big play, snuffing out yards after the catch with sound coverage and tackling. The Raiders have been especially stingy against the pass during this winning run, allowing a 37.2% success rate per dropback to opposing passers.

It just so happens Vegas faces possibly the hottest quarterback in the NFL in the Wild Card Round, but a QB it was able to limit when the Raiders lost 32-13 to Cincinnati back in Week 11. Bengals star passer Joe Burrow finished the day 20 for 29 for only 148 yards and a touchdown in that win, failing to complete a single pass for more than 17 yards. Keeping Burrow from connecting on those home run balls is the key to the Raiders covering this Wild Card contest.

Cincinnati won the AFC North – and this home game – thanks in part of a friendly home stretch of the schedule, which took the Bengals on the road only twice in the final seven games, and one of those trips was a short hop to Cleveland in Week 18. Despite that cushy slate, Cincy found itself in some tight spots with four of its final five outings decided by five points or fewer.

This spread opened Las Vegas +6.5 - which seemed high - and has slipped below the key number to +5.5 at many books, so we’re jumping in quick and snatching up six with the wild dog from the desert.

To quote the immortal words of Beyonce, I don’t think the Dallas Cowboys are ready for that jelly. And that jelly is a nasty 49ers defense.

The Niners stop unit has been among the best in the league since catching fire back in Week 10. San Francisco sits seventh in EPA allowed per play in that span, boasting a 7-2 SU and ATS mark on the back on a defense that checked seven of those opponents to 24 points or less.

Dallas, meanwhile, deploys a misleading offensive attack that has bullied bad or beat-up opponents to inflate its production in the final two months of the schedule. When you dig a little deeper, you discover some deep-rooted issues – glaring for a team that has this many prime playmakers.

The Cowboys kept the scoreboard humming with 50-plus efforts in wins over Washington and Philadelphia but topped out at 22 points in their four other games since the start of December, needing help from the defense to add some extra tallies.

Dallas is very dependent on its defense to create takeaways, generate extra possessions, hand over excellent field position, or find the end zone. However, when those game-changing plays don’t come, this passing defense is known for getting gashed for big gains, allowing an average of 11.1 yards per completion on the year.

San Francisco’s air attack isn’t stacking up the yards but when the 49ers do throw the ball, they move the chains. The Niners passing offense is No. 5 in DVOA at Football Outsiders and leads the NFL in yards per completion (12.3). Jimmy Garoppolo has thrown 20 interceptions on the year (two in Week 18) but I expect this San Francisco playbook to respect the chaos the Cowboys can cause and keep everything neat and tidy.

This spread opened as large as 49ers +4.5 and has since slid to +3 with some books on the verge of a move to +2.5 with the field goal spread on the underdog priced as high as -125.