It’s hard to believe that Sunday’s NFL Week 8 games will be played on November 1.

This is the time of the year in which teams either go all in on the playoff push or start wondering if its worth it. And with the difficulties of the COVID-19-influenced season, I expect losing teams to start giving less of a crap even sooner into the schedule than normal.

The best NFL betting strategy through it all is getting the better of the numbers. These are our NFL betting tips for the Week 8 odds to bet now and bet later.

The Browns follow their thrilling win over the rival Bengals on Sunday as 3-point home chalk hosting the Raiders in Week 8. Books opened Cleveland as a field-goal favorite Sunday night and already some shops are dealing the half-point hook on the host.

The early money is buying into the Browns, who didn’t look that great in Sunday’s win against Cincinnati. Cleveland quarterback Baker Mayfield had a bad start to the game but got right to the tune of five touchdown passes. That effort, which included a last-second touchdown, was enough to give the Browns their fifth win of the season.

Las Vegas got shelled by Tampa Bay at home in Week 7, allowing Tom Brady and the Buccos to post 45 points – 21 of those in the fourth quarter. The Silver and Black are one of the worst defenses in the NFL, allowing almost 33 points per game. That’s a touch worse than Cleveland's stop unit, which is serving up 31.6 points per outing.

If you’re banking on the Browns, get them now at the clean field goal and avoid that nasty half-point hook in a game that could go either way, considering the defenses involved.

Most books opened the Falcons as heavily-juiced 3-point underdogs Sunday evening, with the points coming with a -120 price tag for Thursday Night Football. The lookahead line for this NFC South showdown was at Panthers -2.5 last week and that looks like where it’s headed considering the early movement for the vig.

Carolina dropped its second straight game in a 27-24 loss at New Orleans, but covered as a touchdown road dog. The Panthers have been competitive in just about every game this season, with an average margin of -0.9 through seven games. This offense, which has overperformed, could have superstar RB Christian McCaffrey back for Thursday too.

The Falcons “Falcon’d” themselves again versus Detroit in Week 7. Atlanta had the game in hand, but an ill-timed touchdown gave the ball back to the Lions in the waning seconds of the fourth quarter and… well, you know how these end for the Falcons.

I’m a little surprised Carolina -3 is discounted, but wait it out and see if -2.5 shows up between now and when McCaffrey’s status is updated.

Yeesh, when the Bills aren’t scoring 30 points a game, they’re one bad football team. The high-flying Buffalo offense has been grounded the past three games, with the team combining for just 51 points over that span – compared to 123 points totaled in the first four games of the schedule.

The Patriots are also going through an offensive crisis, with a combined outpouring of 28 points in their last three contests – including scoring just six in Sunday’s home ass-waxing at the hands of the 49ers. It’s like New England’s offense hasn’t come out of quarantine since the team’s COVID-19 outbreak in early October.

The total for this AFC East grudge match hit the board at 46 points Sunday night and was a favorite play of sharp bettors right away, dropping to 45 in about an hour. These divisional foes are a collective 0-5-1 Over/Under in their last six contests and have gone Under in six of their last nine meetings overall. If you’re on that Under bandwagon, take the U45 now before it sinks even lower.

Given the firepower on both sides and the way the 2020 season is bursting with points like a freshly whacked pinata, seeing this total below 50 is a bit surprising. That may be the early narrative as well, with some books tacking on a half-point move to 49.5.

Pittsburgh is unblemished and coming off a high-scoring thriller against Tennessee in which it scored 27 points but only three of those came in the second half. The Steelers offense stalled like a 1997 Toyota Tercel on a cold Pennsylvania morning and can thank the defense for keeping the Titans at bay down the stretch (and also thank Stephen Gostkowski for missing a game-tying 45-yarder in the final seconds).

The Ravens offense is chewing up the gains on the ground – big surprise – but Lamar Jackson has struggled to throw the football – big surprise (no really) – with a passer rating of 99.2 (compared to 113.3 last year). Baltimore is averaging almost 30 points per game but has played plenty of pedestrian defenses along the way.

These heated rivals have gone Over in their last two meetings, but those totals were almost laughable at 44 and 38 points (HA!). Before those results, the Steelers and Ravens played below the total in six of their previous eight encounters. If you like another Under, hold your horses and wait to see how high this Week 8 O/U goes.

Where can I get the best odds on the NFL? 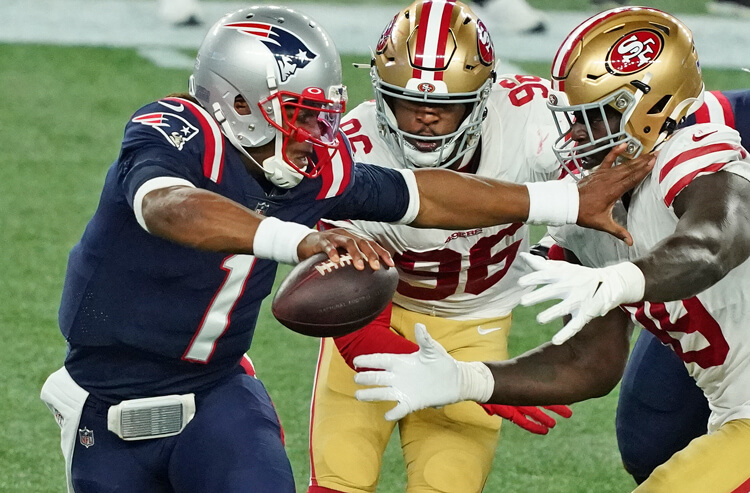