NFL Week 7 is in the books, NFL Week 8 odds are on the board, and several betting factors are already in play. That includes the injury news, which this week features a big loss for a rising Cleveland Browns team: Odell Beckham Jr. is done for the season.

This week’s NFL Cheat Sheet serves as one-stop shopping for that information and more. Covers checks in on NFL Week 8 injuries, weather, consensus picks, Pros vs Joes and more. Check back throughout the week for NFL injury updates, popular picks, and notable contrasts between sharp bets and public money.

Cleveland Browns: Beckham suffered a torn left ACL on the first possession against Cincinnati on Sunday, so he now sets hits sights on next year, while the Browns move on without him. Late Sunday afternoon, The SuperBook at Westgate opened Cleveland a 3-point home favorite against the Raiders.

“We knew he was out for the year when we originally set the number,” SuperBook executive director John Murray said. “He’s worth maybe a half-point to the spread. He’s a good player.”

On Monday morning, the Browns ticked to -2.5. The total opened at 55.5 and was down to 54 by Monday afternoon.

Tampa Bay Buccaneers: Wideout Chris Godwin's injury-plagued season continues, as he was ruled out of Monday night's matchup against the New York Giants with a broken finger. This will be the fourth game Godwin has missed this season, but the Buccaneers have still held as double-digit favorites and in fact were up to -12.5 Saturday.

New York Giants: Running back Devonta Freeman (ankle) is out Monday night against Tampa Bay. The Giants opened as 10-point underdogs and got to +12.5 Friday, and the total in Monday's game has gone from 47.5 to 45.

Seattle Seahawks: Running back Chris Carson has a sprained foot, and his status is questionable for a key Week 8 home game against San Francisco. And Carlos Hyde, Carson’s backup, is doubtful with a hamstring issue. The Seahawks opened -3.5 at The SuperBook, ticked to -3 Monday morning and stayed there all week, sitting at -3 (even) Friday night. The total ticked down a notch from 54 to 53.5.

San Francisco 49ers: Running back Jeff Wilson had a monster game at New England, with 17 carries for 112 yards and three touchdowns, but fell victim to a high ankle sprain. That’s on the heels of Raheem Mostert going on injured reserve with the same injury, so the Niners are thin in the backfield for Sunday’s game at Seattle. The Niners also lost wideout Deebo Samuel to a hamstring injury, which is expected to shelve him a couple of weeks. Still, this line moved from San Francisco +3.5 to +3 Monday at The SuperBook.

Dallas Cowboys: Quarterback Andy Dalton suffered a concussion on a wicked hit at Washington and on Saturday was ruled out for a key key matchup at Philadelphia on Sunday night, in what’s become an awful NFC East. The SuperBook didn't post this game until Wednesday afternoon, opening the Cowboys +7.5 on the expectation that Dalton is out and that rookie third-stringer Ben DiNucci will get his first career start.. "It's a 2.5- to 3-point adjustment for the difference between Dalton and DiNucci," SuperBook manager/oddsmaker Eric Osterman said. The line shot to Dallas +9.5 by late Wednesday night and all the way to -11.5 Saturday.

New England Patriots: Wideout Julian Edelman reportedly had a minor knee procedure done Thursday and will miss Sunday's game at Buffalo, as will wideout N'Keal Harry (concussion). The line at The SuperBook moved from Patriots +3.5 to +4. The total is down to 40.5 from 44.5, though weather is the larger factor there.

New Orleans Saints: Star wideout Michael Thomas (ankle/hamstring) will miss his fifth straight game, sitting out Sunday at Chicago. The SuperBook opened the Saints -2 and got to -5 Friday, then dipped to -4.5 and was at -4 Saturday afternoon.

Chicago Bears: Wideout Allen Robinson was cleared from concussion protocol and could play Sunday against New Orleans. At The SuperBook, Chicago moved from +5 to +4 today. The total plunged from 47 to 42.5 this week, mostly due to sharp play on the Under early in the week. Robinson potentially playing had no impact on the spread.

New York Jets: Wideouts Jamison Crowder (groin) is doubtful and Breshad Perriman (concussion) is out for Sunday's game at Kansas City, with Perriman officially ruled out on Friday, while Crowder suffered a setback. But the Jets remained +19.5, where they've been since Monday, after opening +21.5 Sunday.

Minnesota Vikings: In positive injury news, running back Dalvin Cook (groin) was back in practice Wednesday. Cook missed the Week 6 loss to Atlanta, and the Vikings had a bye last week. The SuperBook moved the Vikings from +7.5 to +6.5 Monday, anticipating Cook's return. "The line may have went down with solid signs of Cook playing."

Green Bay Packers: This was likely expected, but running back Aaron Jones (calf) will miss a second straight week. The SuperBook's Eric Osterman said that was a small factor in the line now sitting at Packers -6, down from the opener of -7.5.

Denver Broncos: Running back Phillip Lindsay is in concussion protocol and is questionable for this week’s home game against the Chargers. The SuperBook opened the game at a pick, and by Monday afternoon, Denver was already a 3-point underdog, though that’s mostly due to bettors’ impressions of each team.

New England Patriots at Buffalo Bills: The forecast calls for steady rain early in the day and a 45 percent chance of showers in the afternoon, but the bigger issue could be winds of 20-40 mph. This total opened as high as 46 points but has come down to 40.5 points as of Sunday morning.

Minnesota Vikings at Green Bay Packers: It's gonna be a little chilly and windy on Sunday afternoon, with temperatures in the high 30s and winds of 25-40 mph, with possibly stronger gusts. The total in this game plunged from 55 to 49.5 at The SuperBook, where manager/oddsmaker Eric Osterman said sharp action landed on Under 54, 53 and 52.

Pittsburgh Steelers at Baltimore Ravens: Rain is in the forecast for Baltimore but is expected to lighten closer to the 1 p.m. ET kickoff but could start up again come the fourth quarter. The total opened at 49 and fell to 46 at The SuperBook.

Las Vegas Raiders at Cleveland Browns: There is a 45 percent chance of showers for this 1 p.m. ET start (and even a risk of snow come the second half), but the winds could be the biggest factor, blowing west up to 50 mph. The total for this game has made a huge drop from 55.5 to 48 points as of Sunday morning.

New Orleans Saints at Chicago Bears: Those famous Chicago winds are expected to reach speeds up to 40 mph on Sunday but will slowly die down over the course of this 4:25 p.m. ET start. Temperatures dip into the mid-30s. The total for Saints-Bears opened at 47 and is now down to 42.5.

Tennessee Titans at Cincinnati Bengals: Wind is predicted to be an issue Sunday, blowing at 20-30 mph in Cincinnati. This Over/Under opened 55.5 and is down to 50.5 as of Sunday morning.

Dallas Cowboys at Philadelphia Eagles: Rain early in the day is expected to clear for this Sunday Night Football matchup. Temperatures will be in the mid-40s with winds blowing up to 20 mph. The total for this NFC East rivalry opened opened 43.5 and is down to 42.5 points.

Tampa Bay Buccaneers at New York Giants: Early forecasts called for rain and potentially wind Monday night, but the updated forecast Sunday night called for a 0 percent chance of precipitation. Wind might be an issue, at 10-20 mph.

Los Angeles Rams at Miami Dolphins: The early-week forecast called for rain, but the updated forecast lowered that to just a 15 percent chance, along with winds of 10-15 mph. It'll be warm and humid, though, at 85 degrees with 78 percent humidity.

Atlanta Falcons at Carolina Panthers: The updated forecast Thursday afternoon calls for an 80 percent chance of rain during the game tonight, as the remants of Hurricane Zeta – now Tropical Storm Zeta – plow through the Carolinas. There will also be winds of 10-20 mph. By Monday night at The SuperBook, the total was down 2 points to 49, but by Thursday morning, it actually rebounded to 51.5.

Pittsburgh Steelers at Baltimore Ravens: The Game of the Week is also one that pits the sharps against the public. PointsBet USA opened the Ravens -5.5 and tumbled to-3.5 by Monday afternoon. The line ticked to -4 Wednesday evening, then returned to -3.5 Thursday morning. "Joes are on the Steelers' side being undefeated, while pros actually like the Ravens at home," PointsBet's Patrick Eichner said.

San Francisco 49ers at Seattle Seahawks: Seattle opened -3 at PointsBet USA and ticked to -2.5, then went back to -3 Thursday morning. "We are seeing pros come for the 49ers, which is why the line moved inside the key number of 3 to 49ers +2.5," PointsBet's Patrick Eichner said of the initial move on this game. "The public is all over the Seahawks coming off a loss."

Tennessee Titans at Cincinnati Bengals: The Titans opened -3.5 at The SuperBook and are now up to 7-point favorites, even with some sharp play beginning to show on the Bengals. "We took some sharp action on the Bengals +6, but we're taking huge parlay money on the Titans spread and moneyline." 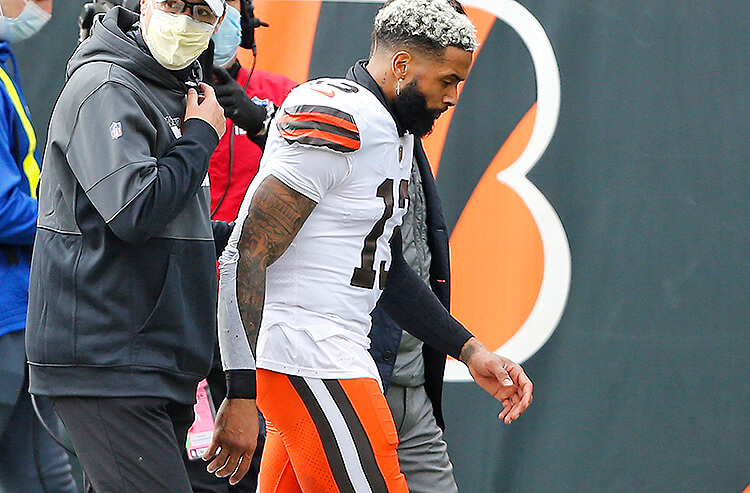