Cowboys vs Saints Thursday Night Football Picks and Predictions: Back Dak on the Attack

Dallas Cowboys QB Dak Prescott should be the difference-maker, especially with reinforcements on the way, against the New Orleans Saints after both teams suffered tough losses on Thanksgiving. Read more in our NFL betting preview for TNF. 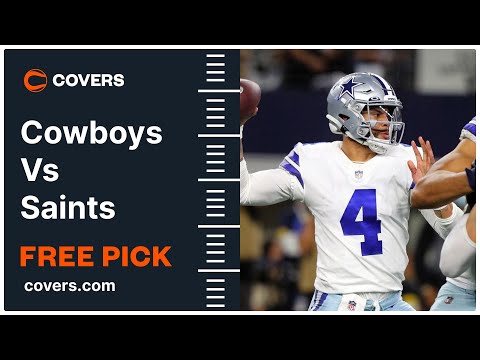 The Dallas Cowboys and New Orleans Saints were each fed servings of humble pie in their Thanksgiving losses, and now both will try to bounce back on Thursday's sparse NFL menu.

The Cowboys will have to win without head coach Mike McCarthy, who tested positive for COVID, while the Saints QB Taysom Hill still has questions swirling about his health.

Dallas is an NFL betting road favorite — but does New Orleans have value as a home dog? Find out in our free NFL picks and predictions for Cowboys vs. Saints on Thursday, December 2.

The line for this NFC matchup opened with the Cowboys as 5-point road favorites. Dallas saw the early money, driving the number to 6, but since then action on the Saints has brought the line all the way down to 4. The total has held fairly steady at the opening number of 47.5.

The Cowboys are 6-0 against the spread versus NFC opponents this season. Find more NFL betting trends for Cowboys vs. Saints.

Cowboys vs Saints picks and predictions

The Cowboys are coming off a heartbreaking 36-33 overtime loss to the Las Vegas Raiders last week. It was their third loss in four games, dropping them to 7-4 for the season. But Dallas still has a comfortable lead in the NFC East (thanks in large part to the rest of the division being hot garbage) and will do their best to bounce back in this one.

Some might say (me included) that coach McCarthy’s absence could be a good thing as this team tries to get back to the basics of what got it off to a 6-1 start. And that is letting Dak Prescott cook. Prescott was averaging 302.2 passing yards while completing 73.2% of his passes with 16 touchdowns compared to just four interceptions over his first six games of the season. That included games against good defenses like Tampa Bay, Carolina, and New England.

Prescott seemed to find his groove again last week against the Raiders, going 32-47 for 375 yards with two TDs and no picks. Prescott and the Cowboys are also hoping to get back both Amari Cooper and CeeDee Lamb for this matchup against a Saints team that got absolutely thrashed by Buffalo last week.

The Saints defense did a decent job at times at trying to slow down Josh Allen & Co. but in the end, he ended up with four touchdown passes while completing 82.1% of his attempts in a 31-6 defeat. The Saints have now lost four straight after going 5-2 over their first seven games.

More troubling was that the Saints couldn’t generate anything on offense. Now, it sounds like they are handing the reins over to Taysom Hill, who has been battling a foot injury, and they are expecting star running back Alvin Kamara to return.

New Orleans knows the way to stay in this game is to control the clock with the run game while attacking the sub-par Dallas rush defense at the same time. But the Saints won’t have the balance the Raiders did in their win last week, and the Cowboys' fourth-ranked pass defense in terms of DVOA can make the Saints offense one-dimensional.

We are backing the better quarterback in this matchup in a game that feels like the Cowboys win by a touchdown.

Your initial instinct with two defenses that rank in the Top 5 when it comes to DVOA might be to hammer the Under. But these offenses might be good enough to take down this total.

For starters, the Cowboys got back to their high-scoring ways, putting up 33 points in last week’s loss. It was the sixth time in the last nine games that the ‘Boys topped 30 points. Now, they go up against a Saints defense that, while definitely solid, has shown some leaks lately.

The Saints have surrendered 29.6 points per game over their last five and now face the NFL’s top-rated offense in total yards per game and third-ranked in scoring.

The New Orleans offense, on the other hand, should get a bit of a spark with Kamara back and Hill under center. With Kamara and Hill, the Saints should be able to churn out some yards against a Cowboys-run defense that allows 4.4 yards per carry on the ground.

And the Cowboys defense has certainly been inconsistent. In their last six games, they have allowed 19 points or fewer three times, but in the other three, they have allowed 29 or more. There should be enough offense in this game to send this one Over.

Dak Prescott is still one of the more underrated quarterbacks in the NFL. Even without his top two wide receivers, Prescott went out and completed 32 of his 47 pass attempts for 375 yards and a pair of touchdown tosses.

It sounds like he will get back at least one of those wideouts against a Saints pass defense that ranks 14th in DVOA and just got picked apart by Josh Allen. Prescott has completed 24 or more passes in four of his last five starts and is averaging 27.8 completions per game over that stretch.

While the Saints don’t usually give up a ton of completions, the last time they faced a decent pass-first offense was the Buccaneers at the end of October where they allowed Tom Brady to complete 28 of his 40 attempts.

With Dak in a groove and the Cowboys knowing they’ll need to rely on his arm for a win, backing him to go Over his completions total is a solid bet.

Cowboys vs Saints Thursday Night Football Picks and Predictions: Back Dak on the Attack
Provided by