Cowboys vs Cardinals Preseason Picks and Predictions: Cloudy With a Chance of Murray

With Dak Prescott ailing again, Dallas will be digging into its bench while Arizona rolls out its starters for preseason reps. Find out if the 'Boys can bounce back from last week's HoF Game loss with our Cowboys vs. Cardinals picks.

The Dallas Cowboys play their second preseason game of 2021 when they visit the Arizona Cardinals in Week 1 of the exhibition slate.

Dallas is coming off a 16-3 loss to Pittsburgh in the Hall of Fame Game last Thursday, kicking the tires on its quarterback depth chart for an unimpressive offensive effort. Arizona, on the other hand, will give its stars some run with the preseason slate trimmed to three games this summer. That’s why the Cardinals are slight favorites.

Here are our NFL free picks and predictions for Cowboys vs. Cardinals in Week 1 of the NFL preseason.

Getting a head start on the preseason isn’t always a good thing. The last eight teams to compete in the Hall of Fame Game went 3-5 SU and ATS in their Week 1 preseason contest. Dallas lost 16-3 to Pittsburgh in the 2021 HoF Game last Thursday. Find more NFL betting trends for Cowboys vs. Cardinals.

There will be no Dak Prescott sighting in Week 1 of the preseason, with the Cowboys’ star QB limited with shoulder soreness. Dallas fans threw up in their mouths just a little when the team announced Prescott was undergoing a precautionary MRI this week.

That once again leaves starting quarterback duty to Garrett Gilbert, who was 9 for 13 for 104 yards versus the Steelers in Canton last week. Gilbert is pretty much locked into the No. 2 role, leaving the Cowboys to take a long look at Ben Dinucci and Cooper Rush – neither of which played great in the HoF Game.

In contrast, the Cardinals are planning to give starting QB Kyler Murray some reps in the exhibition opener. Head coach Kliff Kingsbury hasn’t nailed down the exact workload but told reporters Murray would definitely get some run – as well as Arizona’s other first teamers. Behind Murray is veteran passer Colt McCoy and former CFL pivot Chris Streveler.

McCoy played in four games for the Giants last year and will get a good share of snaps as the Cardinals’ main backup. Streveler could be the star of the show on Thursday, possessing some serious wheels and garnering comparisons to dual-threat QBs like Taysom Hill. While with Winnipeg of the CFL in 2019, Streveler ran 127 times for 726 yards and 12 TDs on the ground. When plays break down, as they tend to do in the preseason, he’ll be able to make lemonade.

Kingsbury went 1-3 ATS in his first preseason go-around in 2019 before the 2020 exhibition plans were scrapped due to COVID-19. Mike McCarthy’s all-time preseason coaching record dropped to 27-26 SU and 27-23-3 ATS with the loss to Pittsburgh last week.

With the Prescott drama, Hard Knocks cameras rolling, and plenty of injury-prone standouts just trying to survive camp, don’t expect McCarthy and the Cowboys to roll out many first-teamers on Thursday.

At first glance, Dallas had some success on the ground versus the Steelers in the Hall of Fame Game, rushing for 109 yards on 21 carries. But two runs accounted for 52 of those yards, one of which was a 27-yard QB scramble from Dinucci. The Cowboys also fumbled four times, turning over two of those loose balls.

Dallas passed 43 times last Thursday in an attempt to sure up its second and third string roles, and it will be more of the same in Week 1. Ezekiel Elliott and Tony Pollard are cemented in at running back and will receive little to no touches against Arizona, putting the point-scoring duties on Dinucci and Rush – a tactic that produced just three points against the Steelers.

The Cardinals’ up-tempo offense with starters in tow is why this Over/Under is spiking at 40 points – a lofty total for a preseason game. Even then, it’s asking a lot from Arizona to score the lion’s share of the points. A 30-10 Cardinals win still seems generous to Dallas.

Arizona’s first-team defense will also get some run on Thursday, a stop unit that ranked seventh in Pass Defense DVOA at Football Outsiders last year and recorded 48 sacks and a pressure percentage of 25.9 (eighth in the NFL). If the Cardinals can cook up anything close to this on Thursday, the Cowboys’ backups will crumble.

Week 1 preseason games have leaned to the Over in recent years, but this total is just too high (only four Week 1 totals of 40-plus since 2013), especially for the opening game of the exhibition slate when teams reach deep into the depth chart and lack the cohesion and chemistry found later in the summer. 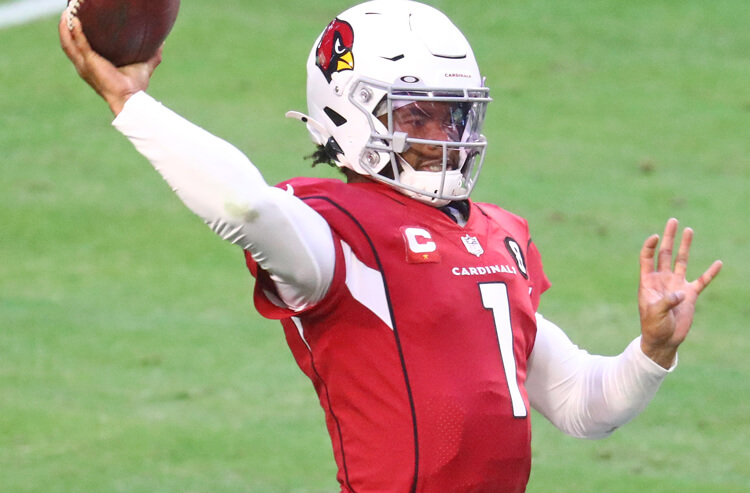 Cowboys vs Cardinals Preseason Picks and Predictions: Cloudy With a Chance of Murray
Provided by