NFL (preseason) betting kicks off Thursday when the Washington Football Team travels to Gillette Stadium. Ron Rivera being fairly open about his preseason plans gives us a bit of info. We dissect Belichick's mind with our Washington vs. Patriots picks.

Week 1 of the NFL preseason opens on Thursday. For some football bettors, this isn’t news. But for others, the exhibition slate is a prime opportunity to pad their NFL betting bankroll before things get real in September.

The Washington Football Team visits the New England Patriots on Thursday night, with the host Pats getting two points inside Gillette Stadium.

We dig into the camp news, coaching plans, and preseason prep to give you the edge against the exhibition odds. Here are our NFL free picks and predictions for Washington vs New England in Week 1 of the preseason.

There were no preseason games in 2020 but in the two years prior, Week 1 preseason contests produced a 20-11-1 Over/Under count (64.5% Overs). Find more NFL betting trends for Washington vs. Patriots.

Washington head coach Ron Rivera has been pretty forthcoming with his plans for the preseason. Patriots coach and part-time sphinx Bill Belichick surprisingly has not.

Rivera told the media this week that he’s going to play his starters plenty in the preseason games, leaning on these tune-up tilts to give the first teams real-game reps – especially the offense. Washington has veteran QB Ryan Fitzpatrick under center this season and Rivera isn’t shying away from playing the bearded Harvard product in August.

With the exhibition schedule shrinking to three games in 2021, Rivera recognizes the urgency around preparation. As of this writing, the WFT didn’t set a hard cap on playing time, but Rivera says he wants Fitzpatrick to gain command of the offense, go through his checks and spread the ball around – something not easily crammed into the limited drives often reserved for starting QBs in August.

Behind Fitzpatrick on the depth chart are Carolina castoffs Taylor Heinicke and Kyle Allen, who both got reps under center in the game of QB musical chairs in the nation’s capital last season. And speaking of past Panthers passers, Rivera lines up across from his former franchise player Cam Newton on Thursday night.

Newton is hanging on to the Patriots’ QB1 job by a string this summer, fighting off first-round pick Mac Jones for the starting gig. With Washington expected to roll out some starters on defense – at least in the first quarter – Belichick and OC Josh McDaniels will get to kick the tires on their QB situation, more importantly, see if Newton is up to snuff.

Jones will get his share of snaps in his first taste of pro action, leaving New England with a crumbling veteran, a rookie QB, and lifelong Patriots backup Brian Hoyer (on his third go-around with the team) as the quarterback rotation.

Belichick has never been passive about the preseason (hell, even Brady used to play a lot), going 14-7 ATS in Week 1 exhibition games during his tenure in New England. However, preseason team trends are about as stable as Tesla stock after an Elon Musk tweet and River Boat Ron is doing us a solid by playing his starters.

The total for Thursday’s game opened at 32.5 back in late July at some books and steadily climbed in early August, jumping to as high as 36.5 points once Rivera revealed his plans.

Washington’s defense is very strong, but could soften up as starters hit the pine in the second half, and the Patriots are working many new faces into their stop unit, which will take time to gel over the exhibition slate.

Both teams are focusing on their passing game entering Thursday, which means plenty of calls to throw the ball. That equals big gains and clock stoppages on incompletes – always good for Over backers.

We aren’t getting the best of the number at Over 36 but there’s something to be said for following the steam in the summer schedule, as the NFL preseason book is shark infested waters dominated by informed bettors.

Did you know that if you parlayed this week’s NFL Washington vs. Patriots picks, you could win $26.45 on a $10 bet? 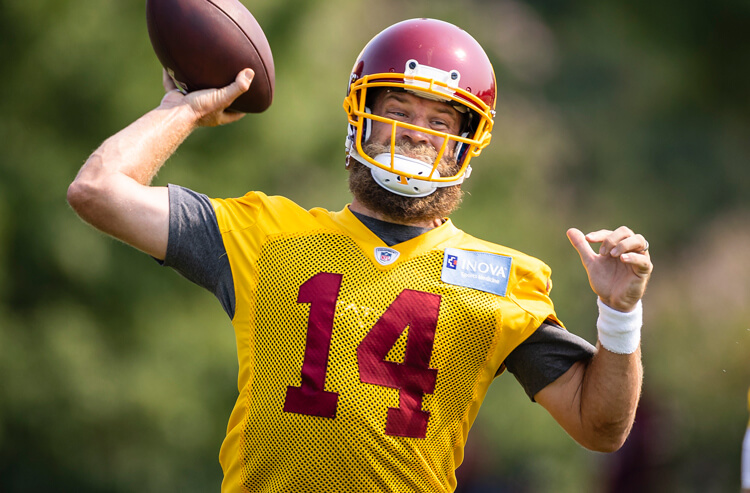