While the Browns have already announced who won't be playing (basically every starter), Jacksonville will be showcasing No. 1-overall pick Trevor Lawrence (in some capacity). That's enough for us to lean with the Jaguars in this preseason Week 1 matchup.

The NFL preseason really gets started this weekend and although most big names will be absent there is one name on everybody’s lips: Trevor Lawrence.

The appearance of the first overall pick will likely take this game from one watched by only the football starved and NFL betting enthusiasts to must-view television by the whole football community.

How do we think the No. 1-overall pick will do in his first professional appearance? Check out our free NFL picks and predictions for the Browns vs. Jaguars on August 14 to find out.

The Under is 5-1 in the Jaguars' last 6 games as a home favorite. Find more NFL betting trends for Browns vs. Jaguars.

As our How To Bet On NFL Preseason guide tells us, you should know who the quarterbacks are.

We know already who we’ll see for the Cleveland Browns, or more crucially, who we won’t. Head coach Kevin Stefanski has already announced that Baker Mayfield won’t feature in this game. That means we should see Case Keenum take over under center, but Browns beat writer Zac Jackson believes he’s unlikely to play much either, if at all. That’ll leave Kyle Lauletta, formerly a fourth-round pick for the Giants, taking the majority of reps.

Things are less certain with the Jaguars though and we’re unsure how Urban Meyer will approach a preseason game. One thing we’re fairly certain of is that Trevor Lawrence will see playing some time, as will Gardner Minshew.

It’s widely expected that Lawrence will be the starter come Week 1 but there is still some talk of a QB competition in camp. Reports have been glowing about the former Clemson star, with his performances on Wednesday leaving many open-mouthed. He looked particularly deadly in the red zone, with Lawrence running the offense well and showing his ability to find tight windows, showcasing why he should be the starter when the regular season kicks off.

Lawrence will have to earn that spot though and this game against the Browns will give us a first look at him in teal on the field. He’ll really be looking to lay down a statement in this game — but he won’t be the only one.

Minshew, like Lawrence, doesn’t lack confidence and the third-year QB will be desperate to perform. He’s had plenty of first-team reps throughout training camp and believes that he’s in competition with Lawrence for that starting spot. The reality for Minshew, however, is that his future is likely elsewhere and he is surely a trade candidate, for teams like the Colts (if the Carson Wentz injury is worse than feared).

Over the past two years, he’s proven himself a solid quarterback and in the right organization, he could really grow. With those two under center, against a Cleveland team who we believe will largely be made up of second-stringers, it’s impossible to look at anyone but the Jaguars winning this and covering the spread too.

We don’t know much about Urban Meyer as an NFL coach but throughout his illustrious college career, he’s shown that he’s a winner. Look out for him to show no mercy on Saturday... even in a preseason game.

Normally I’d aim to use stats to build my picks but it’s hard to do so in a preseason game, especially one with a brand-new NFL coach and a number of stars new to the league. We simply don’t know what to expect.

Aside from the Lawrence and Minshew battle, this will be the first time we see Lawrence’s Clemson teammate Travis Etienne in action, with many unsure on how the running back will fit into the Jaguars system — will he be primarily in the backfield, or will we see him line up as a receiver?

I’ve spoken highly of the two quarterbacks we’ll see in action for the Jaguars but when it comes to betting the total I’m more focused on who Cleveland has on the field. We know they don’t have Mayfield and likely won’t play Keenum much, if at all. That leaves Lauletta under center, who has had just five passing attempts in the NFL, accumulating for a total of 0 yards.

Despite the positive buzz around receiver Donovan Peoples-Jones throughout camp, it won’t matter for Cleveland if there is such an inferior QB in play. We also won’t see their dynamic backfield duo of Nick Chubb and Kareem Hunt, arguably the best 1-2 punch in football: Instead we’ll see D’Ernest Johnson and rookie Demetric Felton, who can play at RB and WR.

While I can see Jacksonville scoring 3 touchdowns, it’s hard to see Cleveland finding the endzone at all, let alone more than once, which makes the Under very attractive here, with 37.5 feeling unattainable. 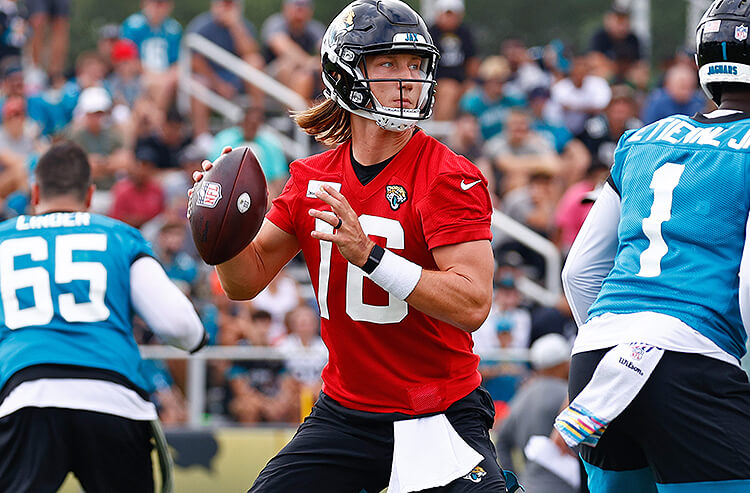