A Week 18 game that matters! The Colts are massive road favorites vs. the Jaguars this Sunday, but Indy has everything to play for (aka the playoffs) while Jacksonville has waived the white flag. Our NFL betting picks aren't overthinking this — back Indy.

The Indianapolis Colts wrap up the regular season by visiting the Jacksonville Jaguars in a Week 18 AFC South clash.

There is always plenty of motivation to win a divisional game but the Colts actually need to win on Sunday, as it will secure them a playoff berth. NFL betting lines expect Indianapolis to deliver, with the Colts sitting as massive road favorites.

Here are our best free NFL picks and predictions for Colts vs. Jaguars on Sunday, January 9.

The total has remained constant since opening at 44, while the spread has shifted ever-so-slightly, going from the opening mark of 14.5 points to the current mark of Jacksonville +15 as of Friday morning.

If you're signing up for a new sportsbook for NFL Week 18, here are two of the best welcome bonuses available:

The Colts are 6-0 ATS in their last six games on the road. Find more NFL betting trends for Colts vs. Jaguars.

Colts vs Jaguars picks and predictions

The NFL season comes to a head with a series of divisional games, and many of those games lack real motivation beyond pride. Indy's trip to Jacksonville to face the somehow not one of those, as there are very real playoff implications in this game.

Simply put, it’s win-and-you're-in for the Colts. If they beat the Jaguars, as they did in November, then they’ll grab a spot in the playoffs. If (and it’s a big if) they somehow lose, then Indianapolis' fate rests on the result of the Chargers and Raiders SNF matchup, where wackiness could ensue.

As funny as that would be, let's be real: it isn’t happening. The Colts are arguably the best team in the NFL that isn't going to win their division and will cause a stir in the playoffs — when they make it.

In mid-November, we saw the Jaguars travel to Indianapolis and fall 23-17 in a game where the Colts took an early lead and never gave it up... but it was closer than perhaps it should have been. That game closed at Colts -10.5 and with the Week 18 spread sitting at a disgustingly large 15 points, we’d normally look back at that past meeting, glance at the large number and then likely pick the Jags.

That simply isn’t possible, however, having watched Jacksonville's 50-10 annihilation at the hands of the Patriots last week. We know that the Patriots' defense is elite but it was clear in that game that the Jaguars had checked out. All the talk about pride and doing it for the jersey feels irrelevant. There’s going to be a new head coach coming in over the summer and performances in these last few games likely don’t matter, unless you’re a real edge of the roster guy, but even then you’re unlikely to be seeing a huge amount of gametime.

The Colts offense is ranked eighth in weighted DVOA, with the Jaguars in 28th. That isn’t a surprise if you’ve watched much of either team this year, as Jags have struggled to build anything around Trevor Lawrence (who has looked awful himself) and the Colts have been reliant on Jonathan Taylor, who has been firmly in the MVP conversation during the second half of the season.

There’s a huge gulf in quality and performance levels in both offenses... but that’s nothing compared with what we see on defense. The Jaguars are ranked 30th in weighted defensive DVOA — with the Colts in fourth.

We don't need to convince you that the Colts will win — the only real question here is whether they’ll be able to cover the lofty spread. For us, it looks inevitable. This is a must-win game against one of the league’s worst teams... that has also checked out for the season.

Don’t worry about the Colts not winning in Jacksonville since 2014, it’s one of those weird facts which doesn’t really have much input on the result of Sunday’s game.

In backing the Colts to cover that giant 15 point spread, we were tempted to back the Over here — especially when looking back at the way the Jaguars capitulated to the Patriots — but there are some differences between last week and what we expect in Week 18.

First, the Jags are on their home field, where they give up 24.75 points per game compared to 31 ppg on the road. Second, they’ll be getting some players back, as they were missing eight starters and 13 total players due to COVID, so they should be marginally more competitive.

It’s not going to be enough to give Jacksonville a chance of winning the game but it will be able to keep the Colts relatively low, even if it's unable to find the endzone many times itself.

We’ve been through it already, but the Colts absolutely must win this game. They win and they’re in the playoffs. Don’t worry about previous results at TIAA Bank Field, don’t worry about what happened when they met in November, just worry about the here and now.

And right here and right now, the Colts are a far superior football team to the Jaguars in every aspect. They’re better coached, have better players, and are in exponentially better form than Jacksonville.

You can rely on the Colts and that brilliant offensive line to stomp all over the Jaguars on Sunday and secure the points needed for them to cover. Don’t overthink this and back the better team that has something to win for. 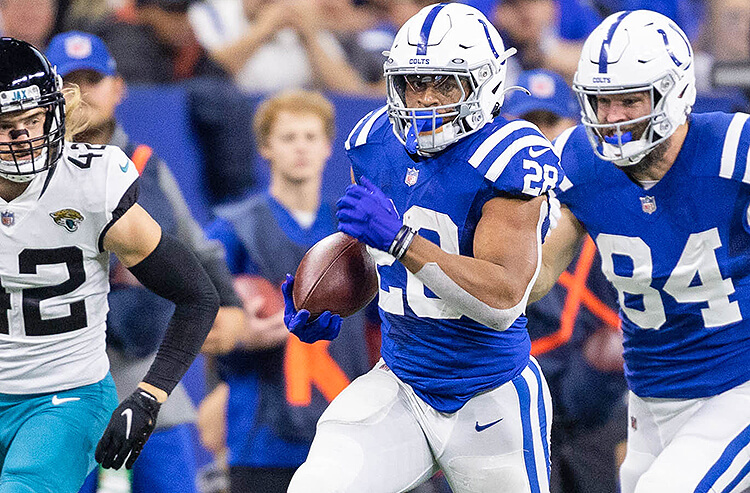