Cardinals vs Cowboys Week 17 Picks and Predictions: Complete Cowboys Too Much For Cards

The Cards are struggling, losing three straight and five of eight, and things won't get easier in Week 17 with a visit to Jerry's World to face the red-hot Cowboys. Dallas is laying less than a TD in this game — and our NFL betting picks love that value.

The Dallas Cowboys have already clinched the divisional title, but the top spot in the NFC is still up for grabs when they host the Arizona Cardinals for one of Week 17's marquee matchups.

Arizona has already punched its ticket to the postseason, but the freefalling birds have dropped three straight games and are NFL betting underdogs in Jerry World this Sunday.

Here are our best free NFL picks and predictions for Cardinals vs. Cowboys on Sunday, January 2.

The line opened at Cowboys -3.5 but that spread has grown, with books showing Dallas -5 or -5.5 as of Thursday morning. The total hasn't moved as much, shifting up 1.5 points from the opening mark of 50 to its current 51.5.

If you're signing up for a new sportsbook for NFL Week 17, here are two of the best welcome bonuses available:

The Cardinals are 2-8 ATS this year against teams with winning records. Find more NFL betting trends for Cardinals vs. Cowboys.

Cardinals vs Cowboys picks and predictions

The Cardinals are in a late-season swoon, with the offense struggling and the team showing a concerning lack of disciplined play.

Last season, Arizona started 6-3 but lost five of its last seven games to end the year 8-8 and miss out on the postseason. The Cards have already locked up a playoff spot in 2021, sitting at 10-5, but again are fading down the stretch with three consecutive ugly losses (SU and ATS).

First, they got beat up on MNF by a Rams team missing a number of key players due to COVID. Then, an inexcusable 30-12 loss to the cellar-dwelling Lions and, most recently, a pathetic display in a 22-16 loss to Indy on Christmas Day where Arizona took 11 penalties, missed two field goals (plus an extra point), and gave up a safety.

After scoring 30+ plus in six of its first seven games, Arizona has topped 30 points just twice in its last eight contests, averaging 21.1 points per game in that span.

Things have really gotten ugly since star wide receiver DeAndre Hopkins suffered a season-ending injury in Week 14, as quarterback Kyler Murray has just two passing TDs in his last three games, failing to complete more than 65.3% of his passes in each of those matchups.

Dallas, on the other hand, seems to be back in a groove reminiscent of its early-season form. After starting 6-1 SU (7-0 ATS), the Cowboys proceeded to lose three of their next four (coinciding with QB Dak Prescott recovering from a midseason calf injury) but America's Team has ripped off four straight W's (SU and ATS) entering this game — three of which came on the road and the most recent being a 56-14 thrashing of Washington here in Arlington.

What makes the Cowboys scary is that it's not just Dak and the offense being healthy that's powering this team: The defense is terrifying as well. Dallas' stop unit has forced 14 turnovers during this four-game streak, along with 13 sacks and just 181.5 yards per game.

Yes, those wins were over the Giants, Saints, and Washington (twice) — all horrible offenses — but guess what? The Cardinals offense is bad right now too.

Dallas has covered the spread in seven of its last nine home games and five of its last seven games when laying points — and they should cover again this Sunday too.

While the Cardinals offense has struggled lately, the defense hasn't been as bad, sitting near the middle of the pack in points allowed (23.4) and passing yards (232.8) per game over the last six weeks. That said, Arizona's offense still ranks fifth in overall defensive DVOA for the year (per Football Outsiders), and is generally balanced against both the run and the pass.

Fortunately for Under backers, the Cardinals are not exactly a rushing juggernaut (22nd in rush offense DVOA this year), meaning their best chance at scoring is challenging Dallas' destructive pass defense.

This game's total currently sits at 51.5, a number that nine of Arizona's last 11 games — and seven of Dallas' last nine — have stayed Under.

Both offenses are capable of putting up points, but with two solid defenses — especially the silver and blue — we're leaning with this again staying below the total.

Dallas star left tackle Tyron Smith returned to practice this week after missing the last two games with an ankle injury, which would further strengthen an already strong offensive line.

Ironically, what we're focusing on this week is away from the left side of the Cowboys' O-line, where Dallas has absolutely mauled opponents. The Cowboys send roughly 24% of their carries to the right side, averaging 5.5 ypc (third in NFL), and the Cardinals are fourth-worst in the league in allowing 5.4 ypc to the right side.

Dallas also does damage between the guards, running 54% of the time with an NFL-best 4.93 adjusted line yards — and Arizona allows the fifth-most ypc (4.5) up the middle this year.

The Cowboys also love to rip off chunk runs, with 11% percent of their carries going for 10+ yards... and (you guessed it) the Cards get gashed more than anyone, giving up 10+ yards on 15% of opponent RB carries — worst in the league.

What does it all add up to? A good Sunday for Dallas RB Ezekiel Elliott, who continually shows signs of improvement as he recovers from a midseason knee injury.

With favorable conditions to rip off a few chunk plays, in a game that shouldn't be a massive blowout like previous weeks (meaning he will get four quarters worth of carries), we're liking the value on Zeke to go Over his longest rush prop in Week 17. 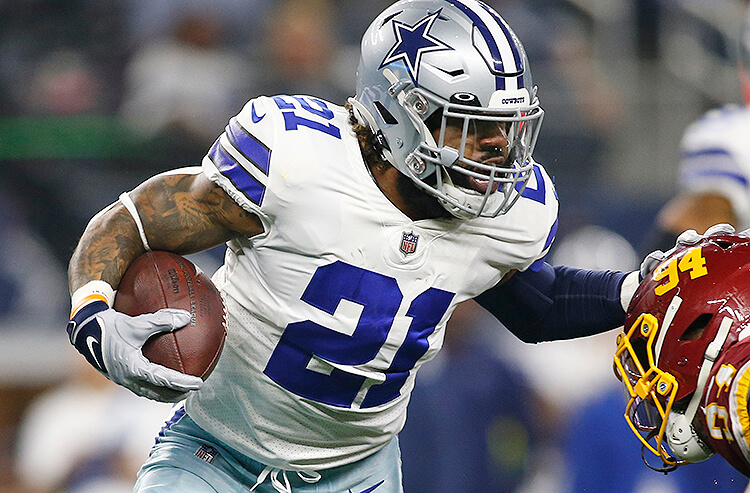 Cardinals vs Cowboys Week 17 Picks and Predictions: Complete Cowboys Too Much For Cards
Provided by