Isaiah McKenzie has seen his role increase in the Bills offense, culminating in his best game of the season on Thanksgiving. With the Patriots focused on Stefon Diggs and Gabe Davis, our betting picks examine if McKenzie is in an ideal spot. 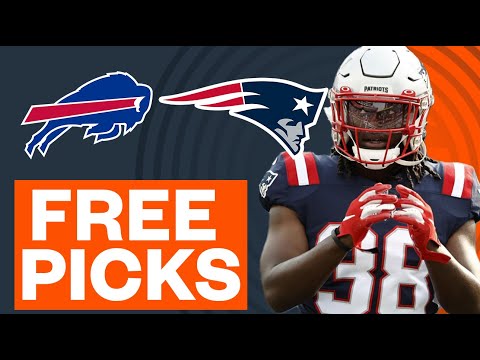 The Buffalo Bills and New England Patriots get that classic AFC East bad blood pumping for the first time this season on Thursday Night Football in Week 13.

Both clubs are coming off a Thanksgiving game last Thursday, so the mid-week matchup won’t be as derailing as it usually is for teams. Buffalo opened as a 5.5-point road chalk but early action on the home side has trimmed this spread.

The Bills are trying to get untracked after a wobbly four-week stretch in which the team is 2-2 SU and 1-3 ATS, including a nail-biter at Detroit last Thursday.

New England had a three-game winning streak snuffed out in Minnesota on Thanksgiving. The Patriots’ validity is in question, with their six wins coming against weaker foes, but records can often get tossed out the window when it comes to heated divisional rivalries.

I break down the spread and total for Thursday Night Football and give my best NFL picks and predictions for Patriots at Bills on December 1. Be sure to also check out Josh Inglis' three favorite TNF player prop picks and Jared Hochman's Josh Allen prop picks for this matchup!

Bills vs Patriots picks and predictions

Most receivers would cringe to see Bill Belichick’s defense on the schedule, but not Bills WR Isaiah McKenzie.

McKenzie celebrated a career day against the Patriots on December 26 last year, catching 11 of 12 targets for 125 yards and a touchdown in Buffalo’s 33-21 win. Granted, McKenzie saw extra targets with fellow WR Gabe Davis out in that game, but he also went 3-for-3 on catches for 45 yards in the big Wild Card win over New England in the playoffs.

Not only is McKenzie walking into Week 13 with the upper hand on his AFC East rival but he’s coming off his best performance of the 2022 season, hauling in six of 10 targets for 96 yards and a score in the win over Detroit on Thanksgiving.

McKenzie’s snap counts have climbed in the back half of the schedule (37.6 first five games vs. 43.6 last five games) and Bills offensive coordinator Ken Dorsey stressed how important McKenzie’s production in the slot is heading into this matchup with New England, which ranks No. 1 in EPA allowed per dropback and No. 1 in DVOA versus WR1s.

“You try to design stuff and create opportunities for different guys to be primary receivers on different concepts and at times they get open, at times defenses do a good job in taking them away,” Dorsey told the media. “So it's good to see Isaiah come up with a big game with the production that he had and really kind of take some of the pressure off of the other guys and create issues for defense with his speed and what he can do with the ball in his hands after the catch."

The 5-foot-8 speedster out of Georgia will once again be busy in the slot for Buffalo. The Patriots secondary will be putting its energy into stopping Stefon Diggs and Davis and with New England’s pass rush generating the second-highest pressure rate in the land, QB Josh Allen will need to get the ball out quickly underneath to McKenzie.

McKenzie has topped his receiving yards total in two of his last three games (the O/U at 20.5) as he worked his way back from a head injury that cost him contests in Week 5 and Week 7. He was shut out in the win over Cleveland in Week 11, getting only 26 snaps, but bounced back with that big performance on Thanksgiving.

After opening as low as 25.5, his receiving yards prop for Week 13’s trip to Foxborough is sitting no lower than 27.5 while the rest of the market is as high as 30.5. With his role in the offense growing, his past history versus the Pats, and his explosiveness to break off big plays, I like “Lil Dirty” to do the deed on Thursday night.

This point spread opened at Buffalo -5.5 on the road and sat there for a while, as these teams played last Thursday, and many books hung a look-ahead line. However, we started to see action on New England come in on Monday afternoon and drag this spread as low as Buffalo -4.5 at some books.

The Patriots are 5-2 SU in their last seven games after a slow start to 2022. New England has leaned into its defense to get the job done but hasn’t played the toughest slate of opponents in that span — specifically at the quarterback position. Those five victories have come against rival QBs Jacoby Brissett, Jared Goff, Sam Ehlinger, and Zach Wilson twice.

This Bills attack, led by Allen, is one of the best offenses Belichick’s defense has faced all year and has continued to produce points during Buffalo’s skid, despite Allen playing through a nagging elbow injury. Buffalo has scored 28, 31, and 30 points in the past three outings.

According to Covers Consensus, 63% of picks are on the visiting Bills despite the line move away from New England, indicating that bigger bets and more respected wagers are taking the points with the Patriots.

Since Tom Brady left New England, the Bills have won four of the past five meetings with the Pats, including a 47-15 blowout win in the AFC Wild Card Round last January. The lone loss was the wild wind game in Orchard Park last December.

The Over/Under total for Thursday Night Football hit the board at 45.5 points on Sunday night and quickly shortened to as low as 43 with one-sided play on the Under in this divisional matchup.

We last saw the Patriots put up 26 points in the loss at Minnesota on Thursday, but that production was sparked by the fast indoor track and a soft Vikings defense. New England still only ran 55 total plays in Week 12 and enters this Thursday's matchup 27th in plays per game and the third slowest pace in terms of seconds per play at Football Outsiders.

The Patriots do have a number of offensive players on the injury report this week, including WRs Jakobi Meyers and DeVante Parker being limited in practice, as well as three starting offensive linemen listed as questionable.

New England’s defense may have not faced a high-powered slate of rival attacks, but the advanced metrics love them some Belichick with the Pats ranked out No. 1 in EPA allowed and No. 2 in DVOA. That said, New England caved for 33 points to a quality Vikings offense on Thanksgiving.

The Bills defense has been extremely shaky the past four games, due in part to injuries stacking up on the stop unit. Buffalo is missing bodies in the front seven as well as the secondary, with the biggest loss being DE Von Miller, who left Week 12 with a knee injury.

The Bills and Pats played Over in their two most recent meetings, with Buffalo piling on with scores of 33 and 47 points. Since Brady bailed on New England, these foes have gone 3-2 O/U.

The road team is 19-7-2 ATS in the last 28 meetings between the Bills and Patriots. Find more NFL betting trends for Bills vs. Patriots.