Buffalo's star QB has had issues completing passes and avoiding INTs lately, and our free NFL prop picks don't anticipate that stopping in a TNF divisional showdown vs. New England — but could he find success using his legs instead of his arm?

Finally — a Thursday Night Football matchup (non-Thanksgiving edition) we can get excited about.

A divisional matchup! Teams that aren't five games below .500! Players who are actually on people's fantasy teams!

Yes, Week 13 odds kick off with the Bills visiting Foxboro to face the Patriots — with the biggest focus (and my betting spotlight) on Josh Allen props.

Buffalo's star QB has been in a bit of a rut lately, and the lines this week for his NFL player props are depressed against a stout New England defense. My free NFL picks don't expect Allen to suddenly get back to his early-season ways — read below to see how I'm betting Allen for TNF.

For more Thursday Night Football best bets, be sure to also check out our full Bills vs. Patriots betting preview and our favorite TNF prop picks.

In last week's article, I picked on Kirk Cousins to throw an interception against a tough New England Patriots secondary that loves to ball hawk.

That bet cashed in the first quarter... and we're going back to the INT well this week, as Allen has been tossing even more picks than ol' Kirky of late... and New England is still hunting for turnovers.

Allen is tied for the league lead with 11 interceptions this season, with seven of them coming in his last five games. Part of it is volume (he has the fourth-most dropbacks this season) and part of it is a lack of a running game (the Buffalo Bills are among the worst teams in the league in rushing yards from running backs) scaring the defense out of focusing on pass defense.

These problems have really come to light in goal-to-go situations, where Allen is sixth in passing attempts but has just a 42.9% completion rate and three INTs.

Now compound those issues against a Patriots defense that generates pressure 27.5% of the time (second-most in the NFL) but is only 15th in blitz rate, meaning they can get to the QB and keep extra guys in coverage, plus they absolutely shut down opposing running attacks, giving up just 61.3 rushing yards per game over their last four contests.

New England's pick of Cousins in Week 12 was its 12th of the season, tied for fourth-most in the NFL, and the Pats have at least one interception in nine of their last 10 games.

I anticipate Devin Singletary and James Cook offering little help to the Buffalo offense on Thursday, meaning lots of Allen passing attempts... and the volume game leads me to believe another interception will be coming.

New England allowed 31 completions to the Vikings last week, which was an extreme outlier considering that heading into that game:

All this to say, I wouldn't bank on another night of the Pats allowing a boatload of completions, especially with Belichick getting a full week to prepare for this pivotal showdown.

Allen, meanwhile, is starting at a completion total of 23.5 this week, which is just the third time in his last 10 games he's faced this number, as he normally resides at 24.5 or even 25.5 as a line.

He's been struggling against his total lately, regardless of the number, with the Under hitting in six of his last eight games and he's logged 20 or fewer completions five times.

He averages 23.8 completions for the season, a number that has dipped to 21 per game over his most recent eight contests, and facing a defense that allows the fifth-fewest completions per game and the lowest completion percentage does not have me confident in him breaking his recent Under stretch.

There is also a concern about how much the Bills will have the ball: The Patriots had just 23:43 of possession last Thursday, their second-worst total of the year and just the second time in the last seven games they didn't win the TOP battle.

Meanwhile, Buffalo has lost the TOP matchup in six of their last eight, and New England will certainly want to establish the run, grind the clock, and limit the overall number of Bills drives.

So yes, the Buffalo offense will be mostly Allen, but he may not have the ball enough to rack up enough completions against an elite defense to clear this number.

The numbers aren't in favor of Allen having an overly successful passing day, but I am confident he should be able to cash in on a rushing prop — mainly his longest run total of 15.5 yards.

The Pats have only really faced two true running threat QBs this year in Lamar Jackson and Justin Fields, with Jackson going for 107 yards (long run of 38 yards) and Fields totaling 82 yards (long of 20).

With lots of pressure expected, Allen will certainly be taking off a few times — I'd bank on him breaking off at least one big run (and also possibly being Buffalo's leading rusher for the game). 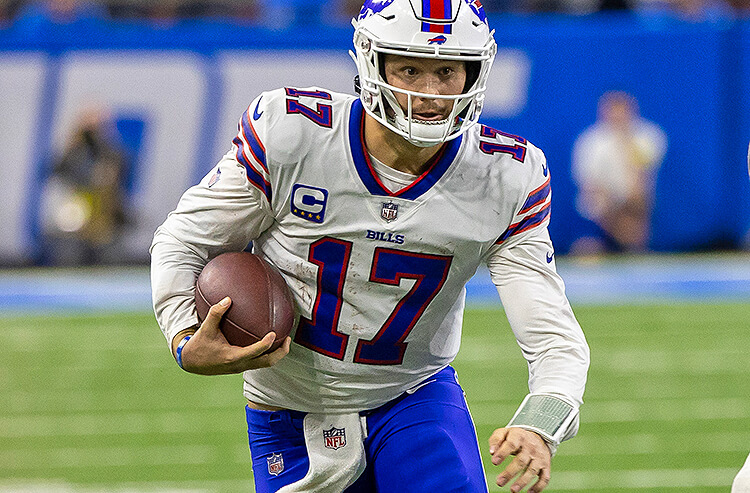