Bills vs Dolphins Week 2 Picks and Predictions: Can Fins Steer Themselves to 2-0?

After being stymied by Pittsburgh's suffocating D last week, Buffalo gets to try and pull even with the only AFC East team in the win column. Find out if Miami is a bounce-back target for Josh Allen & Co. with our Bills vs. Dolphins picks.

A Week 2 divisional dance between the Buffalo Bills and Miami Dolphins holds a ton of weight in the AFC East on Sunday.

The Dolphins were the only team in the division to win their opener, knocking off the rival Patriots 17-16 on the road, while the Bills were stymied by the Steelers stop unit in a 23-16 defeat.

The NFL betting odds are giving a field goal to Miami, which has lost five straight meetings with Buffalo, going 2-3 ATS in that span.

Here are our free NFL picks and predictions for Bills at Dolphins on September 19.

The Week 2 odds opened with Buffalo -3.5 on Sunday night, but this spread slowly slid toward the underdog on Monday, eventually coming down a half-point to a field goal. Since then, the juice has juggled on both sides, with the Bills -3 priced as high as -125. The total for this AFC East rivalry opened around 48 points and has stayed relatively steady early in the week.

Buffalo is 8-2 SU and 6-4 ATS as a road favorite over the past four seasons. Find more NFL betting trends for Bills vs. Dolphins.

The Bills are a drastic shift in game plan for the Dolphins, who come off a matchup against a conservative New England attack run by a rookie quarterback.

Miami didn’t have to fear the deep ball too much in Week 1 but should be shaking in its cleats with a hungry Buffalo attack starved for points after being deprived by Pittsburgh’s elite defense in the opener.

The Bills outgained the Steelers 371-252 in total yards and dominated the football for 79 plays, but big sacks, a blocked punt, and a key takeaway from Pittsburgh’s defense kept Allen and the offense from running away in the second half.

Miami has a sound stop unit as well. However, it’s a high-risk/high reward defense that can create those game-changing plays, while also giving up the home run trying to make them. The Dolphins allowed 51 passing plays of 20-plus yards in 2020 (fifth-most) and tied for the most 40-plus passes given up with 12. Allen decimated the Fins in 2020 and needed only one and a half games to do so (played just first half in Week 17), boasting a passer rating of 136.7 with 639 yards, seven touchdowns and just one interception in two matchups with Miami.

The Dolphins could also get roughed up on the ground after allowing New England to run for 125 yards on 30 carries, which equated to 36:43 in TOP. The defensive line gave up bigger runs and wasn’t able to generate much pressure up front. If Buffalo RB Devin Singletary can pick up gains early on, that sets up this Bills offense to run play-action – something that fueled the No. 2 scoring attack in 2020.

Before we go overboard on the Bills’ scoring prowess, let’s acknowledge that since hanging a 56-spot on the Dolphins in Week 17, this offense has been ho-hum.

Granted, three of the last four games came in the playoffs, but Buffalo has managed to score a total of seven offensive touchdowns in that span – a serious downtick for a team that averaged more than 31 points per game in the 2020 regular season.

Opponents have more tape on this big-swinging playbook and have come to the realization that the Bills can be slowed by zone defense. Hopefully, for Fins fans, Brian Flores got the memo and implements more zone than he did in 2020 (55/45 split in man vs. zone).

Buffalo may have to look to its defense to get the job done in Week 2. The Bills limited the Steelers to 4.6 yards per play and checked them to 4 of 12 on third downs for the game. And while the pass rush produced two sacks and little else, that had more to do with Ben Roethlisberger’s hair-trigger passing game (2.3 seconds with the ball).

Miami’s offensive line isn’t that great and struggled to give the run game much room or give Tua time with the football in Week 1. He was sacked twice and finished 16 for 27 (59%) for 202 yards passing, one TD, and one INT. Tagovailoa was also contained on the ground as well, rushing four times for just one yard (with a three-yard TD).

The temperatures in Florida could also play a factor in this total. Sunday’s forecast is calling for game-time temps in the 90s and with the humidity hitting 66 percent, it’s expected to feel like 100 degrees. That’s fine for fans under that canopy over Hard Rock Stadium, but players will be swimming in the Sunshine State September soup.

Emmanuel Sanders got some solid run in his debut for the Bills. The veteran wide receiver played 79 snaps and was targeted eight times, catching four of those passes for 52 yards.

That workload bumps fellow WR Gabe Davis down the depth chart and flashes some solid value for Sanders in Week 2. He’s still a deep-ball threat and faces a Fins stop unit known for getting gashed for big plays.

Allen is itching to let it fly after being bottled up by Pittsburgh in Week 1 – averaging only five yards per attempt – and Sanders could find himself under those long bombs this Sunday. 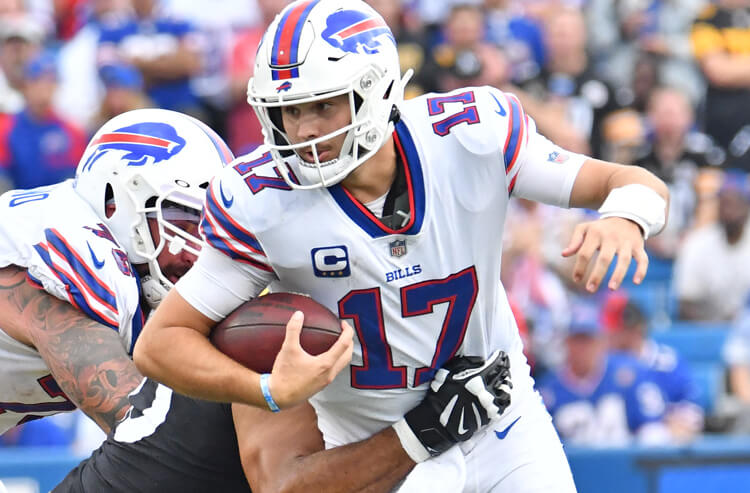 Bills vs Dolphins Week 2 Picks and Predictions: Can Fins Steer Themselves to 2-0?
Provided by