Penn State vs Michigan Picks and Predictions for November 28

If someone told you that Penn State and Michigan would meet six weeks into the Big Ten schedule, and that they would enter the game with a combined two wins, well, you might say that’s 2020 for you. Because that's exactly what we’re dealing with Saturday, as the 2-3 Wolverines are 2.5-point favorites against the winless Nittany Lions.

Let’s take a look at our best college football predictions for Penn State vs. Michigan, with kickoff scheduled for Saturday, November 28 at 12:00 ET at the Big House in Ann Arbor.

It is going to be a chilly, blustery day at the Big House. The forecast is calling for clear skies, but a cross-field wind of 12-13 miles per hour will have the temperatures feeling close to freezing at game time. Be sure to monitor the gametime conditions with our NCAA football weather info.

The Under is 5-0 in Penn State's last five games against a team with a losing record. Find more NCAA betting trends for Penn State vs. Michigan.

Yes, it has been a train wreck of a season for both Penn State and Michigan. Things have gone from bad to worse for Penn State since losing to Indiana in overtime in their opener. The Nittany Lions have lost their top two running backs, what was supposed to be a good defense is giving up 36 points per game, and they turn over the ball way too much.

Michigan, on the other hand, has at least notched two wins, but the losses have been ugly, and Jim Harbaugh's time at Michigan seems to be running out. The Wolverines lost to rival Michigan State as 21.5-point home favorites, then lost by a combined 55 points to Indiana and Wisconsin. Heck, they needed overtime to defeat Rutgers.

So, what’s a bettor to do with a pair of bad teams, that are a combined 1-9 ATS where the home team is favored by less than a field goal?

Well, for starters Penn State QB Sean Clifford will have the chance to put up some yards in this one. Clifford leads a Penn State passing attack that ranks 28th in the country in terms of yards per game, and they’ll be going up against a Michigan pass defense that has been just awful. The Wolverines rank 103rd in terms of pass yards allowed per game and haven’t gotten anything out of their pass rush.

Michigan, on the other hand, made a switch at quarterback last week going from Joe Milton to Cade McNamara. McNamara came in trailing Rutgers 17-0 and ended up throwing for 260 yards with four touchdowns and no interceptions.

But despite giving up all those points, the Penn State defense still ranks 36th in total yards allowed per game, and are almost equally good against the pass as they are the run. The problem for Michigan is whoever is under center, the Wolverines are too one-sided on offense. If Penn State can limit the turnovers (a big ask this season), they are a good bet to secure that first win of the season.

The total for this Big Ten battle is on the board at 58.5 as of Wednesday morning, and we’re here to tell you it may be a touch too high. First of all, these teams combine to score just 55.2 total points per game this season, and we’re not even sure they’ll get to that average in this one.

As mentioned, Penn State is allowing 36 points per contest, but that is due in large part to turnovers. Luckily, Michigan is one of the worst teams in the country when it comes to forcing turnovers. Additionally, when Penn State has had a total of 57.5 or higher this season, the Under is 2-1-1. Now, that may not seem impressive, but the Over would have stayed Under if not for overtime, and the push featured the Ohio State offense.

Meanwhile, Michigan may be averaging 30.6 points per game, but the bulk of those points came against defense-inept Rutgers and Minnesota. Against Michigan State, Indiana and Wisconsin, the Wolverines averaged just 18.7 points per game. This one should sneak Under the number.

Since a 21-point first quarter against Minnesota, the Wolverines totaled just 14 first-quarter points in their four games that followed. While the Nittany Lions have not been great when it comes to early scoring, they're providing us with some nice value when it comes being the first team to put points up on the board in this one. 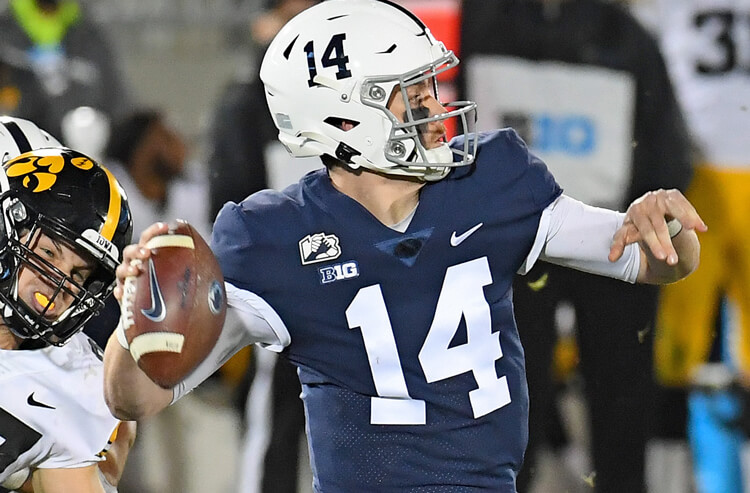