Sometimes the best thing about a road loss is that you’re not far from sleeping in your own bed. That’s how it was during my high school days in west Texas. Nobody enjoyed losing, but a trip to Dairy Queen and a quick bus ride home suddenly made things much better.

Oklahoma State surely felt the same way after a 41-13 loss to Oklahoma. The Cowboys didn’t come close to covering, but they were likely less concerned with college football betting and more focused on grabbing some Taco Bueno and getting back to Stillwater. And this week, they don’t have to go anywhere.

Here are our best college football free picks and predictions for Texas Tech at No. 22 Oklahoma State, with kickoff scheduled for Saturday, November 28 at 12:00 ET at Boone Pickens Stadium.

Expect a mixture of sunshine and showers on Saturday. We’ll see a high of 56 degrees with a 68 percent chance of rain. Wind will be out of the east-northeast at 4 mph. Be sure to monitor the gametime conditions with our NCAA football weather info.

Texas Tech hasn’t played since escaping with a 24-23 victory against Baylor two weeks ago. The Red Raiders have two quarterbacks who can play, and Red Raiders Head Coach Matt Wells admits that he’s going to go with whoever has the “hot hand.” That means we could likely see both Alan Bowman and Henry Colombi in Stillwater. The Red Raiders are averaging almost 29 points per game but are giving up 38 points per game on defense, as they also haven’t won back-to-back games all season.

As the Cowboys limp back to Stillwater, they may have quarterback issues of their own. Spencer Sanders left last Saturday’s game early against the Sooners before finally returning in the fourth quarter. If he’s not healthy enough, true freshman Shane Illingworth would be forced into action, though he’s already seen significant time this year. Combined they’ve thrown for nine touchdowns and five interceptions this season while leaning on a running game that averages almost 175 yards a game—led by the tandem of Chuba Hubbard and LD Brown.

Upon first glance, this seems like far too many points for the Cowboys to lay, but the Red Raiders are a completely different offense away from home, where they average only 18 points per game. Tech is 1-5 in its last six road games against teams with a winning record.

Oklahoma State likes to win games with defense and by leaning on its talented backfield, which should slow the pace. Couple that with a Texas Tech offense that tends to short-circuit on the road and the Under is the play.

You wouldn’t know it based on their disappointing performance against the Sooners, but the Cowboys have the best third-down defense in the country.

Oklahoma State should return to form in Stillwater and those Beef Muchachos will taste better than normal after suffocating the Texas Tech offense.

Did you know that if you parlayed today’s NCAA Texas Tech vs. Oklahoma State picks, you could win $48.81 on a $10 bet? 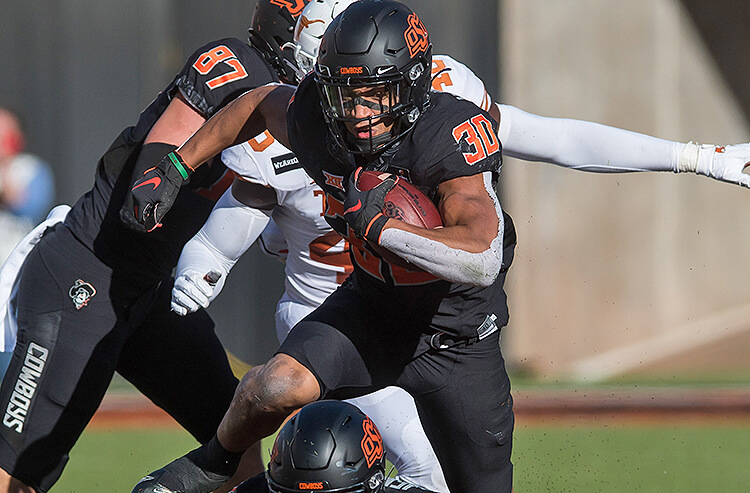