Nebraska vs Iowa Picks and Predictions for November 27

Since it’s Thanksgiving, many people are likely thankful for Nebraska being one of the biggest proponents for bringing back Big Ten football in 2020. But the Cornhuskers might not be so thankful themselves.

Nebraska heads into Friday’s matchup against the Iowa Hawkeyes with just one win in its first four games and is coming off an embarrassing loss to Illinois. Oddsmakers think the Cornhuskers’ troubles could continue, setting them as two-touchdown underdogs.

Let’s take a look at our best college football predictions for Nebraska vs. Iowa, with kickoff scheduled for Friday, November 27 at 1:00 ET.

It could be a chilly Black Friday in Iowa City. The forecast is calling for clear skies but temperatures could feel around freezing with a 10 mile per hour wind coming from the northwest. Be sure to monitor the gametime conditions with our NCAA football weather info.

Nebraska is 1-7 ATS in its last eight games against a team with a winning record, and 1-6 ATS in its last seven games on the road. Find more NCAA betting trends for Nebraska vs. Iowa.

Yes, the return to playing has not gone overly well for Nebraska so far this season, and after last week’s ugly loss to Illinois in which the Cornhuskers had five turnovers, there are even more questions around the quarterback position.

Luke McCaffrey replaced Adrian Martinez as the starting quarterback two games ago and led the Huskers to a win over Penn State, but things did not go well against the Fighting Illini. McCaffrey went 15-26 with no touchdowns and three picks. Then Martinez came in and threw a garbage-time touchdown. So, it will be interesting to see who head coach Scott Frost starts under center in this one.

But no matter who gets the start, they’ll have a tough time against the Iowa defense. The Hawkeyes rank 17th in total yards allowed per game, including 39th against the pass, and are giving up just 16 points per contest.

On offense, the Hawkeyes are led by a run game headed up by Mekhi Sargent and Tyler Goodson. They’ll face a Nebraska defense that is giving up 223.3 rushing yards per game. QB Spencer Petras has been inconsistent, but if he can pick his spots properly, he can be effective.

This Iowa team has depth and talent, and if the Hawkeyes can get some steady quarterback play out of Petras, they should be able to cover this spread. Fade Nebraska.

Nebraska just allowed Illinois to run for 285 yards last week, and the Huskers will have their hands full with an Iowa squad that is on fire right now. The Hawkeyes have put up 41.7 points per game over the last three games and have another good matchup against a struggling Nebraska defense.

Scoring has been a problem for Nebraska this season, with the Cornhuskers tallying just 20.8 points per game this season, but that should be just enough to get this one Over the total.

While Nebraska doesn’t do a whole lot of scoring, it usually isn’t until the second half when the wheels fall off. Yes, the Huskers average 16 of their 20.8 points in the first half of games this season but Iowa, on the other hand, has averaged over 24 first-half points per game over the last three weeks. Bet on the first half to see a fair amount of points in this one. 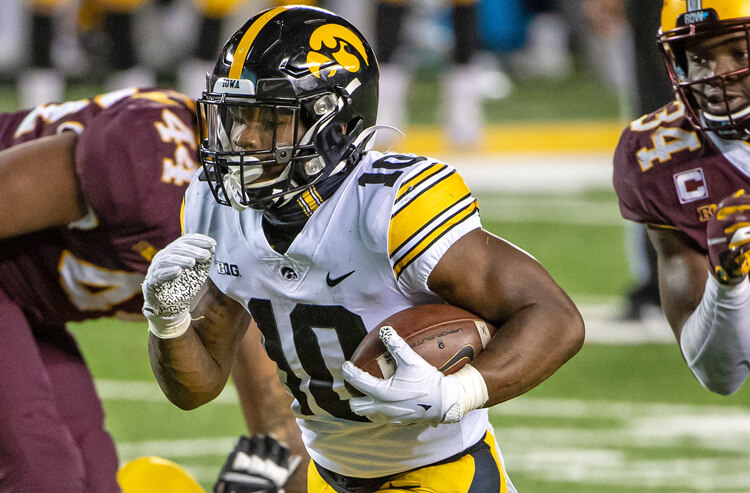 Nebraska vs Iowa Picks and Predictions for November 27
Provided by