With a healthy offensive line and a penchant for running, the Arkansas Razorbacks seemed prime to come away with a win over Penn State. At least that's what our Outback Bowl betting picks think — read more to see why.

You should enjoy your New Year’s Eve — you’ve earned it — but do not do so to the extent that you miss the first kick on the New Year’s Day college football bowl slate.

This early afternoon appetizer has a knack for being an entertaining game, in no small part because it usually involves two talented teams looking to make the most of the national spotlight... and Arkansas and Penn State meet that exact definition.

Here are our free college football picks and predictions for Arkansas vs. Penn State in the Outback Bowl on Saturday, January 1, with kickoff set for 12:00 p.m. ET.

This line has not yet jumped the fence, but it has trended that way since opening with Penn State favored by a field goal. The total has since shifted all the way to Arkansas -3 on January 1. Along with that, the total has moved up, from opening at 46.0 to 49, never having the mid-month blip that the spread did.

If you're signing up for a new sportsbook for the Outback Bowl, here are two of the best welcome bonuses available:

When this line opened, there was some wonder if the Nittany Lions would get to enjoy quarterback Sean Clifford on New Year’s Day. Within the week, he not only announced he would play in the Outback Bowl, but he will also return to Penn State next season. Yet, this line fell in Arkansas’ direction.

The Razorbacks struggled with injuries to close the season, most notably along their offensive line. In October in particular, those injuries derailed the Arkansas offense, leading to a 38-23 loss against Auburn and a 31-28 squeaker against Mississippi State to start November.

While the Razorbacks passing offense is more efficient than its running game — averaging 7.89 yards per pass attempt compared to 5.5 yards per rush attempt (both sacks adjusted) — they prefer to rush much, much more often than throw. Arkansas ran the ball 505 times (again, sacks adjusted), while it dropped back to pass 319 times this year.

A beat-up offensive line did not help with that preference.

Now, go back a couple of sections and check the Razorbacks injury report. Guess who is healthy: That offensive line.

Meanwhile, Penn State will have to finish the season without defensive tackle PJ Mustipher, and since he was injured at Iowa in early October, the Nittany Lions have plodded to a 2-4 record, including 3-3 ATS. Those two outright wins came against Maryland and Rutgers — hardly inspiring confidence.

There is no reason to default to the Under when hearing Arkansas will focus on the running game. An effective offense is an effective offense, and if the Razorbacks can run through Penn State a time or two early, they may defeat the Nittany Lions mentally enough to truly chew up that defense late.

That alone inspires enough belief to encourage the Over, given this moderate total. Furthermore, bowl seasons are built for Overs.

Of this year’s first 14 bowl games, nine of them would have cruised past this total. Those are obviously different games, but the point stands: Points tend to come during the season built for presents.

There is a real want to encourage taking the Arkansas money line at about +105. The first draft of this handicap argued as much. But there is reason not to... and that reason is the same reason that points tend to come during bowl season, that bowls get wacky, and that these exhibitions can be so much fun.

They don’t mean anything, so head coaches get a bit gutsier, and Razorbacks head coach Sam Pittman has already shown that penchant in normal times.

Remember that dramatic and absurd 52-51 shootout defeat at Mississippi in early October (coincidentally the same weekend that Penn State’s season began to fall apart with that second-half collapse at Iowa)? Arkansas lost when a two-point conversion attempt to end the game failed.

If given that chance in a bowl game, there is no doubt Pittman would go for two again. Why chase overtime in an exhibition game in Tampa Bay?

If granting the vague premise that a two-point conversion attempt has a 50 percent success rate, the roughly 13 percent difference in ROI of choosing the money line compared to the spread is not worth the risk. Losing the money line because a KJ Jefferson pass falls incomplete with zeroes on the clock would be maddening.

Stumbling into a push in that moment would hardly be a winning feeling, but it would be better than that alternative. 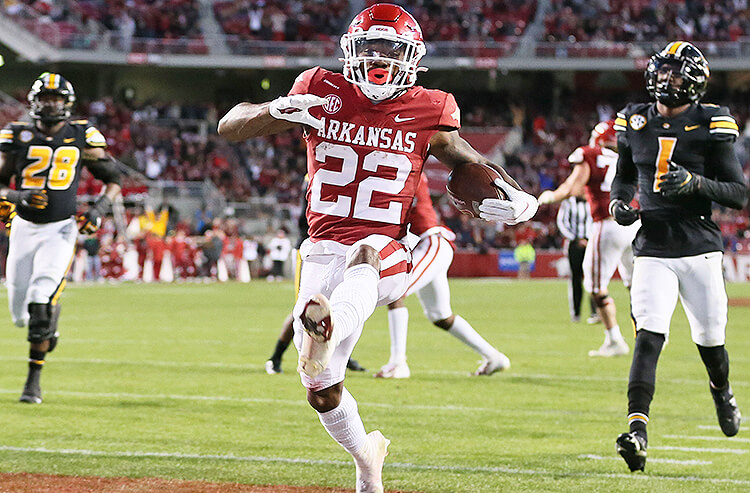