Without their No. 1 offensive weapon Tyler Goodson, the Iowa Hawkeyes are all but doomed offensively — which is why we're all in on Kentucky to take advantage. Read more in our Citrus Bowl betting picks and predictions.

Kentucky coach Mark Stoops leads his team against Iowa — for whom he was a walk-on defensive back and grad assistant — in the 2021 Citrus Bowl.

Both teams have similar stories of early success and late-season struggles. Kentucky started the season 6-0 before dropping three straight. Iowa was ranked as high as No. 2 in the nation in mid-October but enters with wounded pride after a 42-3 beatdown loss to Michigan in the Big Ten Championship game.

Which team will finish the season on a high note in the Citrus Bowl?

Check out our picks and predictions for the 2021 Citrus Bowl between the Kentucky Wildcats and the Iowa Hawkeyes on Saturday, January 1, to find out.

If you're signing up for a new sportsbook for the Citrus Bowl, here are two of the best welcome bonuses available:

The Wildcats are 10-2 ATS in their last 12 non-conference games. Find more NCAA betting trends for Iowa vs. Kentucky.

Iowa vs Kentucky picks and predictions

Unless a slew of opt-out news comes out following the writing of this piece, both teams appear to be entering the Citrus Bowl with relatively few missing pieces. Iowa will be without its No. 1 offensive weapon in Tyler Goodson, while Kentucky will be without receivers Josh Ali and Isaiah Epps. Goodson, a two-time All-Big Ten honoree, is the most impactful loss, as Iowa has been dreadful offensively all season and may struggle to replicate his production.

Both teams usually operate with a similar brand of football centered around a solid defense, a good offensive line, and a power running game. The key difference this season is that Kentucky has successfully implemented the offensive line and running game factors in that equation, while Iowa has not. The Hawkeyes have a 36% success rate on the season, while the Wildcats sit at 50% — a stark contrast and a clear indicator of why we will be betting the SEC side of things in the Citrus Bowl.

Iowa quarterback Spencer Petras is listed as the starter on the team’s depth chart despite leaving the Big Ten Championship game early. We don’t think it makes much of a difference who is under center — the offense will be bad either way. Opponents held Iowa to only 4.6 yards per play on the season and 297.7 total yards per game.

Kentucky’s offense gives them the edge. The Wildcats have the second-best offensive line grading at PFF, led by two terrific players in center Luke Fortner and right tackle Darian Kinnard. Louisville transfer Wan’Dale Robinson has been a revelation at wide receiver, finishing the year with 94 receptions for 1,164 yards and seven touchdowns. He’ll be the best offensive weapon on the field and gives the Wildcats an explosive element that Iowa simply doesn’t have.

It really hurts to recommend an Under with a total this low, but that’s the only way we can look after evaluating the matchups. Iowa has been miserable offensively, ranking 123rd in the FBS in yards per game. Kentucky is allowing only 22.1 points per game and ranks 26th in yards allowed. Iowa will be missing its best player in Goodson and could struggle to put points on the board. Watch for Kentucky star Joshua Paschal (15.5 TFL, six sacks) to cause havoc up front against an up-and-down Iowa offensive line.

While Kentucky will likely hit a few big plays and be more successful moving the chains, we don’t expect them to put a huge number on the scoreboard either. Kentucky has scored all season long, except with one big disclaimer — the Wildcats have struggled against good rushing defenses. Georgia and Mississippi State were able to keep Kentucky to 13 and 17 points, respectively, by limiting the running game. Iowa’s 15th-ranked rushing defense should keep the Wildcats in check. The Hawkeyes have allowed only 3.2 yards per rush this season and have been stingy all season outside of the Big Ten Championship fiasco.

We like the Kentucky side in the Citrus Bowl. The line is likely going to continue to head in that direction, but there are still some juiced -2.5 lines available at the time of this writing.

We’d grab that before it moves. Kentucky’ possesses a significant offensive advantage and will enter hungry to finish the season strongly under Mark Stoops. 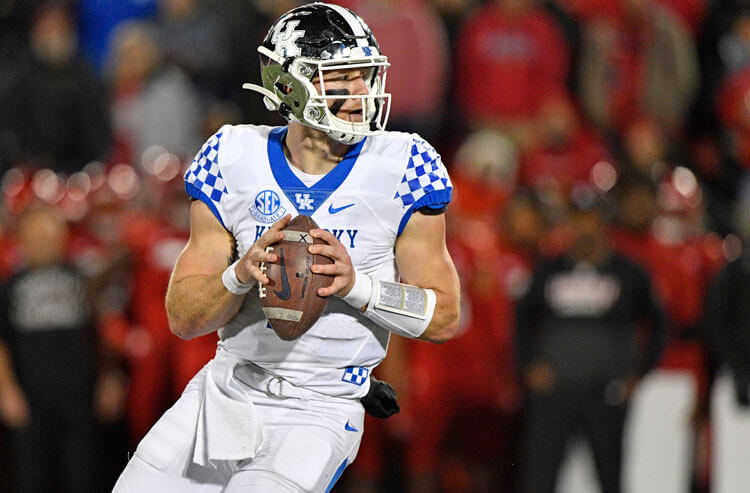