The Cincinnati Bearcats have been undervalued all season despite consistently surpassing expectations, and their status as 13.5-point underdogs against Alabama in the Cotton Bowl affirms it. The Tide may win, but our betting picks predict a closer game. 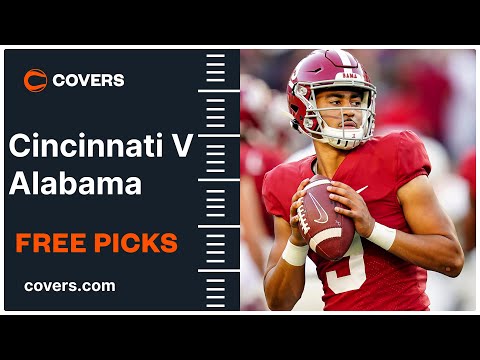 The Bearcats made history this year, becoming the first-ever Group of Five team to qualify for the College Football Playoff. Their reward? A CFP semifinal matchup with the most dominant team in college football over the last decade and a half, the Crimson Tide.

This year’s edition of the Crimson Tide features Heisman-winning quarterback Bryce Young and is coming off an impressive upset of Georgia in the SEC Championship. But are the Bearcats live dogs getting 13.5-points?

Here are our free college football betting picks and predictions for Cincinnati vs. Alabama on December 31.

Alabama opened this CFP semifinal matchup favored by two touchdowns back on Dec. 5 and was almost immediately bet down to 13.5 where the number has stayed put ever since. The total hit the board at 58 and has stuck around the opening number.

If you're signing up for a new sportsbook for the Cotton Bowl, here are two of the best welcome bonuses available:

The Bearcats are 5-0 against the spread in their last five games as an underdog. Find more NCAA betting trends for Cincinnati vs. Alabama.

Cincinnati vs Alabama picks and predictions

Alabama returns to the College Football Playoff for the seventh time in the format’s eight-year existence after a dominating performance against rival Georgia in the SEC Championship, thumping the Bulldogs 41-24 as 6-point underdogs thanks to a huge game from Heisman winner Bryce Young.

The Bama quarterback was sensational in picking apart a Georgia defense that was being heralded by many as one of the best ever. Young capped off his fantastic season by throwing for 421 yards with three touchdowns and no picks.

Meanwhile, Cincinnati capped off its perfect regular season by taking care of business in the AAC Championship against Houston, covering the 10.5-point spread in a 35-20 victory. The Bearcats got here thanks to a season that included a huge win over Notre Dame and while they are underdogs, they will pose a problem from the Crimson Tide.

Cincy quarterback Desmond Ridder is one of the best quarterbacks in the country. He is a true dual-threat, throwing for 3,190 yards with 30 TDs compared to eight picks while adding another 361 yards and six scores on the ground.

Ridder is complemented by running back Jerome Ford, who rushed for 1,238 yards at 6.2 yards per carry with 19 touchdowns.

While Cincinnati might not get the same recruits as Bama and others in the SEC, they are exactly the type of team that has caused the Tide problems this season: physical teams that can do battle in the trenches. Bama struggled with teams like Auburn, LSU, Texas A&M, and Florida and went 0-4 ATS in those matchups.

Alabama’s offense was inconsistent in each of those matchups and had issues running the ball, making the team’s play-calling one-sided, allowing opposing teams to focus on the pass.

That said, if Bryce Young plays the way he did against Georgia, Alabama will win this one running away. It hurts that Young won’t have John Metchie III to throw to after the wideout tore his ACL in the SEC Championship. He does still have Jameson Williams, though.

But if Cincy gets down, unlike Georgia (sorry Stetson Bennett) they have a quarterback who can attack the Bama secondary and keep them in the game.

When looking at the total for this CFP semifinal, the number might seem a little low considering these teams combine to score more than 80 points per game. But this game features two defenses that can really play.

Even though Cincy didn’t play against top-end talent each week, this defense is good. They have a strong defensive front and Jim Thorpe award winner Coby Bryant, whose job it will be to shut down Jameson Williams.

This is the best defense the Bearcats have faced since their trip to South Bend to take on Notre Dame earlier in the season. They scored just 24 points in a game that fell well below the total.

While many are expecting another CFP semifinal blowout (the history is not pretty), you can’t deny that oddsmakers are giving the Bearcats plenty of respect, even with a line of 13.5. Teams like Mississippi (-15), Texas A&M (-18.5), LSU (-29.5), and Auburn (-20.5) were all bigger underdogs this season.

Alabama is capable of incredible performances like we saw in the SEC title game, but they have played an inconsistent brand of football far too often this season and that type of uneven performance will keep this game competitive against a Cincinnati team that is balanced and disciplined, and frankly more talented than some would like to admit.

Cincinnati vs Alabama Cotton Bowl Odds, Picks and Predictions: Put Some Respect on Bearcats
Provided by