Oklahoma State vs Notre Dame Fiesta Bowl Odds, Picks and Predictions: Points Will Be At A Premium

Both Oklahoma State and Notre Dame came oh so close to being involved in the College Football Playoff, but have to settle for a Fiesta Bowl appearance. Our college football betting picks are siding with the Irish for this game — read more to find out why.

Instead, they have to make do with complementary PlayStation 5s and a few days in the sunshine of the southwest.

That may not be ideal for the Oklahoma State Cowboys and Notre Dame Fighting Irish, but it could be far worse — and college football betting fans aren't complaining.

Here are our free college football picks and predictions for Oklahoma State vs. Notre Dame in the Fiesta Bowl on Saturday, January 1, with kickoff set for 1:00 p.m. ET.

Once those final Playoff rankings neglected both these teams, Notre Dame opened as a 2.5-point favorite, a number that has bounced between -2.0 and -2.5 the last few weeks, spending more time at the smaller number before ultimately reaching -1.0 on gameday. The total has been just as constant, opening at 45.0 before ticking upward to and remaining at 45.5.

If you're signing up for a new sportsbook for the Fiesta Bowl, here are two of the best welcome bonuses available:

It has been a bit of a month for the Irish. They reached 11 wins and the precipice of the Playoff with a win at Stanford on Nov. 27... and two days later head coach Brian Kelly abruptly left to take the lead gig at LSU. Within 48 hours of that shocking news, Notre Dame had promoted defensive coordinator Marcus Freeman — not to interim head coach, but to the head coach.

And that is why the suggestion is to stick with the Irish here. Somehow, in all that chaos, they found continuity and freshness that every other bowl team should envy.

This time of year is marked by opt-outs, motivational doubts and — for the second year in a row — COVID outbreak concerns. Notre Dame suffered a major opt-out in junior running back Kyren Williams and the outbreak concern cannot be overlooked in any locker room, as Texas A&M and Hawaii have made abundantly clear. But the Irish have no questions about motivation with a new head coach eliciting roars from the locker room when he was first introduced.

Oklahoma State, meanwhile, may also be without its primary running back in Jaylen Warren — who is reportedly on track to play in the Fiesta Bowl, although he missed the Big 12 championship game due to injury — that was kept rather quiet until game day.

The Cowboys have to mentally recover from coming inches away from a massive Playoff debate. And, real or not, rumors about head coach Mike Gundy trying to land the Florida job last month have persisted enough they must have seeped into that locker room a bit.

Freeman’s tenure at Notre Dame may or may not find success. All coaching hires are rolls of the dice, anyway. But taking over from within the program in the buildup to a New Year’s Day bowl, while keeping almost all of the rest of the coaching staff intact, may have been an ideal breath of fresh air for the Irish before heading to Arizona.

Here is the dirty little secret about the seven-game Irish winning streak, both straight up and ATS: They did not play a single worthwhile defense. There is no single defensive stat to prove this unilaterally, but looking through a couple quickly makes it clear.

Five of those seven opponents rank lower than No. 100 in points per game allowed. The highest among them, Virginia Tech, ranks No. 39. Using a more advanced metric, four of them rank No. 111 or lower in defensive expected points added (EPA) per play against, per cfb-graphs.com, with the Hokies again the highest-ranked, down at No. 70.

Oklahoma State ranks No. 7 (16.8 points per game) and No. 3 in those respective markers. Notre Dame improved in the second half of the season but it never played a defense like the Cowboys.

The same can be said of what Oklahoma State faced much of this season, though not as drastically. Of the other Big 12 teams, Baylor ranks highest in points per game against at No. 14 (19.2 ppg) with Iowa State not far behind at No. 21. Those two also lead the way in defensive EPA per play, at Nos. 22 and 43, respectively.

These offenses gave the impression they are not slouches this season, but they largely did so against paltry defenses. That changes on New Year’s Day.

The lack of proven running backs, a defensive coordinator-turned-head coach in charge of game decisions for the first time, and two excellent defenses all argue for this Under.

They argue for it strongly.

It is hard to imagine either offense finding a rhythm to an extent it can score multiple possessions in a row. A few turnovers would further cement this look at the Under.

But just because this should be low-scoring... does not mean it will not be entertaining. 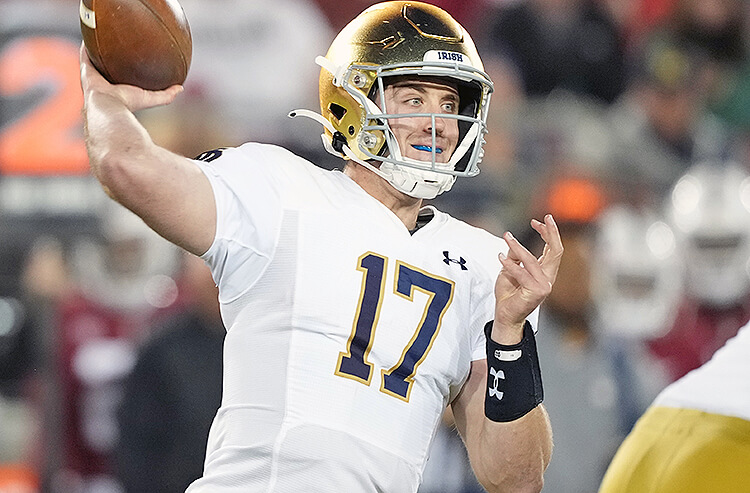 Oklahoma State vs Notre Dame Fiesta Bowl Odds, Picks and Predictions: Points Will Be At A Premium
Provided by