The Bruins are looking to rebound from a rough 2020 campaign, and return a strong offense. But the Rainbow Warriors have lots of room to work within a huge spread, against a team that usually starts slow. Find out who to back with our Hawaii vs UCLA picks.

The Hawaii Rainbow Warriors travel to the Rose Bowl to take on the UCLA Bruins for the first game of their college football betting season. The Rainbow Warriors surprisingly showed off solid defense last year and expect it to be stronger behind Todd Graham, who impressed in his first year as head coach for Hawaii.

UCLA, on the other hand, is loaded with talent on the offensive end. Dorian Thompson-Robinson will still run the show at quarterback with a strong group of receivers flanking him.

Check out our Hawaii vs. UCLA picks and predictions for Saturday, August 28.

[Info]. Be sure to monitor the gametime conditions with our NCAA football weather info.

We can’t underestimate UCLA. Last year, the Bruins had a couple of very tough losses. They took a 48-47 loss to Stanford in double overtime, they took a 43-38 loss to 15-seeded USC and lost 38-35 to Oregon on the road, who was ranked 11 at the time.

But UCLA is no longer an underdog. They’re not supposed to keep this game close. They’re supposed to win this game, and win by a lot. The Bruins will return a veteran offensive line and that should help the offense click from the get-go.

The defense wasn’t the best last year either. They gave up 48 points to Colorado, 38 to Oregon, 43 to USC, and 48 (in double overtime) to Stanford. That won’t get the job done. However, on paper, the UCLA defense looks much better this year. They lost a couple of personnel but have players that can press and keep Hawaii honest.

The UCLA defense finished the season showing off a fantastic secondary that secured nine interceptions in seven games. If that secondary continues to show up, Hawaii’s going to have some trouble moving the ball down the field.

On the other hand, the Rainbow Warriors will return a boatload of starters as well, and should be more balanced on offense this season. What’s going to be more important is their defense. Hawaii is returning nearly all of their leading tacklers from last season. This is a group that has speed and can get enough pressure on the quarterback to force turnovers.

With that, I’d like to point out that UCLA’s going to be fine this season. They’ll be competitive against the Pac-12 and should be able to find a way to defeat Hawaii in the first game of the season. Thompson-Robinson didn’t get as many reps in practice as he would’ve liked due to being suspended for undisclosed reasons. It sounds like maybe he’s not the best guy to lead a football team.

The reality is, UCLA has won just once in the last five season openers. They’re never prepared to start the season. Last year, they took a bad loss to Colorado, allowing 48 points.

I like the Rainbow Warriors to give the Bruins a fight and at least cover the spread.

The total seems to be underrating a Hawaii defense that allowed just 14 points to Houston in the New Mexico Bowl, conceding just 58 rushing yards and 249 yards passing all game. They forced three interceptions and really didn’t commit any silly penalties all game on the defensive end.

If Hawaii gets a couple stops early, they’re going to want to slow the tempo down, given that they’ll have a chance to win this football game.

UCLA has plenty of weapons on offense, but it takes two teams to tango. Hawaii's defense is good enough to get stops, and while UCLA looked like Swiss cheese in their losses, Chevan Cordeiro of Hawaii isn’t exactly a premier quarterback. He completed 62.3 percent of passes last year, but in a full season during his sophomore year, completed just 57.5 percent of passes.

For my first college football Over/Under pick of the season, give me the Under 68 in this match-up. 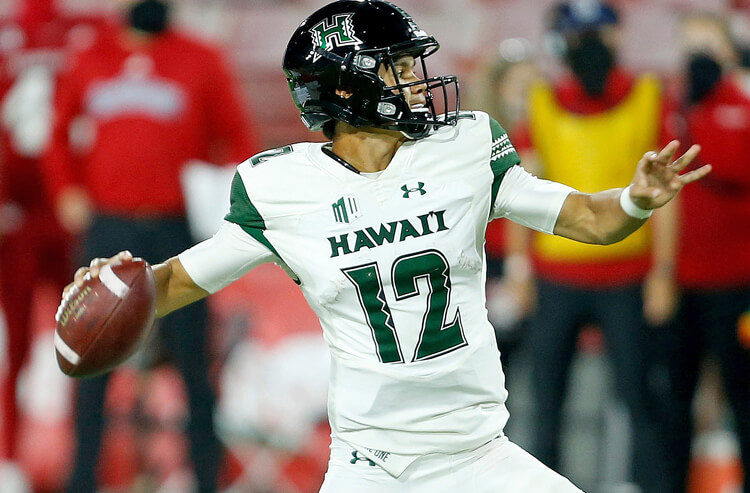