San Jose State shocked the college football betting world last season. They're out to prove it was no fluke, and open the season with a huge spread against an FCS foe. Check out our Southern Utah vs San Jose State picks to see if they can get the job done.

The San Jose State Spartans shocked the college football world last season when they marched to a 7-1 record and upset the Boise State Broncos to win the Mountain West, their first conference title since 1984.

The Spartans were also one of the best bets in the country, going 6-1-1 ATS. However, they were never 22-point favorites last season, which is exactly the chalk they will be laying against FCS Southern Utah.

Cans SJSU cover the big spread? Check out our college football betting free picks and predictions for Southern Utah vs. San Jose State on Saturday, August 28, and find out.

San Jose State surprised everyone by going a perfect 7-0 in conference play last season on its way to the Mountain West crown, not to mention 6-0-1 ATS before falling to Ball State as favorites in the Arizona Bowl.

But now the Spartans will want to prove last year was no fluke and have a good chance to do so as they are the third-favorite to defend their title at +500. SJSU loses its top two receivers in Tre Walker and Bailey Gaither but all other nine starters on offense return, including starting quarterback Nick Starkel.

The former Texas A&M and Arkansas transfer had a great season in 2020, throwing for 2,174 yards on 64.2 percent completion with 17 touchdowns to seven interceptions.

The Spartans face a Southern Utah team that was probably better than its 1-5 record this spring. All five of the Thunderbirds' losses came by eight points or less, but the team still has plenty of room for improvement.

Southern Utah relies on the passing game for success, led by quarterback Justin Miller, but the T-birds can get one-dimensional on offense. As a result, Southern Utah ranked fifth in the Big Sky (of eight teams) in scoring offense, and seventh in total offense.

The defense is led by linebacker La’akea Kaho’ohanohano-Davis, but the unit lacks depth and will have trouble holding down Starkel and a Spartans offense that averaged 30.9 points per game in the regular season last year.

Expect SJSU to use this game to get all the kinks out, and not let up, before a big Week 2 meeting against USC. It may be a lot of chalk but we’re laying the points.

When it comes to the total, my gut reaction says 56.5 is a touch too high for this FBS-FCS matchup. The Spartans should do their part to put up points, but it may be asking too much of the T-birds if you are expecting this one to go Over the number.

The Spartans return 10 players on a defense that allowed just 17.9 points per game in conference play last season. SJSU should also have one of the fiercest defensive lines in the Mountain West after ranking second in the conference in sacks.

So, SJSU shouldn’t have a problem limiting a one-dimensional Southern Utah offense that ranked fifth in the Big Sky in scoring. Bet this one to sneak below the number. 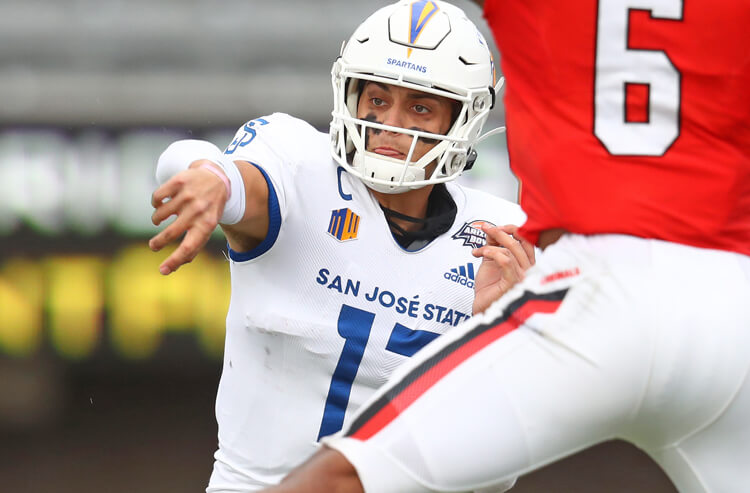