UConn vs Fresno State Picks and Predictions: Started From the Bottom

The Huskies are hoping to make strides out of the FBS basement this season, but they'll be in tough in their opener. Find out why the Bulldogs aren't likely to play nice as we break down this Week 0 matchup with our UConn vs Fresno State picks.

The 2021 college football betting season kicks off this weekend with a handful of Week 0 matchups. One of the early afternoon offerings brings us the Connecticut Huskies against the Fresno State Bulldogs.

After UConn opted out of the 2020 season, Saturday will mark the first time that the Huskies have played a snap in a live game in 638 days.

Vegas doesn’t expect this one to stay close for long, with the Bulldogs listed as 27.5-point favorites. Here are our free UConn vs Fresno State college football picks and predictions for Saturday, August 28.

Fresno State has been good to bettors in their opening game of the season, covering four of their last five Week 1 contests. UConn, meanwhile, has struggled out of their gate, going 1-6 ATS in their last 7 opening games. Find more NCAA betting trends for UConn vs. Fresno State.

Fresno State is looking to make its name known as a dark horse in the Mountain West. They return 20 starters to a team that finished 3-3 last year, but led the conference in total offense and passing offense.

Head coach Kalen DeBoer is back for his second stint as Head Coach and is hoping for the ever sought-after second-year “leap”. Before that, he had successful stints as the team’s OC and also as Indiana’s OC.

Quarterback Jake Haener, a former Washington transfer, led the Mountain West in passing last season with 336.8 yards per game. He teams up with arguably the deepest receiving corps in the conference and star running back Ronnie Rivers, who is on the verge of rewriting the school record book in a number of categories.

UConn was last seen in 2019, when their porous defense allowed opponents to compile a whopping 40.5 points per game. After losing a number of contributors to the unit through transfer and graduation, the secondary appears to be especially vulnerable. This poses a key problem against a dangerous Fresno passing attack.

The 2021 season will mark the Huskies’ first as an Independent. They return only 15 starters from the 2019 season and lost a slew of key players through the transfer portal.

Head Coach Randy Edsall will need the Huskies to show progress as a program this season after posting a 6-30 record in his second stint with the team. They have a number of winnable games on the schedule, but this does not appear to be one of them.

This matchup features a dichotomy of two teams heading in opposite directions. Fresno is hoping for a surge under DeBoer and returns nearly every key contributor to a high-powered offense. UConn’s goal for the season, meanwhile, appears to be building enough momentum to rise out of the basement of the FBS ranks.

It’s difficult to take the points with UConn until they show some life as a program. We’ll lay the points with Fresno, knowing that they’ll just need to hold up defensively to get the job done for bettors.

The high-powered Fresno State offense averaged 35.6 points per game over their final five games of 2020, all against better defenses than UConn. We should expect them to hold up their end of the bargain and move the ball effectively through the air.

The issue with looking at the game total for both teams is that UConn – a run-first offense playing from behind in their first game in almost two calendar years – is hard to rely on to score their fair share of points. For that reason, we’ll target the Bulldogs to go over their team total of 44.5 points. 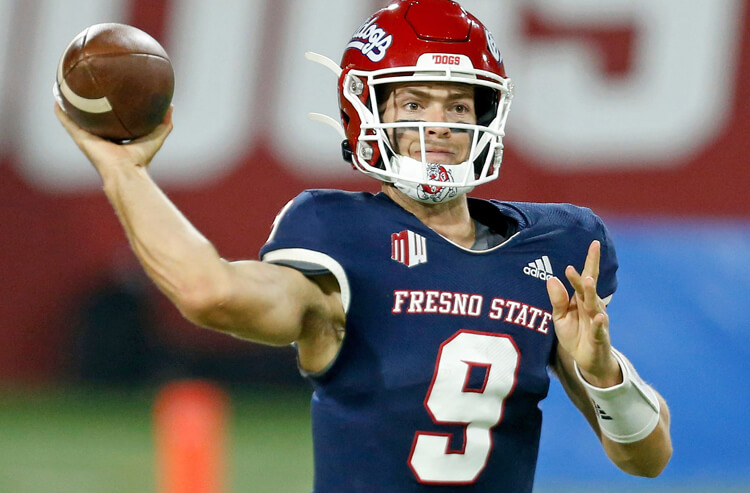 UConn vs Fresno State Picks and Predictions: Started From the Bottom
Provided by