Nebraska vs Illinois Picks and Predictions: Rising Illini Have Us Fading The Huskers In Week 0

We waste little time getting our first #FadeNebraska of the season, as the Huskers travel to Champaign to face an Illinois program trending in the right direction. The heat is on Nebraska coach Scott Frost — and we don't see him cooling it down this week.

The 2021 college football season kicks off with a Big Ten battle as Nebraska will face off against Illinois in what is arguably the biggest game of the Week 0 matchups.

This is a matchup of teams that have had their fair share of struggles recently, but surprisingly, it may be the Illini who are on the upward trend. Scott Frost was already on thin ice before the Cornhuskers were named in some incoming NCAA sanctions — can they put those distractions aside and cover the 7-point chalk?

Check out our college football betting free picks and predictions for Nebraska vs. Illinois on Saturday, August 28 and find out.

Nebraska is 5-11 ATS when favored with Scott Frost as head coach. Find more NCAA betting trends for Nebraska vs. Illinois.

It is Year 4 of the Scott Frost era in Nebraska and the results have been, well, underwhelming to this point. The Cornhuskers are just 12-20 SU over Frost’s first three seasons in Lincoln and the vultures are circling with the news of NCAA sanctions coming against the program.

So, the best thing Frost can do for his job security is win football games. But that might be easier said than done.

This Nebraska team will rely heavily on the performance of Adrian Martinez. The junior quarterback has never been able to put it all together, as he consistently battles his accuracy against good teams, and while he has 22 rushing touchdowns... he also has 32 fumbles.

Additionally, while the Huskers return 10 starters on defense, there is still plenty of room for improvement after allowing 29.4 points per game a season ago.

Illinois has 18 returning starters, so new head coach Bret Bielema is not calling this a rebuilding year. Plus the Illini should have strong QB play with senior Brandon Peters back under center.

A much-improved Illinois edge rush and linebacking corps should force Martinez to throw the ball down the field — something that varies in success from game to game for the Huskers signal-caller.

We’re taking the points with the Illini in our first #FadeNebraska of the season.

My gut reaction to the total of 55, is that it is a touch too high. Yes, Illinois ran away with the matchup last year in a game that saw 64 total points but this one shouldn’t be a laugher like that.

For starters, both teams should have solid running games this season. Martinez and running back Markese Stepp should provide a decent one-two punch for a Nebraska backfield that ranked second in the Big Ten in rushing a season ago.

Meanwhile, the Illini will lean on sophomore running back Chase Brown, who could be one of the best backs in the conference this season and will be behind a veteran o-line that is returning four starters — and should include multiple NFL draft picks.

So, solid running games, two improved defenses, and on top of that, the intensity of this game should be high. Nebraska and Frost desperately need a win, while Bielema will want to make a statement in his first game and prove this is not a normal rebuild. Bet on the Under in this one. 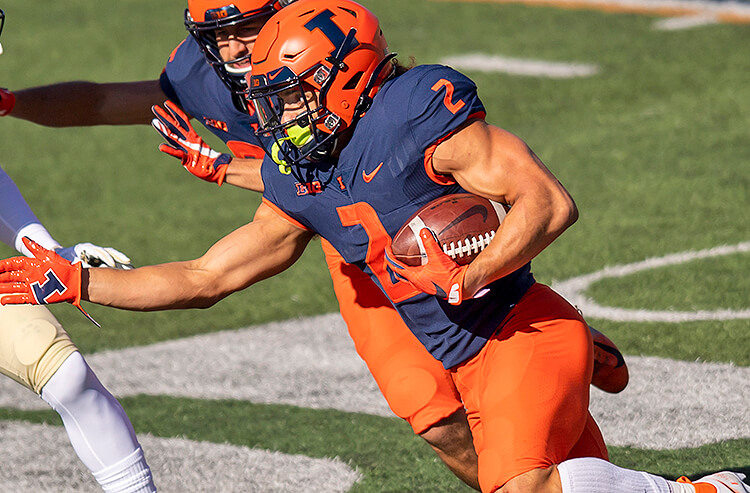 Nebraska vs Illinois Picks and Predictions: Rising Illini Have Us Fading The Huskers In Week 0
Provided by