Tulane vs Tulsa picks and predictions for November 19

While most conversations surrounding AAC college football start and stop with Cincinnati, the Tulsa Golden Hurricane want you to know they’re still here.

Tulsa sits in second place in the AAC at 4-0 SU (3-1 ATS) in conference play and will look to keep pace with Cincy when they welcome the Tulane Green Wave to town Thursday. Oddsmakers expect them to do so, as the Hurricane are laying 6.5 points of chalk.

Let’s take a look at our best college football predictions for Tulane vs. Tulsa, with kickoff scheduled for Thursday, November 19 at 7:30 ET.

Tulsa’s logo will certainly be relevant for this matchup. The forecast is calling for winds in the 20-30 mile per hour range blowing towards the northern endzone, with higher wind gusts possible. We will also have mostly clear skies with temperatures in the mid-60s. Be sure to monitor the gametime conditions with our NCAA football weather info.

The favorite has been the side to back in this matchup, going 13-2 ATS in the last 15 meetings. Find more NCAA betting trends for Tulane vs. Tulsa.

Tulsa has certainly surprised some with its play so far this year. The Golden Hurricane’s conference record includes wins over UCF – a game in which they were 20.5-point underdogs, and Southern Methodist, both of whom were considered contenders to make it to the AAC title game this year. Even Tulsa’s lone loss was a good one. It came by the way of in-state rival Oklahoma State, who gutted out a 16-7 win where the Hurricane easily covered as 24-point underdogs.

So, how has Tulsa done it? Well despite their name, there isn’t much flashy about the Golden Hurricane. They just get the job done. They have a balanced attack led by QB Zach Smith (that name certainly isn’t flashy), who is completing 61 percent of his passes for 1,250 yards with 10 touchdowns and six picks, while the run game is averaging 5.3 yards per carry.

Meanwhile, the defense is strong against the run, is giving up 21.8 points per game, and matches up well against this Tulane team.

The Green Wave are 4-3 SU and have been a great bet going 6-1 ATS this season. They have won three in a row, but all have come against lesser competition. The Wave are a run-heavy team behind Stephon Huderson and Cameron Carroll, but face a Tulsa run defense that is allowing just 3.6 yards per carry.

On defense, Tulane has been shredded by the passing game, giving up 275 yards per game through the air, which ranks 105th in the country.

Tulsa will do its best to take away the Tulane running game and force QB Michael Pratt (55 completion percentage) to beat them. While the Green Wave will have issues slowing down the Hurricane attack. Take the home team before the number gets to seven.

The total for this matchup is 53.5 as of Tuesday morning, which sounds about right for a matchup of these two teams. The average total the last six times Tulane and Tulsa have faced off is, you guessed it, 53.5, with the Over going 5-1 over that six-game stretch.

Tulane likely won't be able to keep up with its season average of 36.7 points per game in this one, but getting three or four scores is certainly not off the table. Tulsa has been pretty stout when it comes to giving up points for the most part, but have allowed 54 points over the last two games. Tulane also allows 27.6 points per game and, as mentioned, should have trouble keeping down Tulsa’s balanced attack. The trend should continue as this number is a touch too low.

Tulsa is sitting pretty in second place in the AAC, but they have been prone to slow starts this season, as the Golden Hurricane have averaged just 2.4 first-quarter points through their first five games. With the slow Tulsa starts and the fact that Tulane should have a tougher time than usual moving the football in this game, there could be a bit of a feeling-out process early on. Bet the first quarter to be a low-scoring one. 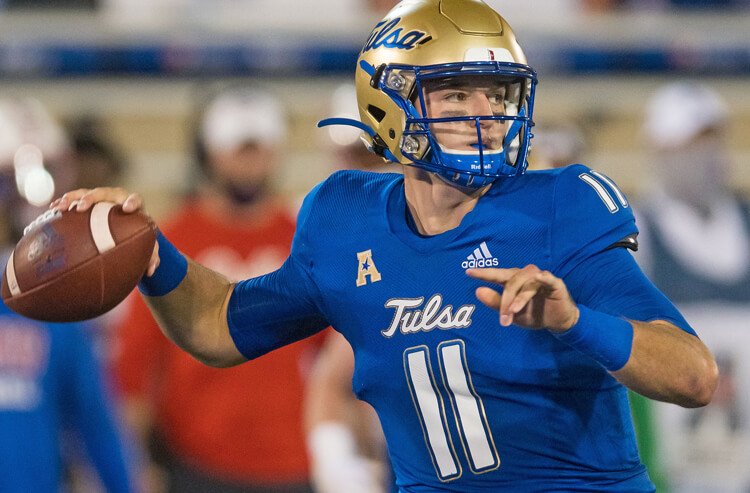 Tulane vs Tulsa picks and predictions for November 19
Provided by