Suns vs Trail Blazers Picks and Predictions: Back Booker to Torch Blazers

Phoenix is on a back-to-back, but they crushed the Lakers so thoroughly last night that they spent most of the game in cruise control. Find out what that means for Portland's porous D with our Suns vs Trail Blazers picks.

After a late-night blowout of LeBron James and the Los Angeles Lakers on Friday, the Phoenix Suns face the Portland Trail Blazers at the Moda Center on Saturday. Having to face the Blazers on the road is a tough task on any occasion, but it’s especially rough on the second night of a back-to-back.

The betting odds have the Blazers pegged as slight favorites in this one, but will Portland ultimately get the job done? Keep reading our Suns vs. Blazers picks and predictions to find out.

The Blazers opened as 2.5-point favorites over the Suns and the line seems to be staying put at the moment. Meanwhile, the total opened at 233.0 in this one and has since gone down as far as 231.5 — despite more people backing the Over.

The Suns are 9-4 against the spread in their last 13 games following an ATS win. Find more NBA betting trends for Suns vs. Trail Blazers.

The Suns are playing on back-to-back nights, but they should still be able to take care of business against this Blazers team. Last night, Phoenix blew out Los Angeles — a game that got so out of hand that Anthony Davis and Dwight Howard were fighting on the bench — and the Suns had such a comfortable lead in the fourth quarter that they were just walking the ball up the floor and passing it around to run the shot clock down. With that in mind, these players should be feeling somewhat fresh when they take the floor tonight.

Portland normally has an edge in the backcourt every night, but that won’t be the case against Chris Paul and Devin Booker. Those two are more than capable of winning their matchup against Damian Lillard and C.J. McCollum, but the Suns have the edge at nearly every other position on the floor. And Phoenix even has the better bench, where guys like Cam Payne, Cam Johnson and Landry Shamet give the Suns a big lift whenever they come in.

Phoenix also wins the clash in styles between these teams, as Portland was just 29th in the league in defensive rating a year ago and the Suns finished sixth in the league in that category. Monty Williams has his team fully bought-in and he preaches a two-way approach to the game. The Suns sweat the minor details on a nightly basis, which just can’t be said for the Blazers. And while Portland did make some minor roster changes this offseason, the team showed that it hasn’t changed all that much in a 124-121 home loss to the Sacramento Kings Wednesday night.

Overall, the Suns showed last night that they are still the same team that nearly won a championship last season. They should be able to roll into Portland and come away with an outright victory.

The Blazers generally like to get out and run a bit, and they are very much a team that cares more about what they do on offense than defense. However, the Suns play to the strengths of 36-year-old Paul, which means they are often slowly getting the ball up the floor and taking their time to execute their half-court offense. Phoenix was in the bottom 10 in pace of play last year, and that’s not likely to change this year. The Suns also really lock in defensively, making this total just seem a little too high.

With this being the second night in a row that the Suns are playing, look for Phoenix to lean a bit more on Booker to make sure they aren’t putting too much on Paul’s plate. After a 12-point performance in a loss to the Denver Nuggets in the season opener, Booker bounced back and had 22 against the Lakers last night. The Suns star looked a lot more comfortable and really found his rhythm offensively in that game, and he now faces one of the worst defensive backcourts in the league.

With McCollum likely guarding him for the majority of this contest, don’t be surprised if Booker easily scores his season-high in this one. Last year, Booker averaged 29.0 points per game in three meetings with this Blazers team and he’ll be looking forward to getting his numbers in this one.

Did you know that if you parlayed today’s NBA Suns vs. Trail Blazers predictions and picks in a single-game parlay, you could win $59.58 on a $10 bet? 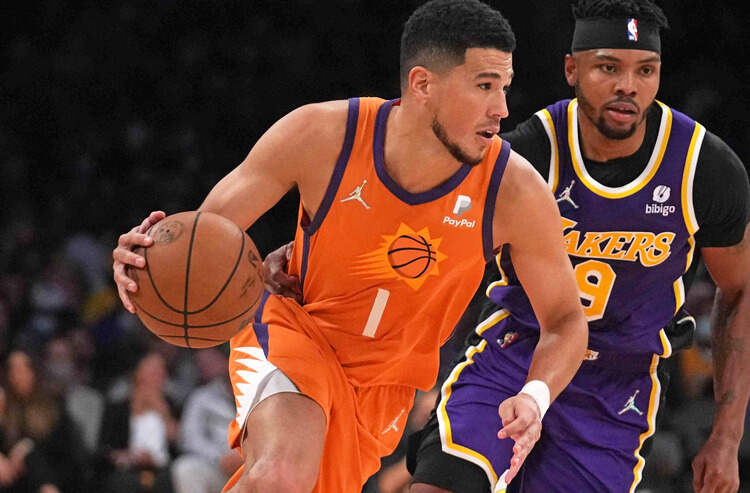 Suns vs Trail Blazers Picks and Predictions: Back Booker to Torch Blazers
Provided by