Mavericks vs Raptors Picks and Predictions: Raptors Can Flex on D vs Mavs

Dallas is looking to bounce back from its weak opening effort, but a defense-minded Toronto squad that found its groove Friday night awaits. Find out if Luka can keep a cool hand tonight with our Mavericks vs Raptors picks.

The Toronto Raptors look to ride the momentum from their Friday night triumph over Boston forward as they face the Dallas Mavericks on the second night of a back-to-back.

The Mavs looked pretty terrible in their season debut against Atlanta, and will try to pick up their first win under new head coach Jason Kidd.

Find out who to back for NBA betting as we break down our Mavericks vs Raptors picks for Saturday, October 23.

The line opened at Dallas -3.5, where it has remained. The total opened at 216.5 at most books and has been bet down to 215 across the board.

Under is 5-1 in Raptors' last six games following a straight-up win. Find more NBA betting trends for Mavericks vs. Raptors.

Mavericks vs Raptors picks and predictions

After a season opener in which their offense looked like a clogged toilet, the Raptors detonated on the road Friday night, swarming the Celtics in a 115-83 blowout.

After a slow start against Boston, everything started humming for Toronto: Fred VanVleet looked more comfortable initiating the offense, rookie Scottie Barnes put on a very convincing Kawhi Leonard impersonation, and supporting scorers were finding the bucket with ease.

At least part of this can be attributed to a completely laughable effort by the Celtics, but give the Raptors credit where it's due. They played disruptive defense and made the most of the opportunities Boston coughed up.

Dallas, meanwhile, looked absolutely lost in its lone contest so far: a 113-87 drubbing at the hands of the Hawks. The Mavs shot a putrid 33 percent from the field and seemed all out of sorts on defense.

The Hawks were able to throw many rangy defenders at Luka Doncic, and no Mav outside Jalen Brunson was able to make them pay when the ball was forced out of their Slovenian maestro's hands.

There's plenty to be skeptical about with Dallas: everything from Kristaps Porzingis' wavering health, to the massive downgrade on the sidelines from Rick Carlisle to Jason Kidd. The Raptors have a similar swarm of athletic, long-armed defenders that can make life hell for Luka. And while Doncic is undoubtedly one of the best players in the NBA, it remains to be seen if Kidd is creative enough, or the rest of the roster capable enough, to give him the support he needs.

Toronto's defense has been an agent of chaos so far, forcing 23.5 turnovers per game (second in NBA) and ranking fifth in opponent field goal percentage. Given the numerous options the Raps have to blanket Doncic, it seems optimistic that Kidd and the Mavs' supporting cast can be laying points after how dreadful they looked against ATL.

It's tough to give either team here much credit to push the total in this matchup.

Granted, Toronto looked great in dropping 115 points Friday night, but that looked like more of a best-case scenario given an offensively thin squad that's missing its top scorer. Boston looked to completely give up in the second half, spoon-feeding the Raptors countless buckets both in transition and halfcourt sets. Toronto will be hard-pressed to replicate that effort.

Meanwhile, Dallas likely won't shoot as poorly as it did against Atlanta, but this Raptors defense is no joke, and it has plenty of means of disrupting Doncic's flow. I'm very skeptical of Kidd's ability to out-coach Nick Nurse's defensive adjustments, and even a marginal improvement over the Mavs' 87-point turd against Atlanta puts them nowhere near this game's total.

The two-way offense just isn't likely to be there in this one.

The Raptors needed a gift-wrapped half to do the damage they did on the scoreboard last night, and their young corps of long-armed wrecking balls are more than capable of disrupting Dallas in perpetuity.

So much of Dallas' excellence on offense in the past was Carlisle knowing how to create space and motion around Doncic, and Kidd has frankly never measured up to that genius in several coaching stints.

Toronto's been a median-paced team under Nurse, while the Mavs were one of the slowest teams in the NBA last year, returning largely the same personnel. So, this matchup is unlikely to randomly turn into a track meet, unless the Raptors start running off TOs en masse, in which case the Mavs won't be scoring anyway.

Too much will have to go right for this to push the Over.

Did you know that if you parlayed today’s NBA Mavericks vs. Raptors predictions and picks in a single-game parlay, you could win $26.45 on a $10 bet? 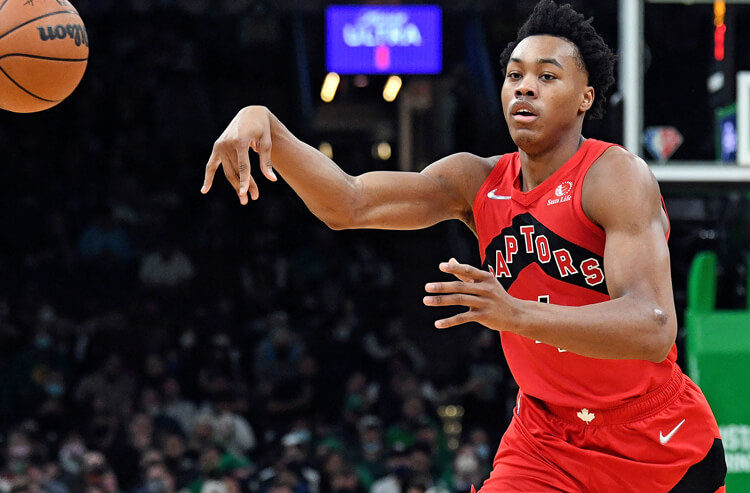 Mavericks vs Raptors Picks and Predictions: Raptors Can Flex on D vs Mavs
Provided by

Cavaliers vs Raptors Picks and Predictions: Toronto and Cleveland Struggle to Pour in the Points
Andrew Caley | Nov 28, 2022

Hawks vs 76ers Picks and Predictions: No Embiid, No Problem for Philly's Defense
Ed Scimia | Nov 28, 2022