Today’s NBA Player Prop Picks: Back Morant to Continue Lighting It Up

We're early in the NBA season, but there's still plenty of value across a multitude of player prop markets. Check out our best NBA prop picks for Saturday, including Ja Morant's offensive explosion to continue.

With just half a week's worth of games played in this young NBA season, we don't have much of a sample to lean on when it comes to pilfering props.

That said, we still have some revealing matchups and trends dating back to last season that help paint a solid picture of what we can expect for this weekend's action.

Let's put the info to work and check out our best NBA player prop picks for Saturday, October 23.

As we noted in our Mavericks vs. Raptors preview, the Raps' defense looks legit so far, while the Mavs' offense was horribly out-of-rhythm against Atlanta.

Obviously, preternatural phenom Luka Doncic will figure out a way to get Dallas flowing, but it may take some time given his inconsistent surroundings and a Jason Kidd offense that, at face value, figures to be a huge downgrade from Rick Carlisle's crafty brilliance.

To boot, it will be even more difficult for Doncic to weave gold out of his teammates with all of the Raptors' rangy, switchable defenders zeroing in on him. It will be tougher to exploit them in the pick-n-roll, and what's worse, even if Doncic does create solid looks for his teammates, it's tough to trust them to convert after Dallas shot 33 percent against Atlanta.

Doncic will likely flirt with double-digit assists, as he does on an almost nightly basis, but against this tangled web of defense, it seems more likely that he falls short of the mark.

You'll probably notice the heavy juice we're paying here, but it's a tradeoff for the extra cushion, as this prop sits at 9.5 virtually everywhere but bet365.

Wolves sophomore Anthony Edwards announced himself in a big way over the second half of his rookie campaign and picked up right where he left off, touching up the Rockets with 29 points in his 2021-22 debut.

Edwards was 6-12 from long range in that game, pushing his average to 3.5 made 3-pointers over his past ten games, dating back to last season.

The Wolves habitually play at a fast pace, meaning Edwards should have plenty of opportunities to launch against most opponents. Tonight's foe, the New Orleans Pelicans, were 23rd in defensive rating last season, and coughed up 122.5 ppg in two games this season, good for 26th.

With inexperienced defenders lining the Pels' backcourt, count on Edwards to keep riding this trend and hit the Over again.

The Memphis Grizzlies' young star PG has been making one hell of a statement lately.

Obviously, it's just one game, but Morant leads the NBA in scoring after dropping 37 points on 59 percent shooting against Cleveland in the season opener.

But Morant also averaged 30.2 ppg against the league's best defense (the Utah Jazz) in the opening round of last season's playoffs, after lighting up Golden State's fifth-ranked defense for 35 in the play-in game.

While the Clippers still project as an above-average defensive team, Reggie Jackson is nowhere near the defender Patrick Beverley was, and Eric Bledsoe has to prove himself after a lost season in New Orleans.

Bank on Morant to fade a large regression and clear this total.

Did you know that if you parlayed today’s NBA player props in a single-game parlay, you could win $46.37 on a $10 bet? 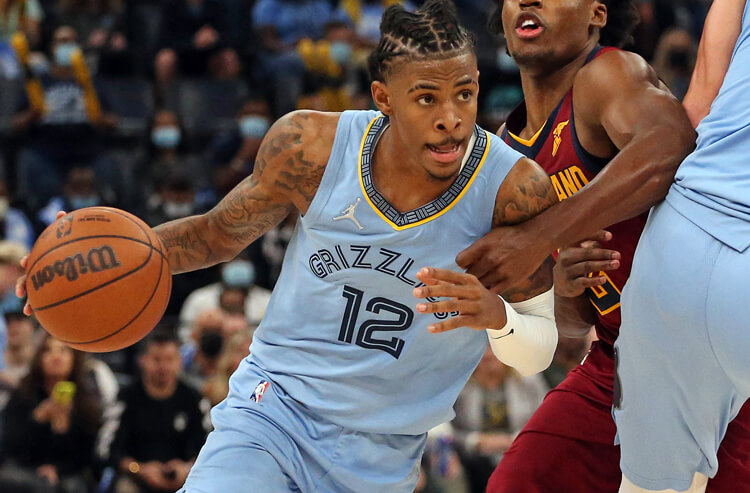 Today’s NBA Player Prop Picks: Back Morant to Continue Lighting It Up
Provided by