Nets vs Bucks Game 3 Picks and Predictions: Can Milwaukee Be Trusted As a Home Fave?

The Nets enter Game 3 as a road underdog as the series shifts to Milwaukee. After a pair of lopsided losses to fall down 0-2, can the Bucks be trusted as a -3.5-point favorite? Find with our best Nets vs. Bucks picks and predictions.

The Milwaukee Bucks bring an 0-2 series hole home when they host the Brooklyn Nets in Game 3 of their NBA Playoffs Eastern Conference semifinal Thursday.

The Bucks are 3.5-point NBA betting favorites in Game 3 after being blasted by 39 points in the second game of the series Monday. Milwaukee is hoping the extra day between games and the swing in venue can get its offense on track, after posting an offensive rating of just 97.0 the past two games.

Here are our free NBA picks and prediction for Nets vs. Bucks on June 10.

Milwaukee opened as a 3.5-point favorite at TwinSpires Sportsbook, briefly reached -4, then returned to -3.5, where the line rests at 4:45 p.m. ET. Brooklyn is taking the bulk of tickets and mpney, at 77 percent and 83 percent, respectively. "The Nets are our biggest liability of the day," TwinSpires trading analyst Zachary Lucas said. The total is down a tick, from 234 to 233.5, with the Over drawing 72 percent of tickets/61 percent of money.

The Over is 36-16 in the Bucks’ last 52 games playing on two days’ rest. Find more NBA betting trends for Nets vs. Bucks.

Milwaukee’s offensive issues are bleeding over into its defensive success against the mighty Nets. The Bucks have relied far too much on isolation and their ball movement, which helped lead this team to a league-best 120.1 points per game, but it hasn’t been the same in the opening two games of this series.

The team recorded only 14 assists in Game 2, with the Nets’ defensive switches disrupting the offensive flow for Milwaukee. The Bucks got bogged down in too many one-on-one options and didn’t make Brooklyn work that hard on defense. And that’s a problem.

With a team as potent with the points as the Nets, you almost have to play defense on offense: slowing the tempo and limiting their possessions while also making them expend energy on the defensive end. So far, Brooklyn’s ho-hum defense hasn’t had to do much to stop Milwaukee and that’s left plenty in the tank for the other end of the floor.

Offensively, the Nets would be a tough check for any team. Even with James Harden out of action, this scoring attack hasn’t missed a beat in the opening two games of the series (offensive rating of 120.6). Brooklyn can push tempo in transition, yank defenders around the floor for an open look with ball movement, and continues to eat up opponents in isolation with Kevin Durant and Kyrie Irving getting every shot they want.

Milwaukee’s defensive strategy to pack the paint and not give up easy inside looks worked fine and well against the perimeter-challenged Miami Heat in Round 1, but Brooklyn is more than happy living beyond the 3-point line in this series.

The Nets are knocking down over 44 percent of their 3-point this series, for a total of 36 triples so far. And while the Bucks have bruised the Brooklyn interior for 124 total points in the paint, the Nets are happy to trade 3’s for 2’s when Milwaukee is shooting just 44 percent from the field.

Bookies are expecting a new-look Bucks team in Game 3, giving it the benefit of the doubt as a 3.5-point favorite, but we haven’t seen anything in this series that would indicate Milwaukee is worthy of laying this many points. Brooklyn has turned out postseason profits, with a 6-1 ATS mark so far and is 19-7 ATS in its last 26 games overall.

Brooklyn is not a great defensive team. The Nets are active and have guarded against the 3-pointer well in the postseason, limiting foes to 32.5 percent shooting, but Milwaukee has pounded them in the paint and is shooting almost 65 percent from inside of eight feet of the bucket.

The switch in venue should help struggling shooters Khris Middleton and Jrue Holiday, who are a combined 6 for 22 from beyond the arc in this series, and the offensive tempo of the semifinal has been pretty quick for playoff standards: 99.50 pace rating.

The first two games saw closing totals of 239.5 and 238.5, with the Bucks and Nets staying well Under those numbers. The books have made a knee-jerk reaction to 234 points for Game 3 back in Milwaukee, where the Bucks’ No. 1-ranked regular-season scoring attack should see an uptick in production — if it can get back to basics on the offensive end.

The Nets are... well, the Nets. Brooklyn is going to get its buckets.

If you’ve read my previous playoff previews or follow me on Twitter (@CoversJLo, shameless plug) during the postseason, you’re aware of the infamous “0-2” NBA Playoffs trend. If not, here’s the skinny:

NBA teams down 0-2 in the series and playing at home in Game 3 are 73-42-8 ATS versus the first-half spread (63%) since 2007. I’m not big on betting trends but this one is great because the math adds up. You have a desperate team playing in front of their home fans and wanting to put up a good fight — at least in the opening 24 minutes.

Recently, oddsmakers have gotten wise to this remarkable system and have slowly siphoned the value out of its gas tank. The trend is just 9-10-1 1H ATS since 2018 (omitting the 2020 neutral-court bubble postseason) and 1-2 1H ATS so far this year.

Books are still padding those qualified home teams in Game 3, which is why we have Milwaukee (a 3.5-point full-game fave) set as 3-point first-half chalk tonight. This 1H spread should be somewhere in the -1.5 to -2 range. There are some Bucks -2.5 1H out there but you’ll pay extra vig to get books to budge that much.

Once more into the fray... 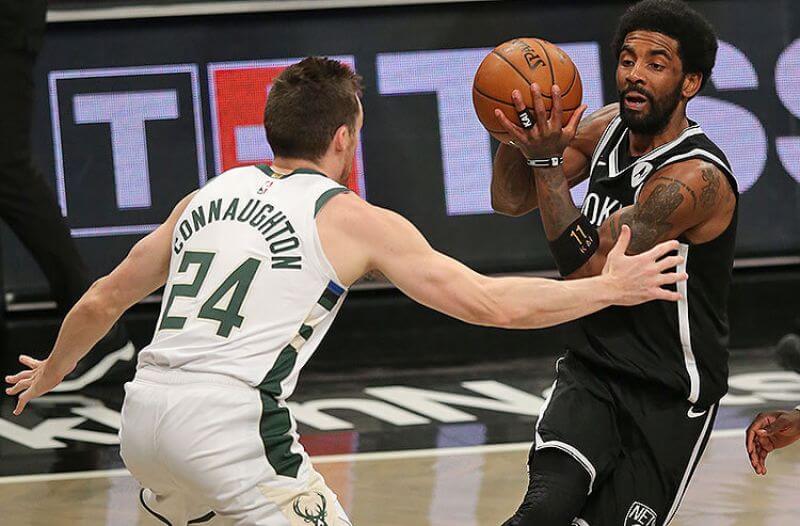 Nets vs Bucks Game 3 Picks and Predictions: Can Milwaukee Be Trusted As a Home Fave?
Provided by