Lakers vs Celtics Picks and Predictions for January 30

After a disappointing loss to the Pistons, everybody should expect LeBron James & Co. to come out with maximum fire for a rivalry match with the Boston Celtics.

Tonight, the Boston Celtics host the Los Angeles Lakers, renewing one of the better rivalries in all of sports. This year, both of these teams have high expectations, which only makes it more exciting. Tipoff is at 8:30 p.m. ET at the TD Garden in Boston, Massachusetts.

Will Boston be able to take care of business at home? Keep reading our Lakers vs. Celtics picks and predictions for Saturday, January 30 in order to find out.

The Celtics are 0-4 ATS in their last four games against teams with winning percentages above 60 percent. Find more NBA betting trends for Lakers vs. Celtics.

Shortly before an 8 p.m. ET tipoff, the Lakers are 3-point favorites at FanDuel, up a half-point from a couple of hours ago. The betting splits are similar, albeit a shade lower on LeBron James and Co., with Los Angeles getting 77 percent of spread bets and 78 percent of spread money. The total is still stuck on 218.5, also with splits similar to earlier today, as the Over is attracting 84 percent of bets/83 percent of money.

If the Lakers were taking on the Celtics in front of a packed Boston crowd, it wouldn’t be as tempting to take them as small road favorites — but that’s not the case here. And overall, backing one of the best teams in basketball after two disappointing losses in a row seems like the right move tonight.

The Lakers come into this game having lost to the Sixers and Pistons in each of their last two games, so they’ll be looking to prevent a three-game losing streak in this one. That means that everybody should expect LeBron James & Co. to come out with maximum fire for a rivalry like this one.

One thing to point out here is that the Celtics aren’t Top 10 in defensive rating this season, and they have generally been somewhat beatable on that end of the floor. That means a Lakers team that likes to slow it down and pick its spots should be able to really put forth an efficient effort in this one. And while the Celtics are a Top-10 offensive team, they’re facing the top defense in all of basketball.

You should monitor Anthony Davis’ health (he’s been a constant GTD this year) before backing Los Angeles in this one, but he should really dominate if he is able to give it a go here. It also wouldn’t be surprising if Dennis Schroder gets it going in this game, as the Celtics are weakest at defending the point guard position.

The Under has hit in each of Los Angeles’ last four ATS losses. While that might not seem all that significant, it does suggest that the Lakers are capable of getting back to their defensive roots when they are coming off a performance they aren’t exactly thrilled with. And to say they weren’t happy with their last outing would be an understatement.

Los Angeles lost outright as a 7.0-point road favorite against Detroit on Thursday. They allowed the Pistons to shoot 46.0 percent from the floor, so it’s just hard to imagine the Lakers not bearing down and defending at a high level tonight. Meanwhile, the Celtics are a solid defensive team, and the Lakers don’t put up a ton of points on a good day.

Daniel Theis has been an underappreciated two-way center for the Celtics over the last couple of years, but his point total seems a bit high for a game like this. Assuming Davis plays in this one, the Lakers have the personnel to make things difficult on him here.

Davis is an elite defensive big, whether he defends power forwards or centers. Meanwhile, Marc Gasol is still excellent on that end of the floor, and even Montrezl Harrell has been a positive defensively this season. All three will see some time defending Theis. 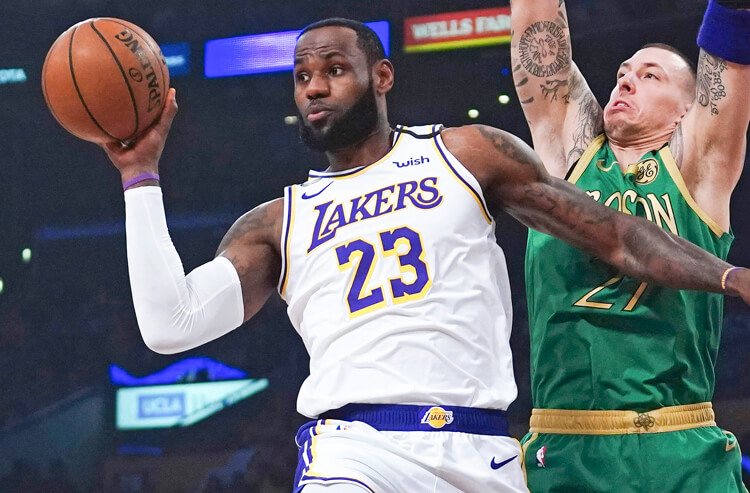 Lakers vs Celtics Picks and Predictions for January 30
Provided by