Celtics vs Mavericks Picks: Can Celts Wake Up?

The Boston Celtics' season is coming apart at the seams, and tonight, they have a road date with a team that very recently shook off its own bad mojo.

Their opponents, the Dallas Mavericks, are 6-2 SU in their past eight games, after previously having dropped six in a row. They're scoring with ease, and will be a tough takedown for a Celtics unit that looks lost.

Let's take a look at this game's NBA betting prospects with our free Celtics vs. Mavericks picks and predictions for Tuesday, February 23.

Over is 7-1 in Mavericks' last 8 overall. Find more NBA betting trends for Celtics vs. Mavericks.

Calling this season a disappointment in Boston so far seems like a polite way of putting things. The Celtics have been disturbingly flappable, sitting sixth in the East at .500, far closer to the play-in round than they are the conference crown. Their last five games include a thumping by the doormat Wizards and Sunday's OT loss to the Pelicans, in which they blew a 24-point lead.

Meanwhile, Dallas has responded very well after a possibly-overreacted-to-six-game losing streak (which included five straight games against the Nuggets, Jazz and Suns). The Mavs have rattled off six of eight wins since then, playing only one gimme (against Minnesota).

Boston could easily respond with some fire after its last meltdown, but it's getting very little offensive support outside of Jaylen Brown and Jayson Tatum, which doesn't bode well against Dallas.

A huge catalyst for this game will be the status of Kristaps Porzingis (listed as questionable with back stiffness). Having not played in a week heading into a back-to-back with tonight's game nationally televised, Zinger's absence last night was likely more of a selective rest than a serious injury.

Keep an eye on Porzingis' status, but if he's activated for tonight, this is a slam-dunk Mavs bet, given that they're getting points at home against one of the NBA's most inconsistent teams.

The Mavs are the NBA's hottest Over bet this side of Brooklyn, going 7-1 to the Over in their last eight games. Their offense has been scorching, dropping 122.5 ppg over that stretch. Hell, they even hit the Over versus the Hawks.

It's not entirely surprising, given that Dallas had the NBA's best-ever offensive rating last year. Yes, there's been a bit of roster shuffle and some revolving parts, but give Rick Carlisle a generational talent like Luka Doncic and it's only a matter of time before he figures things out.

Boston itself has been putting up 115.5 points on average over its last four—and Dallas hasn't exactly been clamping down defensively over the past month. If the Mavs force Boston's hand by scoring out of the gate, this game could trend to the Over quickly.

On the season, both teams play at a Bottom-10 pace, which is a bit of a misnomer to their respective current forms. Unless Dallas has a random terrible shooting night, or this game is a blowout, we should see the total cleared.

For all the praise that Tatum rightfully still receives, it's Brown who has very arguably been the Celtics' more consistent player this year. He's averaging basically the same amount of points on fewer shot attempts, upping his scoring efficiency across the board.

Brown has also become a far more dynamic playmaker, with his assist rate more than doubling from 9.7 to 20.4 percent. Still rebounding at a similar rate, he's generally far more of a threat to stuff box scores this season.

He's averaged a combined 34.9 points + rebounds + assists on the season, clearing his 32.5 total in that market for this matchup. Given that we're anticipating a high-scoring tilt, it makes sense to count on him playing a big part in putting those numbers on the board. 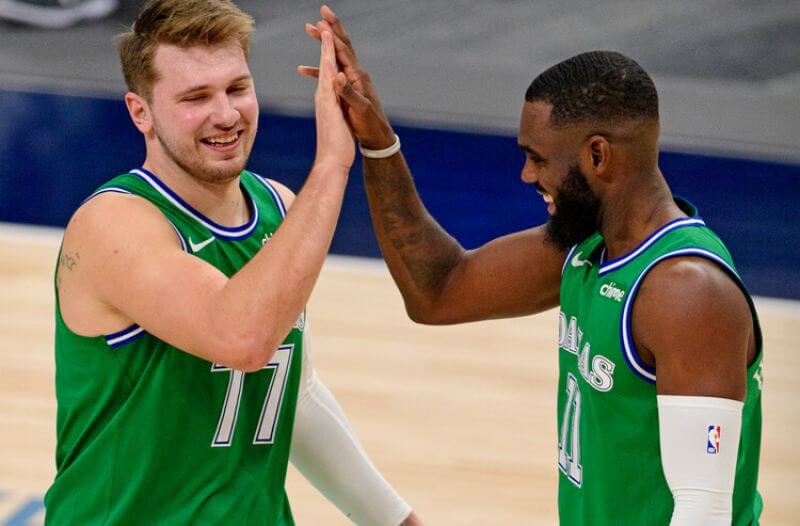 Celtics vs Mavericks Picks: Can Celts Wake Up?
Provided by