The Bombers have woken up from the plate this month, and two shaky starters take the mound as they invade Fenway. We're counting on fireworks in this one — get the lowdown with our Yankees vs. Red Sox picks.

A 7-2 hot stretch has the New York Yankees feeling good as they look to topple one of the two teams ahead of them in the American League East standings.

The Yankees kick off a three-game series with the Boston Red Sox at Fenway Park on Friday, fresh off taking two of three from the Kansas City Royals. They open the day four games back of division-leading Tampa Bay and 3 1/2 games behind the runner-up Red Sox, who relinquished top spot in the division after dropping two of three to the Rays earlier in the week.

Here are our complete betting preview and picks for Yankees vs. Red Sox, with first pitch scheduled for 7:10 pm ET.

Domingo German (4-4, 4.17 ERA): Following an impressive May in which he posted a 2.40 ERA, German has hit the skids in June. The 28-year-old hasn't made it past the sixth inning in any of his four starts in the month while boasting an ugly 7.11 ERA. He has also given up seven home runs over his previous five appearances, and 14 in just 69 innings this season.

Martin Perez (5-4, 4.32 ERA): Perez is going through a similar stretch to that of his counterpart, having recorded a 6.75 ERA through four June starts after impressing with a 2.60 ERA in May. Perez did, however, bounce back nicely last time out with five strong innings against the Royals after allowing 11 runs in just 3 1/3 innings in losses to Houston and Toronto.

The Yankees have won five of their past six games at Fenway Park. Find more MLB betting trends for Yankees vs. Red Sox.

The Yankees' offense has really hit its stride in June after getting off to a miserable start to the 2021 campaign. New York has hit the second-most home runs in the majors since the beginning of the month (36) while ranking fourth in slugging percentage (.462) and walk rate (10.7 percent), fifth in wRC+ (118) and eighth in on-base percentage (.332).

The Red Sox have been surprisingly potent at the plate for most of the season, but have settled into the middle of the pack in the majority of offensive categories for the month of June. They're 17th in OBP (.313), 20th in wRC+ (95) and 23rd in home runs (23) while posting a dismal 7.5-percent walk rate that is higher than just six other major-league teams.

With both pitchers boasting similar stat lines for the season (though Perez has at least curtailed his HR/9 compared with years past), we like the Yankees as the superior hitting option (even though their numbers against left-handed pitching for the season place them near the middle of the league). Take the visitors to open the series on a winning note.

This game is going to create a bit of a conundrum for total bettors. The number is understandably high (10.0) given the potency of both offenses, and yet, the Yankees are just 32-41-1 O/U for the season while the Red Sox are 36-38-1 O/U.

Road games with high totals have brought out the best in that Yankee offense (along with the vulnerability of the pitching staff), with New York having converted the Over in four straight away contests with totals between 9 and 10.5. They're also 10-3-1 O/U in their last 14 as a favorite, and that has a lot to do with how the offense has come alive after slumbering through the early weeks.

Add in the fact that Boston has cashed the Over in five of its last six games as an underdog, and that both starters are susceptible to the long ball against even the most ordinary offenses, and the conditions are ripe for a high-scoring affair. 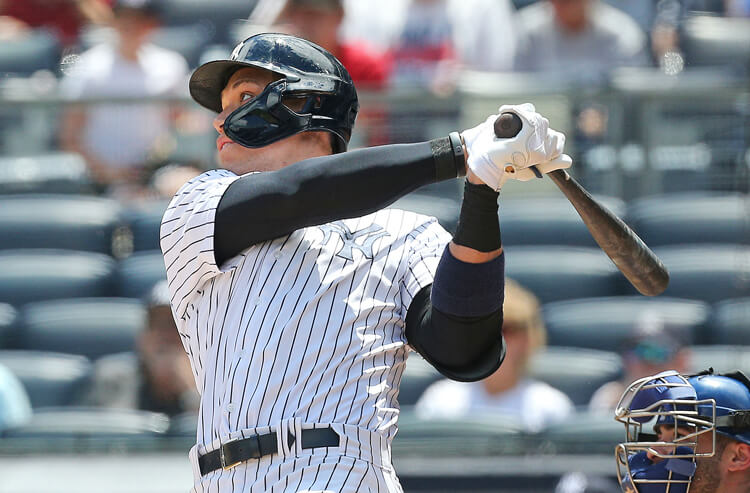