Angels vs Rays Picks and Predictions: Back the Bats?

L.A. comes into this one as dogs in MLB betting, but with a superior lineup in a game with two suspect starters, are the books missing something? Find out with our Angels vs. Rays picks for Friday.

The Tampa Bay Rays bounced back from a seven-game losing streak by taking the final two games of their series with the Boston Red Sox to climb back into first place in the American League East.

Now, the Rays welcome the Los Angeles Angels and AL MVP betting favorite Shohei Ohtani to the Trop for a three-game weekend set. Can the Rays keep rolling as favorites, or does Ohtani give the Angels value as underdogs?

Check out our MLB free picks and predictions for Angels vs. Rays on Friday, June 25 with first pitch scheduled for 7:10 p.m. ET.

Griffin Canning (5-4, 5.07 ERA): It has been a tough season for Canning, but the right-hander has strung together back-to-back solid starts. Canning has allowed three earned runs on eight hits in 11 2-3 innings of work against the Royals and A’s.

Josh Flemming (6-4, 3.59 ERA): Fleming, who sometimes works behind an opener, gets the start in this one and it has been an up-and-down season for the lefty. His last three starts have been a microcosm of that, pitching four innings of shutout ball sandwiched by two games where he allowed five runs in each.

The Over is 7-0 in the Angels' last seven road games. Find more MLB betting trends for Angels vs. Rays.

The Rays snapped their seven-game losing streak by taking the final two games of their series against Boston, limiting the hard-hitting Red Sox to just two runs in those contests. Meanwhile, the Angels enter this series losers of three in a row and six of their last nine overall.

The current slide has dropped the Angels back into fourth place in the AL West and they are there for one reason. Pitching. Starting pitching in particular. The Angels rank 25th in the MLB when it comes to starters ERA and it will be on guys like Griffin Canning if they want to turn it around.

The Halos are hoping Canning’s recent success is a sign of things to come. If the right-hander can locate his fastball, he should be able to be somewhat effective against a Rays team that doesn’t hit for a great average and strikes out more than anyone in baseball.

But the Rays rotation could be a bit of a concern as well. With Tyler Glasnow expected to be out for an extended period of time, the Rays are going to have to fill some innings and guys like Fleming will have to step up.

While the lefty has been excellent at times this season he has been very inconsistent lately, pitching to a 5.14 ERA and allowing nearly 9.5 hits per nine innings. Fleming also allowed three runs on six hits in five innings of work to the Angels back on May 6.

That Halos lineup, led by Shohei Ohtani, now ranks eighth in scoring, fourth in batting average, fifth in OPS, and seventh in home runs. At this price, it’s worth taking a shot with the Angels.

When it comes to the total, 8.5 looks a little low at first glance. For starters, a potent Angels lineup that averages 4.96 runs per game will have a chance to do some damage against Fleming, but the Rays should be able to do their part as well.

While Tampa doesn’t hit for a great average they always seem to get that clutch hit and, as a result, the Rays rank 10th in scoring, plating 4.82 runs per game. And if Canning can’t control his fastball, he is susceptible to giving up walks and getting his pitch count up quickly. Which is just one of the reasons for his 5.09 ERA.

But that also means he can get yanked from a game early and then has to hand the ball to an Angels bullpen that ranks 25th in ERA and 26th in WHIP. We like this one to get Over the number. 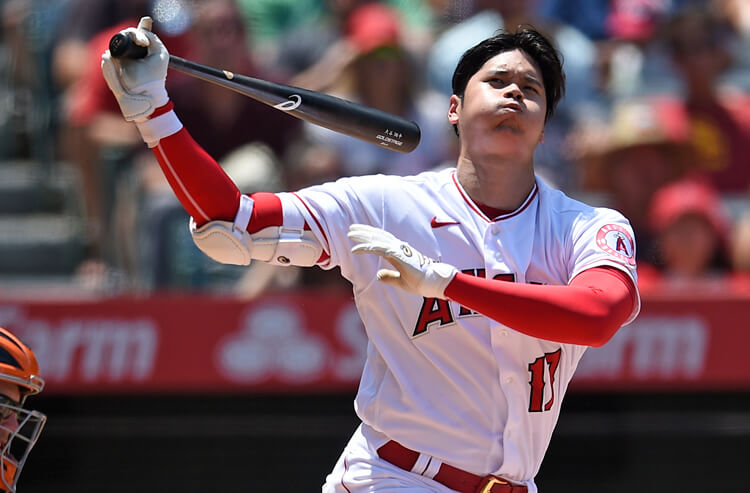 Angels vs Rays Picks and Predictions: Back the Bats?
Provided by