The Cardinals have stunk at the plate, but tonight they face a pitcher who's been even fouler. Find out how to exploit this matchup, along with the rest of our best MLB prop picks from Friday's action.

We hit a homer with our MLB prop bets yesterday when we backed the Pittsburgh Pirates' underwhelming bats against an even more underwhelming starting pitcher for the Cardinals. But turnabout is fair play and now we're looking at their St. Louis opponents in a similar situation.

We're also betting on one of the best pitchers in the big leagues in Carlos Rodon and riding a hot hitter on the New York Yankees as we bring you our best free MLB prop bets and predictions for Friday, June 25.

One of the biggest narratives of the first half of the 2021 MLB season has been the brutal batting of the New York Yankees. After years of being at the top of majors across all hitting metrics, the Bronx Bombers failed to live up to their nickname despite a loaded lineup.

A big reason for that turnaround has been the sizzling play of catcher Gary Sanchez. The two-time All-Star is batting .347 with seven homers and 16 RBI in his last 14 contests.

Today, the Yankees will be matching up against Red Sox starter Martin Perez who has a 4.32 ERA this season, with the number blowing up to 5.67 over his last six starts.

Sanchez has been mashing against southpaws like Perez, with an OPS of .912 against lefties this year. He also has a history of excelling in Boston, crushing eight doubles and nine home runs with a slugging percentage of .656 in 93 at-bats at Fenway Park. Expect another big performance from the Yankees slugger and take the Over on his total bases.

The Seattle Mariners begin a three-game set in the Windy City against the AL Central-leading White Sox. After a couple of awful seasons, the Mariners have actually been competitive this year and are two games above .500. That said, they are still terrible at the plate, where they rank second-last in the majors with an OPS of .664.

Today, the M's will face off against the White Sox and southpaw Carlos Rodon, who is having a breakthrough season two years removed from Tommy John surgery.

With Seattle ranking 27th in the majors with 2.58 runs per game through the first six innings, take the Under on Rodon's earned runs allowed.

The Pittsburgh Pirates had lost nine games in a row to their rival St. Louis Cardinals until last night, when they smashed them by a final score of 8-2. We're not going to sugarcoat this: the Cardinals stink, especially at the plate.

Despite, on paper, having a decent lineup led by proven sluggers like Paul Goldschmidt and Nolan Arenado, the Cards are just 27th in the majors with 3.91 runs per game. They've been even worse lately, plating a pathetic 2.31 runs per game over the last 15 days.

That said, their recent poor form makes their team total a relatively low 4.5 today, which is ripe for the picking against Bucs starter Wil Crowe.

If you didn't want to immediately fade Crowe, based purely on the spelling of his first name, you will after you read his stat line. The sophomore is 0-4 in nine starts this season with a 6.42 ERA, and 1.57 WHIP, and opponents have an absurd OPS of .848 against him. The Pirates bullpen has also struggled lately, with Pittsburgh relievers collectively pitching to a 5.02 ERA over the last 15 days.

With the Cards scoring at least five runs in four of six meetings against the Pirates this year, expect a bounce-back game from their batters. 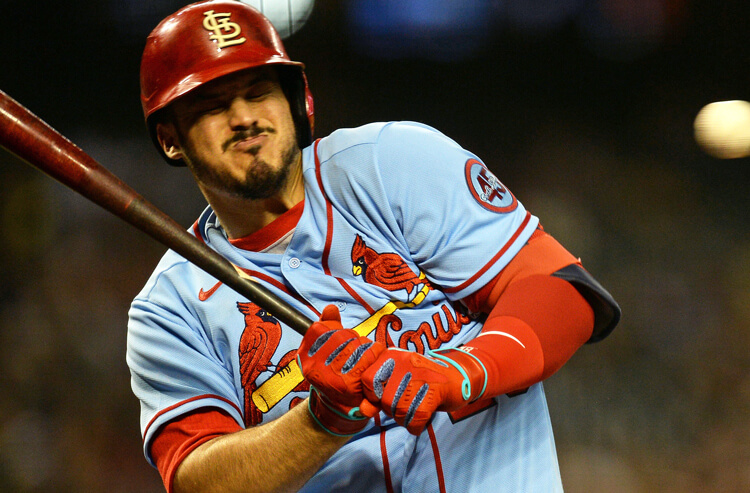