The Bay Bridge Series renews tonight, with both Oakland and San Francisco among the best teams in the majors. Find out who has the edge for Friday's matchup with our A's vs. Giants picks.

The MLB betting board for Friday night is headlined by the Bay Bridge Series between the Oakland Athletics and San Francisco Giants.

Games between these interleague rivals are always fun and the stakes are even higher this year with both the A's and Giants currently near the top of the MLB standings.

The Giants are slim +101 home underdogs for the first contest in this three-game set at Oracle Park.

Here are our best free A's vs. Giants picks and predictions for Friday, June 25, with the opening pitch scheduled for 9:45 p.m. ET.

The southpaw is coming off a strong outing against the Yankees where he struck out 11 batters and allowed three hits and two runs in 5 1-3 innings.

The Over is 17-8-2 in the last 27 meetings between these California-based clubs. Find more MLB betting trends for A's vs. Giants.

The Giants and A's have been mashing, with San Fran third in the majors with an OPS of .761, and the A's second in the majors in OPS on the road at .771. The big difference maker should be on the mound, where the A's will start Sean Manaea and the Giants will go with Johnny Cueto.

Manaea has been the better pitcher this season and has been lights-out lately. In his last six starts, the lefty has pitched to a 1.19 ERA with a 1.06 WHIP, while allowing just one home run through 37 2-3 innings.

Cueto ranks below the Top-250 starters in the majors in opponent batting average at .292 and he has allowed two homers in each of his last three starts. With the A's 4-0 in the last four meetings between these teams in San Francisco, back them again tonight.

With Brandon Crawford and Buster Posey leading the way, the Giants are currently third in the majors in scoring with 5.03 runs per game. Led by Matt Olson and his 20 home runs, the A's have also enjoyed success at the plate, ranking sixth in the majors with 4.94 runs per game on the road.

Despite dealing with an injury to star third baseman Evan Longoria, the Giants have been red-hot with the bat lately. Over the last 15 days, they have an OPS of .836 and they have plated a whopping 8.5 runs per game in their last eight contests.

The A's have also been crushing the ball in recent weeks, posting a .827 OPS over the last 15 days and averaging 6.17 runs per game in their last 12 contests. They should be in for another big day against a struggling pitcher in Cueto.

The Over has cashed in five of the Giants' last six home games and the A's are 8-3 O/U in their last 11 games overall. Ride the sizzling sluggers on both sides and bet the Over. 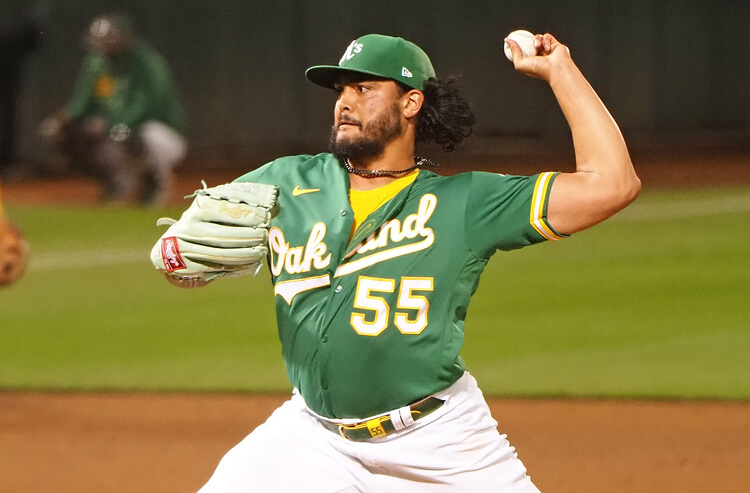 A's vs Giants Picks and Predictions: Manaea Gives A's the Edge
Provided by