What a turnaround for the Oakland Athletics! After starting the season 0-6, the A’s have now won 10 games in a row and they’ll try to extend it to 11 straight when they go for the series sweep against the Minnesota Twins in a matinee matchup.

The Twins, meanwhile, are battling the combination of a slow start and COVID issues, and as a result, have dropped eight of their last nine. But the Twins hope Kenta Maeda can stop the bleeding and are slight MLB betting favorites for this game.

Check out our MLB free picks and predictions for Twins vs. A’s on Tuesday, April 21, with first pitch scheduled for 3:37 p.m. ET.

Kenta Maeda (1-1, 3.07 ERA): Maeda has battled through his first three starts of the season, as the right-hander has struggled with his command and as a result has a 1.70 WHIP. However, he hasn’t been burned by that yet, allowing two earned runs or fewer in all of his starts. Maeda gets an extra day of rest heading into this matchup.

Frankie Montas (2-1, 4.91 ERA): Much like the A’s this season, Montas has bounced back after a rough start. The hard-throwing sinker-ball pitcher got roughed up by the Angels in his first start of the season but has allowed just one run on eight hits while striking out 12 batters over his last two starts.

The Twins are 6-22 in their last 28 games in Oakland (Ed note: update after late-night doubleheader). Find more MLB betting trends for Twins vs. A's.

So, how have the A’s turned things around so drastically, and so quickly? To put it simply, they have improved in every facet of the game. The hitting has come around. The starters are giving quality outings. And as always, the A’s play great defense.

Prior to Game 2 of Tuesday night’s doubleheader, the A’s had scored six or more runs seven times during their winning streak and have the third-highest team OPS over the last 15 days. The A’s also work a lot of counts and that could mean trouble for Maeda, who has struggled with his command this season.

As for the starters, the A’s got six innings or more of solid work seven times during the first nine games of their winning streak, with Montas responsible for two of those. That has allowed their bullpen to be rested and effective. The A’s have given up just 2.33 runs over that stretch. That doesn’t bode well for a slumping Twins’ lineup.

Mix in the A’s excellent fielding percentage and we like them as slight dogs in this matchup.

As noted, Montas is in a groove right now, giving up just one run over his last 12 innings and a quick look at the matchups tells you he should be in tough against the Twins. But while Minnesota ranks in the Top 10 in runs, batting average, and OPS, it has scored three runs or fewer in seven of its last nine games—including getting shutout in Game 2 of last night’s doubleheader.

On the other side, Maeda has fought his control this season, but is capable of putting on a strong performance at any time, and the fact he has just a 3.07 ERA shows how much he has battled. And while A’s are swinging some hot sticks at the moment, they're still hitting just .202 against righties for the season.

Additionally, the Under is 8-1 in Maeda's last nine starts as a favorite and 4-0 in Montas' last four starts against AL Central opponents. This one has pitcher’s duel all over it—take the Under. 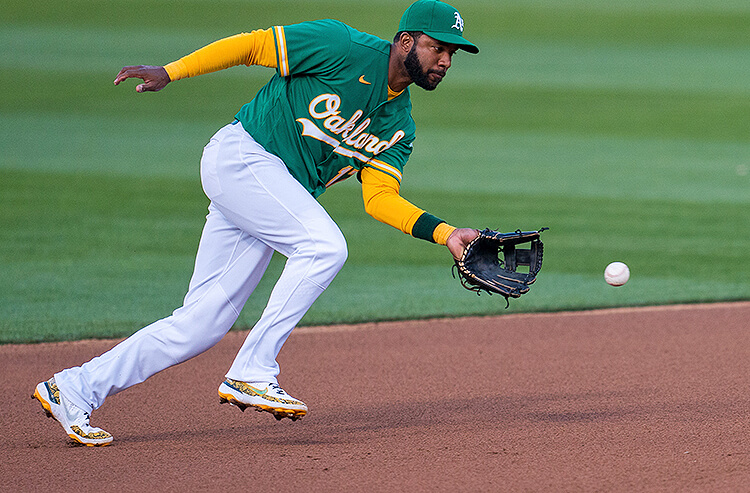 Twins vs A's Picks: Oakland Opens as Dog Despite 10 Straight Wins
Provided by