The Washington Nationals bounced back with a one-run win Tuesday after getting clobbered 12-5 by the St. Louis Cardinals the day before and will now turn to their ace Max Scherzer for the series finale.

Scherzer, coming off a vintage performance, will be opposed by struggling Cardinals right-hander Carlos Martinez. Washington is going for consecutive victories for just the second time this year with a chance to end its seven-game homestand with a winning mark.

Here are our best free MLB betting picks and predictions for Cardinals vs. Nationals on April 21, with first pitch scheduled for 4:05 p.m. ET.

Carlos Martinez (0-3, 7.80 ERA): The once-promising righty is on his way to another forgettable season. His fastball has never been slower, his strikeout rate has never been lower, and he has one of the top hard-hit rates among all starters. Martinez was a valuable reliever for the Cards in 2019 but since moving back to the rotation last season he has a ghastly 9.00 ERA and 1.80 WHIP, and he's served up homers at a rate that's going to ensure his outings are short. He's gone exactly five innings in each of his three starts and didn't eclipse that mark once last season.

Max Scherzer (0-1, 2.37 ERA): Scherzer's still doing his thing at 36 years old and with tons of mileage on his arm, which is impressive. The Nationals ace isn't walking anyone, is punching out more than 30 percent of the batters he faces, giving him one of the best strikeout-to-walk ratios in baseball. The veteran is coming off his best outing in three starts this season, as he threw seven scoreless innings of two-hit ball and struck out 10 in a win over the Arizona Diamondbacks.

Cardinals: Tyler O'Neill OF (Out).
Nationals: Juan Soto OF (Out).
Find our latest MLB injury reports.

The Over is 4-0 in Martinez's last four road starts. Find more MLB betting trends for Cardinals vs. Nationals.

Unless you think Martinez is suddenly going to turn in his best game of the season, the Cardinals are a non-starter on the moneyline. The Nationals look to be, too, as there's little value to be found with them clocking in as a -170 favorite, though that has come down from the opening -181 line.

So, the question becomes: Do you trust Scherzer enough to silence the Cardinals' bats and take a last-place Nationals team on the runline?

Scherzer wasn't great in his Opening Day start against the Atlanta Braves, serving up four solo bombs, but he did strike out nine. Then he threw a quality start against the juggernaut Los Angeles Dodgers, holding them to one run over six innings, before dominating Arizona and looking like the Scherzer of old. He'll now get a Cardinals team that has dropped seven of its last 10 after starting off the season with a 5-2 record.

St. Louis hasn't been great offensively but it is hitting for power, entering Wednesday's matinee tilt with a major league-tying 25 homers on the season. If Scherzer can avoid repeating what happened to him against the Braves, he should have another strong start today and go deep into this game.

Washington will be without its best player, Juan Soto, after the 22-year-old superstar landed on the injured list with a shoulder injury ahead of Tuesday's game. Losing Soto is a huge blow to a struggling Nats offense, but looking for the best value while still being practical of likely outcomes, taking Washington on the runline is the play today.

One trend to watch in this game is Scherzer's sky-high fly-ball rate, which is particularly concerning in this matchup if you're the Nationals because the Cardinals have been bashing homers. Scherzer's fly-ball rate through three starts is easily the highest mark of his career at an enormous 64.3 percent. That's the top mark among all starting pitchers and it's led to the highest home-run-to-fly-ball rate of his career, too, though he hasn't allowed a bomb since giving up four to Atlanta.

It does, however, continue a trend from last season. The future Hall of Famer set career highs in home runs per nine innings and HR/FB rate in 2020, so we might not just be looking at small sample size noise.

The Cardinals have some big boppers in their lineup, including corner infield stars Nolan Arenado and Paul Goldschmidt, but it's shortstop Paul DeJong who is pacing the club with a team-leading five dingers. As tough of a matchup as Scherzer is for any team, St. Louis is tagging everyone and puts the ball in the air at the seventh-highest rate in the game, so don't be surprised if Mad Max's recent susceptibility to serve up the long ball bites him in this contest.

Washington's offense hasn't been great — the Nats are tied for the second-fewest runs scored in MLB with 54 — and looks a lot worse without Soto and his .410 on-base percentage near the top of the lineup, but it doesn't take a great offense to beat up on Martinez. Washington should do most of the heavy lifting offensively, but Scherzer seems destined to run into some home-run troubles and ultimately drive up the score.

While most teams have been cashing Unders early on, the Cardinals have gone Over at the seventh-highest clip in baseball and we expect enough offense today to get past the total of 7.5.

Did you know that if you parlayed today’s MLB Cardinals vs. Nationals picks, you could win $32.00 on a $10 bet? 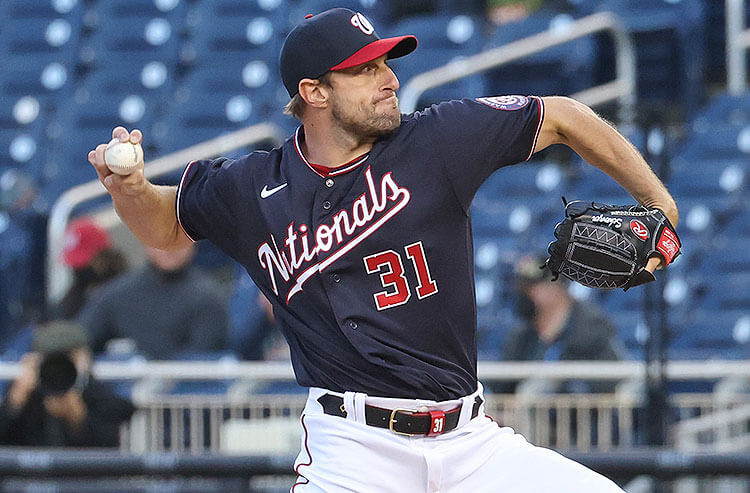